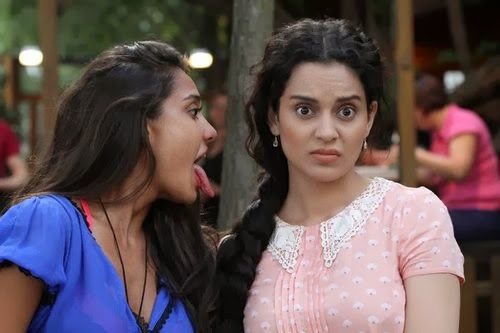 Rarely do Indian filmmakers make women centric films. And even if they do, the depiction doesn’t rise above women as either sympathetic characters or contrastingly, femme fatales. In rarest of rare cases, women are celebrated. Queen is one such rare film. Not only does it celebrates womanhood, but also shows a middle finger to Indian men, most of whom are neck deep in their chauvinistic, domineering spirit towards women.

Profusely entertaining and profoundly meaningful, Queen is coming of age tale of a woman [Rani/Queen] who goes through a journey of self-discovery, self-awakening and most importantly, in the course of that journey, she finds her self-identity. An identity that isn’t dependent on what her to-be husband wants her to do or wishes her to be. That woman, a simpleton middle class girl of Rajauri, is played by Kangana Ranuat in a tour de force performance that exudes warmth, charm and hilarity in equal measures. A performance so richly nuanced that she is pitch-perfect in everything she does; be it in her body language, her accent or even her tiniest expressions. Watch her dance after a drinking binge and you will know what I am talking about. A performance, which is so phenomenally brilliant that it should fetch her National Award for Best Actress (she deserves nothing less).

To regard Queen as just a little comedy would be grossly undermining its nuanced brilliance. Within all its glorious simplicity, lies a incisive, scathing commentary on the mindset of countless Indian men who think their wives to be their property instead of partner. But that’s not all what the film is about. It’s also about friendship, which knows no boundaries and can happen anywhere, with anyone irrespective of the differences we might share. One of the other great aspects of the film that I extremely liked was how subtly it encourages racial equality. But within all the well-intentioned ideas, lies a story full of adventure and compassion that is immensely entertaining to watch.

Fascination and fetish of Indians of grand weddings and honeymoons are well known and that’s what director cleverly utilizes as his premise. An incomplete honeymoon that needs to be completed; with or without the husband. And he couldn’t have chosen two better cities than Paris and Amsterdam. Paris is an epitome of a city where beauty and chaos go hand in hand. Amsterdam, sex capital of the world, serves well for the awakening of Rani, sexual or not, hardly matters.

In the end, Queen is a film that again proves that the first step towards making a great film is to have well-written and refined screenplay. And to top it up, if you have someone giving as good performance as Kangana does in the film, you are in the striking distance of an exceptional film. You only have to give it finishing touches, which in this case, director Vikas Bahl does. And that too, with unparalleled perfection. If at all, I have any qualms with the film, it’s not within the film itself, but rather its title. An english title like “Queen” which hints at royalty doesn’t do justice to a grounded, endearing, very “un-queenly” character like Rani. A minor quibble, I would say, which shouldn’t stop you from watching this true gem of a film.