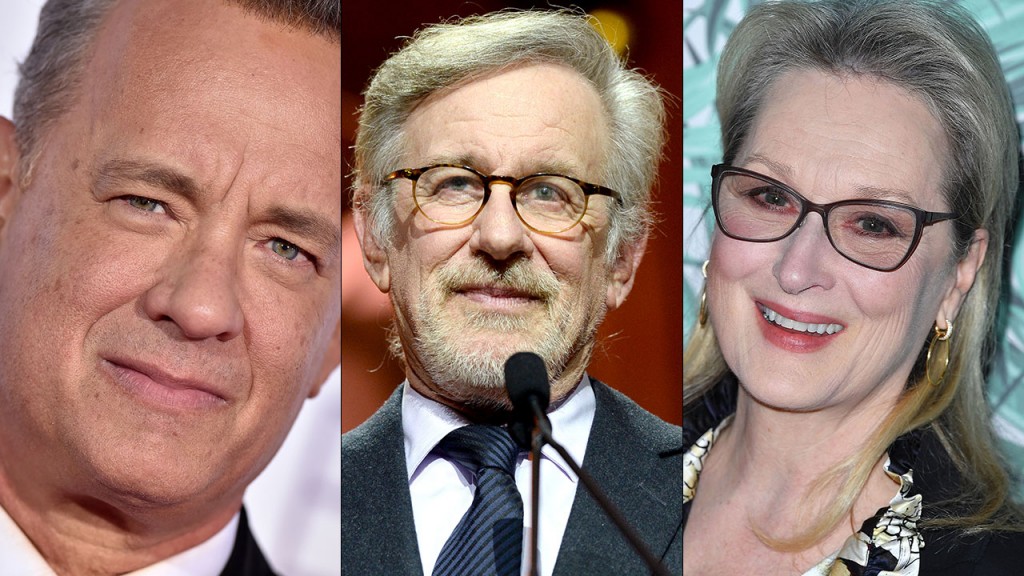 Steven Spielberg’s newspaper drama ‘The Papers’ started shooting this week, and as with most of his films will be edited as they go; the film will be in select theatres in December to qualify for the Oscars with a wider release in January. Tom Hanks teams with Spielberg again, their fifth film together, and Meryl Streep will work with the director for the first time on screen, though she did voice work in A. I. (2001).

The film explores how in 1971 the Washington Post came into possession of the Pentagon Papers, which detailed and outlined the absolute futility of the war in Viet Nam, as well as guarded government secrets going back four decades. The paper came under extreme scrutiny from the White House and Nixon administration, and shortly after this story broke, so did Watergate which of course led to the Nixon resignation.

Now some of this has been documented, and brilliantly in All the President’s Men (1976), directed by the great Alan J. Pakula, but I am interested to see the Spielberg take on it all and the director has stated his film will focus on the Pentagon Papers.

The screenplay must be fantastic because the director bumped a long cherished project to move on this fast, and both Hanks and Streep cleared their slates to do the film. It is the kind of important, topical film we need right now, something with substance and meaning, a film with purpose. Could it bring a return to the types of films we saw in the seventies when cinema railed against the establishment, commented fiercely on the state of Washington? It is no secret Spielberg, Hanks and especially Streep are not supporters of Trump, and the film makes a strong case for the importance of a free press, something Trump has tried vigourously to block.

I for one am thrilled it is coming.

Now what I hope does not happen is what took place in 2005 with his superb film Munich. For six months leading up to the release of the film, bloggers and Oscar prediction sites had Munich winning Best Picture and Best Director, no other films that year mattered. But oh how they did, Brokeback Mountain (2005) took TIFF by storm with rave reviews. Still Munich (2005) held fast with online writers.

Then it is released and IS a masterpiece, but cold, distancing its audience as the lead character had to distance himself from the killings he was committing. It was a stroke of genius on the part of Spielberg, but not all critics got it, even less audience members. Indeed it was nominated for Best Picture and Best Director, but it’s hold on those two slots stopped once it was released. A shame because I count Munich (2005) among the masters finest work, a bold, daring for him to make and in the manner he made it.

The film industry has evolved and changed drastically, even for Steven Spielberg. There was a time he could make whatever film he wanted with whatever budget he needed, though in fairness he has always been frugal with money, especially that of the studios. But for his superb drama Lincoln (2012) he had trouble raising the funds to get it made! Spielberg! They throw untold millions at a young hot director of TV or music videos for the latest blockbuster or coming book film, but cannot put up the money for Steven Spielberg? Shameful really.

When he decides to tackle a serious historical subject he goes all in, nothing is left to chance and the results are usually perfection. Schindler’s List (1993), Saving Private Ryan (1998), Munich (2005), War Horse (2011), Lincoln (2012) and Bridges of Spies (2015), Best Picture nominees all, well reviewed films all, five of them bonafide masterpieces, War Horse (2011) not quite making that grade.

Last year The BFG (2016) was the years best film nobody saw, a warm and delightful fairy tale for kids of all ages that should have been a huge hit, but despite strong reviews never quite found the audience. The same thing happened with Minority Report (2002) named Best Picture by Roger Elbert, absolutely one of the years best, one of the directors best films, but it was not near the blockbuster it was pegged to be.

With that said, here are 5 reasons why I think ‘The Papers’ could be a big Oscar player.

In times of unsettled political climates, cinema is often at its best offering a look behind the scenes at the inner workings and corruption of politics and reporting the news in truth. Trump is a dangerous, unstable President, with an arrogance that makes him more dangerous than any man told the office. He is not there for America, he is there for Trump. His attempts to block news reporting when it does not side with him is alarming because it is precisely what Hitler did. Perhaps because of the current political climate Spielberg pounced on the chance to make a film about the importance and value of a free press. A film about the citizens right to know about what their government is doing. Literate, powerful and accurate the story rules here, as it did with Lincoln (2012) and Spielberg has evolved enough as a director to make the film free of ego, let the story be the star.

2. Trump and The Political Climate

Trump has done more harm in his first six months as President than any other leader did in two full terms. I dare say he is on the path to doing as much harm as Hitler to the freedoms held as a right in the United States. For the first time in my life, I feel genuine fear about the President, his ignorance in world affairs, foreign policy, his attitude towards the Constitution, and the manner in which he has shamed the highest office in the land. Connections to Russia? Banning the press? Threatening to withdraw news conferences? Using terrible events to further his own agenda? Lying, firing good people who were on to him, surrounding himself with family and yes men, we are headed towards something terrible. Films is always at its finest during political crisis.

One of the most gifted directors in the history of the cinema has grown, evolved and matured throughout his career, learning from his mistakes, never repeating them, challenging himself with his work, balancing popcorn movies with serious fare, the man is a genius. For years when he first emerged academic and snobbish film critics dismissed him as a director of films for children (really? Like Jaws?) rather than look deeper and see him as a major imaginative talent. In the years since Schindler’s List (1993) he has consistently challenged himself and his audiences with an array of diverse and brilliant films. Sure there are missteps, but show me another director who does not fail from time to time? One of the greats, if not the greatest.

It certainly does not hurt any film to have the greatest actress in the history of the cinema, and one of the greatest actors headlining your film. Both bring intelligence to the work, and because the story is smart, sharply written and real, you need actors who can transcend the word making them their own, inhabiting the characters in every way. Streep has twenty Academy Award nominations and likely deserved a couple more, has won three Oscars, easily deserving at least three more. She has enjoyed success at the box office late in her career when actresses struggle just to get work. Hanks has been royally shafted by the Academy for the last sixteen years. After owning the nineties with consecutive wins in 1993 and 1994, another two nominations, one other performance that should have won him a third Oscar, he has not been nominated since Cast Away (2000) his finest performance. Despite Award worthy work in Road to Perdition (2002), The Terminal (2004), Hanks not the film, and more recently Captain Phillips (2013), Saving Mr. Banks (2013), Bridge of Spies (2015) and Sully (2016) nothing…no nominations. That is, though it is not, a joke. Hopefully this can right what has been wrong for nearly two decades now. Hanks will be tackling the role of Post editor Ben Bradley, the tough as nails chief portrayed by Jason Robards in All the President’s Men (1976).. and he won an Oscar.

The director has been keeping his eye on the best in TV and has cast many of them in the film, making it, easily one of the most exciting ensembles of the year. Sarah Paulson, Alison Brie, Carrie Coons, Bradley Whitford, Tracey Letts, Zack Woods, Michael Stuhlbarg, Bruce Greenwood and Bob Odenkirk are among the extraordinary group of actors assembled for this picture. In a word, wow.