10 Reasons Why ‘Taxi Driver’ is a Masterpiece 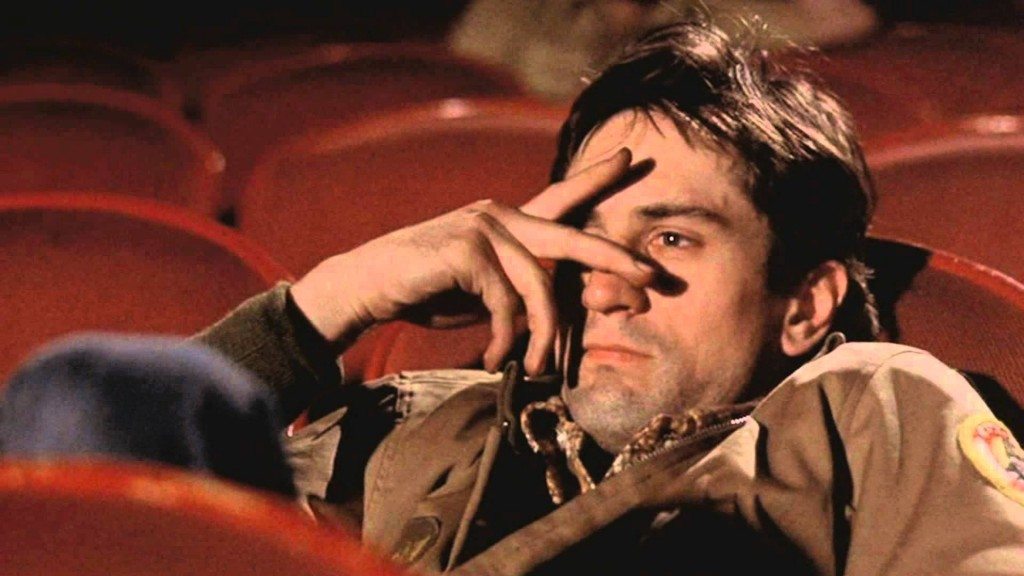 Taxi Driver (1976) is among the darkest films ever made, and no question among the finest. A troubling study of a man breaking first from family, then society, and finally reality, the tension filled movie is like watching a timer on a bomb tick down, we know it is going to explode though we are not sure what will happen when he does.

I saw the film opening day using a fake ID to get in, there were perhaps twenty people in the theater. I emerged two hours later galvanized in some way, forever changed, my idea of cinema forever altered. 1976 was a very good year for film, and Taxi Driver was bested, for me, only by All the Presidents Men (1976). It felt as though Scorsese took his cameras into the streets and shot what he saw, which is pretty much what he did. The atmosphere, the look and feel of the streets became a hugely important character in the picture.

Mean Streets (1973) had demonstrated that Scorsese could make a good film, Taxi Driver (1976) proved him an artist for the ages.

One of those fateful, perfect merging of Director with a story and screenwriter, with an actor, and knowing precisely how to tell the tale best describes Scorsese and this film. He read the script, loved it and dove in making New York the gateway to hell, the demons just below the sewer grates which seem to smoke with escaping sulphur just below the surface. He shot on location, taking his cameras directly into the streets, often without permits and permissions to capture the street life with absolute realism. His work with De Niro was a relationship built on trust, and he placed his absolute trust in his young actor, who felt free to improvise and experiment while shooting. Scorsese wanted a volcanic eruption of violence, knowing we have built slowly to it, and when it happens it is with seething anger, and gruesome authenticity. The film announced the arrival of a new artist, something you could feel while the film was unspooling.

A former film critic and historian Schrader exploded into movies with this picture and would work with Scorsese many more times and direct films himself, Hardcore (1979) which bore a resemblance to Taxi Driver. He had lived in New York, deeply impacted by what he saw around him. Suicidal at one point, he wrote this script in less than three weeks. Art should come so easy to us all.

“Are you talkin’ to me? Are you talkin’ to me?” Those words became iconic, improvised by the actor when turned loose by the director, and displaying a startling understanding of the role. Alone in his room, practicing with his weapons, taking heat for pain endurance, Travis is slipping over into the abyss. Hoping to blend in, he shaves his head into a Mohawk cut, wears dark glasses, and behaves bizarrely enough for the Secret Service to be concerned, and they are right to do so. De Niro radiates danger. Menace from the first moment we see him, there is something off about him, something dangerous. When the bloodbath happens, we think that is it, but after catching the madness in his eyes in the rear view mirror at the end, we know he will explode again, because the ticking has begun. De Niro won Best Actor Awards from the New York Film Critics and the National Society of Film Critics. That he was nominated but did not win the Oscar is criminal.

While most kids were playing with Barbie dolls, Foster was becoming an actress, and a might fine one at that. Thirteen years old when cast as a twelve year old prostitute, Foster was superb, creating the portrait of a troubled young woman, believing an older man loves her. Quietly looking for an escape that Travis will provide. Can we picture Iris in Minnesota going to school, sleepovers? No, but we believe she will embrace the chance she has been given because she saw the chance Travis took and how far he was willing to go, seemingly for her. She will never know it was an act of madness.

Jittery, hopped up on speed and cocaine, Matthew, known as Sport is a Pimp, a predator of little girls who cannot believe this man loves them. He does not love them of course, he exploits them for his own purpose. Jovial on his step, he takes the money of men looking to have sex with a child. To Travis he is the sickest sort of human being you can encounter, and it is him he shoots first. Keitel, like De Niro radiated a sense of danger, but he made a fatal mistake in not taking Travis seriously.

6. Bernard Hermann and the Score

The percussion that announces the film’s opening and is repeated through the film is like a march toward doom. The Score feels and sounds like a heartbeat for the film, often seductive, but the under current is something nasty, as though preparing us for the slaughter to come. He died after putting the Score tracks down.

Beyond capturing the filth and squalor of Times Square, we can all but feel the walls of Travis’ apartment closing in on him. That pan from above over the final, horrific crime scene is frightening, giving us a full view of what Travis has done. The camera captures the hell that Times Square is, right from the shot at the opening of hell percolating just beneath the surface, waiting to explode from the bowels of the earth. Gritty and real, which is what made it truly great.

8. Times Square in the Seventies

New York City in the seventies was a chess pool of hookers, triple x movie theatres and peep shows, drug pushers on ever corner in broad daylight, massage parlours, strip shows often mixed with live sex shows, and Times Square was the hub of all things depraved. Scorsese captured that hellish world beautifully, giving the film a profound sense of anger, something felt in the hateful looks shared by Travis (De Niro) and those he encounters on the street.

Never in my life had I seen such stunning, realistic violence. Fingers are blown off, the back of a man’s head splatters against a wall, shocking but happening with absolute realism. Cinema had seen violence before, but never like this bloodbath, not ever. The blood that drips like water from De Nita’s fingers literally shows the blood on his hands. Shocking. And forever seared into the landscape of the mind.

Beautifully put together, not a weak or poor choice from the editor. The film feels forever like a nightmare which is what the writer envisioned. Scorsese took the story and created a dark masterpiece, the darkest sort of art, the images he gave the editor were masterful. And not a single, poor choice was made.