Review: Another Round is Funny and Poignant 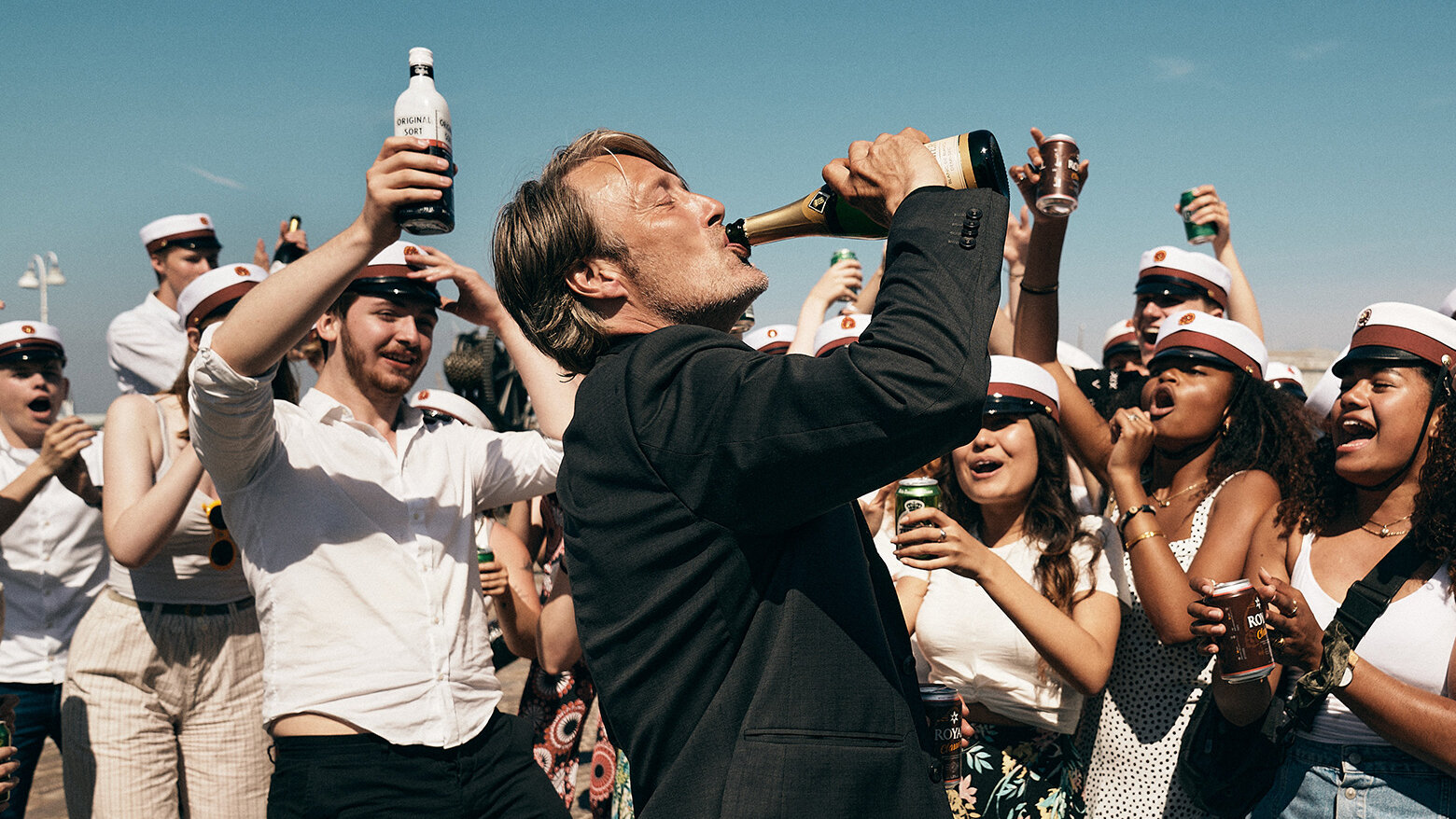 Following Another Round‘s BAFTA and Oscar wins for International Film, it was safe to say that the pressure was on for it to impress general audiences once it was released overseas. But once again director Thomas Vinterberg and lead actor Mads Mikkelsen have proven they’re a match made in heaven with this darkly funny, deeply poignant tale.

The duo have previously teamed up on 2012’s controversial film The Hunt, which saw Mads Mikkelsen playing Lucas, a teacher whose life is dramatically impacted by a lie his young student told. He plays a teacher again in Another Round, the character of Martin, who is bored and isn’t living up to his full potential both in his professional and personal life. It seems as though he’s simply coasting along, rather than enjoying his everyday life. All this changes though, when he and a group of friends are inspired to follow a rather unorthodox philosophy.

Inspired by Norwegian psychiatrist Finn Skårderud’s belief that the human body has an alcohol deficiency, Martin and three of his friends put this theory to the test, by attempting to keep their blood alcohol content (BAC) at a constant rate of 0.5%. At first, this seems to be a good idea, and everyone involved in this reckless experiment realise they’re able to perform better at work, in their romantic relationships, and that they’re more cheerful and successful on the whole. At one point, one of them declares that they hadn’t “felt this good” in ages, but of course, it wasn’t going to be this plain sailing for long as things gradually start to go downhill.

It would have been easy for this film to glorify the effects of alcohol, the buzz, the way it gives you “Dutch Courage” to do things you never would have done sober. But the most remarkable thing about Another Round is that it manages to keep its views on alcohol balanced throughout. It’s neither encouraging nor lecturing and instead presents the highs and lows of intoxication in very honest ways.

The characters in Another Round are very easy to connect with, and you find yourself genuinely rooting for Martin and his friends Tommy (Thomas Bo Larsen), Nikolaj (Magnus Milang), and Peter (Lars Ranthe) as they embark on this experiment together. We’re encouraged to laugh with them, cry with them, and fully immerse ourselves in their lives which are intimately crafted before our very eyes. You want these characters to succeed and be happy, which makes things even harder when it inevitably starts to go south.

Another Round reflects the incredibly Danish culture of excessive drinking, but it will certainly resonate in other countries as well, as we’ve all been guilty of having a bit too much and making a fool of ourselves, wallowing in our own regrets with a sore head the next day. The film is both very Danish and very relatable for a wider audience as we watch these men become increasingly more reckless as the alcohol flows through their veins.

It’s not just the lead characters who shine either, as special praise must be given to child character Specs, a shy, loner child who wears glasses and is on a football team with the rest of his class. Despite not having much dialogue at all, his presence in the film was so powerful and he had such a genuine connection to his teacher and fellow students as the storyline progressed. Indeed, it’s Specs’ presence and those of the other students that propel the film forward, as we see genuine connections between students and teachers before, during, and after alcohol consumption.

In some ways, this reckless experiment helps students, as it ignites a teaching style they would never have experienced otherwise. There are some passionate, wonderful scenes throughout Another Round that almost prove the theory, which are quickly quenched by the repercussions of frequent heavy drinking.

Another Round also features soap opera elements, particularly when it comes to stories of domestic life. It’s no secret that alcoholism and/or binge drinking can affect relationships and families, which the film certainly explores in an interesting way. The deeper these men go with their experiment, the more their relationships start to suffer, and what was once humorous drunken activities turns into something more serious.

Despite the predictability of this narrative, it doesn’t feel any less devastating, and there are still some awful moments that you might want to have tissues on hand for. We’re expecting things to go downhill but when they do, our affections for these characters never seem to waiver because we genuinely care about them and their journeys, however reckless. This film is so gorgeously crafted, and it transports you into the lives of those involved to the point where you almost feel like you’re right there with them.

Another Round is a funny, poignant, devastating piece of cinema and everyone involved should be so proved of what they achieved. Everyone should seek this out as it’s deserving of each award it’s received.