Review: ‘Ben-Hur’ is an Unnecessary Remake 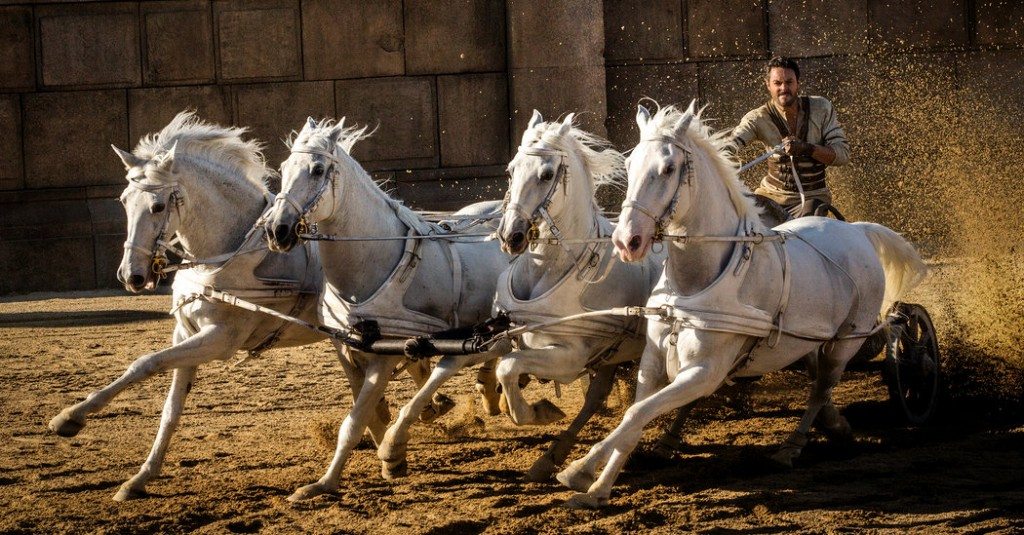 Why? Why did anyone have to remake Ben Hur (1959), one of the greatest films of the fifties and among the greatest epics of all time. Steven Spielberg himself had no interest in doing it because as he stated clearly, “unless I can make it better, why touch it”? Exactly! If a remake cannot make the film better, cannot somehow elevate the story or film from the original then why do it?

Hollywood is famous for remaking movies, and in fact Ben Hur (1959) was a remake of the silent version of 1925. William Wyler directed the picture and it was hailed as a “thinking mans’ epic”, a massive epic with brains. Thoughtfully written, directed and acted, the picture also contains one of the greatest action sequences in movie history, the extraordinary chariot race scene. Ben Hur (1959) won eleven Academy Awards including Best Picture, Best Actor (Charlton Heston) and Best Director en route to becoming one of the cinema’s most astounding achievements. They simply do not make them like this anymore!

Why Timur Bekmambeton made the decision to direct the picture will forever be a mystery to me because, even with the advancements in visual effects today, there is simply no way they can surpass what they accomplished in the fifties. William Wyler, who directed that masterpiece knew how to merge humanity with massive scope, and gave audiences a deeply moving film that moved audiences to tears.

The new film is a huge epic, like the first, and the makers are claiming they did not use computer generated images to create the chariot race, which I believe because it has been done twice before without it. What it lacks is what lies at the core of any great film: heart. Though Charlton Heston was not a great actor, he was a very good one, at home in historical epics because he was larger than life on the big screen. Before portraying Judah Ben-Hur he gave a magnificent performance as Moses in The Ten Commandments (1956), which launched his career and brought the part of Ben Hur to him. Though Jack Huston is a very good actor, part of the famous Huston movie family, he lacks the quality Heston had to give the film heart. To me throughout the film, it felt like a really decent TV movie (and we had one of those in 2011).

And the presence of Morgan Freeman does not help the film. Freeman was among the greatest actors in movies in the nineties, cementing his place in movie history forever with The Shawshank Redemption (1994), but in the years since he has become almost a caricature of himself. Portraying Presidents, God, narrating important documentaries, and recently narrating and hosting a search for God himself on television, Freeman has become perhaps over exposed, and his presence suggests an importance that with this film is not there at all.

The story remains very close to the original, Ben Hur is a prince among his people, a much loved noble man fair to all. Back into his life comes his childhood friend Messala (Toby Kebbel), a Roman now a tribune, who comes to his friend seeking his help. Messala wants Ben Hur to inform on his own people to help him to keep the peace in the area. He makes it clear anyone who opposes will die, and when Ben Hur refuses, they become enemies. When an accident injures a visiting Roman governor, Messala seizes the chance to ruin his friend and has him sent to the galleys for life, banishing any childhood love he once possessed for him. His mother and sister are stripped of their fame and sent to jail where they contract leprosy and are exiled to the valley of the lopers.

Ben Hur slowly works his way back to them, saving his own skin when the ship he is on is rammed and destroyed. Burning with vengeance he meets Iiderim (Freeman) who sponsors promising drivers and horses for the grand chariot race in the circus. Told Messala is the reigning champion and will be racing again, Judah decides to race, welcoming the chance to kill Messala in the race.

And so the chariot race happens, and it is a spectacular sequence. Beautiful, brutal, fast, exciting, just an astounding piece of action cinema, shot and cut to perfection. As good as the first? I am not sure about that because the first was just so remarkable.

Messala dies in the race, but leaves Ben Hur with a terrible secret, leaving the young man to find peace with his life. His encounter with Christ will alter his very existence when he realizes he has met the man before, and realizes this time he is in the presence of the son of God.

Ben Hur has the disadvantage of being made in a time when Biblical epics are just no longer popular, which begs the question: why? Why remake one of the most lauded films in the history of the cinema at a time when such films are no longer made? They are too expensive to make, audiences no longer seem to want them, and they have been done to death.

Charlton Heston was gifted with a muscled physique and granite jaw, an impressive movie hero if there ever was one. We believed he could survive the galleys, we believed he could drive the horses in the chariot race, and we believe he had the strong emotional make up to survive anything thrown at him. He is muscled, solid, powerful.

Jack Huston is not.

Jack Huston is a fine actor, so good as Richard Harrow on Boardwalk Empire during its run on HBO, but he is not larger than life. He is not weak or bad as Judah Ben Hur, but neither does he suggest the depth of the character Heston portrayed in 1959. I did not believe him, not once. He struck me as soft, way too soft to survive what he goes through in the film. As Messala, Toby Kebbel is far too modern in his work as the villain, all glower and arrogance, some of his lines jumping out of the latest Tarantino film. The performances are never bad, understand that, but not right for the film, they just seem to be struggling in a sea of massive scope with little focus given to intimacy. We would almost welcome Huston singing “He Ain’t Heavy, He’s My Brother” while Kebbel spits his words out like they might burn the ground once they hit. They are cartoons, good guy versus the bad guy. Small actors against scope they cannot compete with with.

That scope is often quite something, the massive arena where the chariot race unfolds is a marvel of art direction. The cinematography, sound and editing are all very strong, but again it does not all come together as it should.

The movie will be a failure because it is simply not good enough to find an audience, it might do well the first weekend but then will drop off considerably. There is no sense of awe when he encounters Christ, there is no sense of tragedy when Messala dies, no sense of loss, just a big feeling of empty. And Jesus has much greater presence on this film, whereas in the 1959 version we never saw his face. Here we do, and he is portrayed with a saintly quality I had hoped we had moved past in portrayals of Jesus. He is not a man he is an it, a being, a thing. Christ too leaves one empty.

And that is how the film left me feeling:empty. At the end of the year it might not be the worst film of the last twelve months but it will be easily among the most unnecessary.