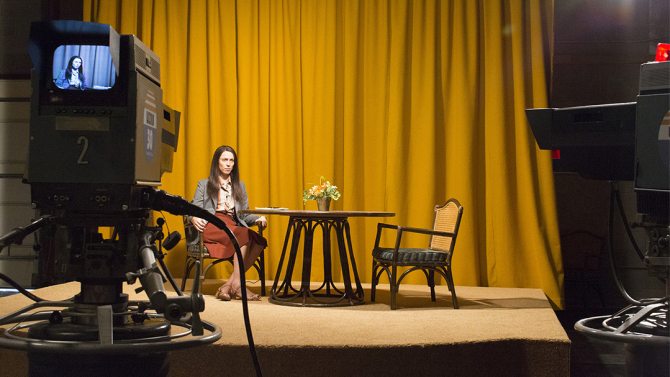 On July 15, 1974 Christine Chubbuck shot and killed herself live on the air making herself the ultimate news story.

This one left me angry and puzzled, angry because no one could see this young woman was obviously mentally ill and struggling deeply with her self-worth, puzzling because she herself lacked the ability to step outside herself and look at her actions. She could watch herself on TV and make decisions as to what she should do differently, or whether or not the flowers were real or artificial but she could not behave in professional manner.

She became paranoid, defensive, petulant and lashed out at her superiors who were in honesty trying to help her, trying to work with her but could not because she made their lives so difficult.

As portrayed by Rebecca Hall in a daring, exceptional performance, Christine is an irritating reporter in Florida at a small TV station where she is to work on puff pieces, feel good things that make people happy. Her choices instead are real investigative pieces that the studio owner has no time for. Her hopes are like those of thousands of other reporters in small markets, to land a job on a national station. With that comes fame, money and prestige, which I am not even sure she was after, I think more than anything she craved attention and respect that just never came at the small studio, though I concede it was easy to see the other side of the coin too. She was a wild card, made scenes, said horrible things that would have gotten most people fired, yet she held on somehow.

Hall is very good as Christine, however maddening she is at times in the throes of yet another meltdown. It displays a depth the actress has not yet shown, but sadly she does not have strong support around her nor a really great script. While they do their best to capture the period with music, it never felt true to the spirit of the seventies. It just did not work for me.