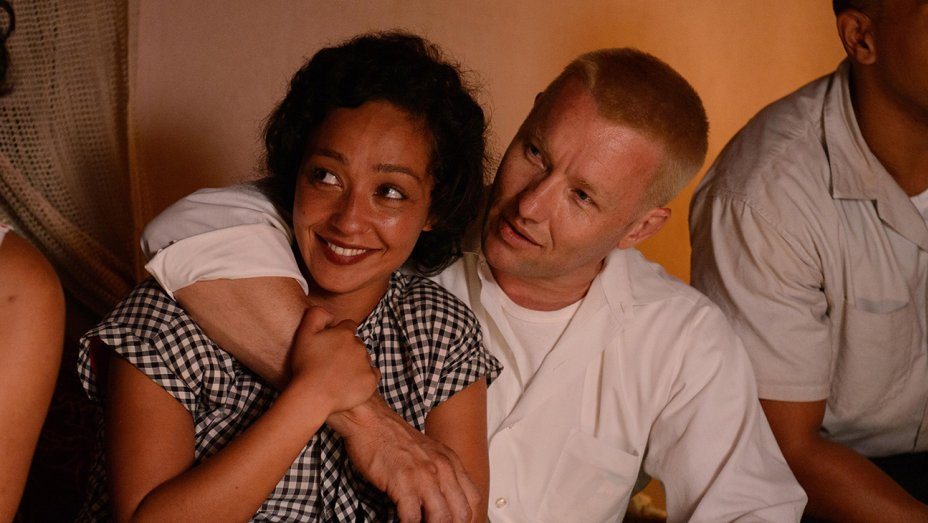 Walking into ‘Loving’, after months of hearing about the film, I expected more I think and that might have impacted my final thoughts on the film. Since its first screenings at Cannes last May, we have been hearing about the picture, and I was thinking this was a sure fire Academy Awards contender, and though it might be that to some, it left me a tad disappointed, as it was not the soaring masterpiece it was said to be.

Based on the true story of the Loving family, a near albino blonde white man, Edward (Joel Edgerton) falls in love with and quietly marries Mildred (Ruth Negga), who he meets in South Carolina. Knowing the risk of inter-racial couples in the American South in 1950, they journey to Washington to marry, and when they return they hope to live their lives in peace and contentment. Not so, as they are instead thrown in jail, before being banished out of the State. Their very lives are often in danger, but they soldier on, deeply in love with one another. When a group of young lawyers fighting for Civil Rights approach them to be a case study in their fight for equality they allow themselves to be swayed by them and agree. What holds them together is not the fact that they have three children, not the fact they get a kick out of breaking the law, but rather because they are two people who are in love with each other and wear it like a fine armor.

The inhabitants of the South for once are not presented as Klan members of fire breathing racists hating blacks with a deep passion, but as people deeply believing their laws and set in their ways. When the couple is exiled to Virginia for nearly a quarter of a century it is a deal they take in exchange for a suspended sentence and to be permitted to be together. That was unique for me given the racists of the South on display in ‘The Birth if a Nation’.

Directed and written by Jeff Nichols, the film is a powerful study of love and what it means to two people, and what it should mean to the rest of us.

Joel Edgerton portrays a man willing to fight for what he believes in but he is such a man of few words I wish he spoke more, I wish he verbalized what he feels. Strong and stoic is one thing, virtually silent in the face of such adversities is quite another.

Ruth Negga, on the other hand, is a revelation in a performance that should land her in the race for Best Actress, which is shaping up to the tightest in many years. Luminous, yet fearful of what can be done to she and her children, and her husband she is nonetheless in love with this man and would walk through the fires of hell to be with him. Her performance is often in her eyes, but beautifully modulated and restrained.

A good film, not the great one I was hoping for.