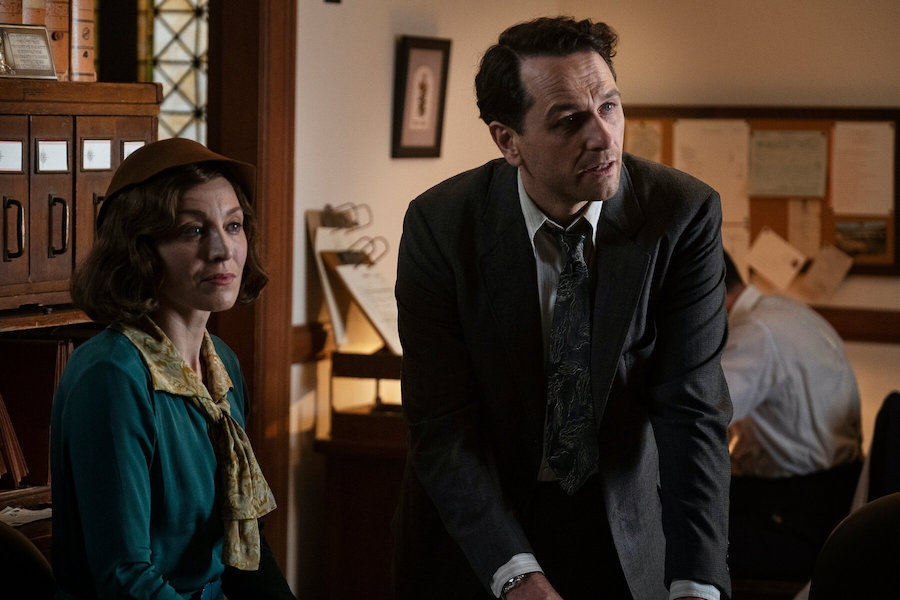 From the moment HBO revealed that they were bringing back Perry Mason to the screen, fans have been waiting for the moment when the criminal defense lawyer comes into court and saves his client through a miraculous discovery of evidence that leads to a dramatic victory. After five weeks of toil and tribulation, the HBO series finally goes into the courtroom with Perry Mason as the trial of Emily Dodson begins. With the ending of the fifth episode, they created anticipation around the moment where he would seize his fate and work his magic in the court. However, as expected, things aren’t so easy for Mason, who is learning to work by the book, when as a PI he didn’t have to think about all the illegal ways in which he would dig into a case.

The trial of Emily Dodson begins with Maynard Barnes giving a two-hour speech about how she had means, motive, and opportunity for the crime. Mason, on the other hand, struggles for the two-minutes that he is allowed to speak in favor of his client. His maiden appearance at court does not spark confidence either in the jury or in his client, who might as well have accepted her fate now.

However, learning from his mistakes, Mason gets better at cross-examining the witnesses and pushing the jury out of their strong beliefs of Emily’s guilt to seeing the case from a neutral perspective. Matthew Dodson, Paul Drake, a hotel owner, Virgil Sheets, and the jail matron are put on the stand. Each of the witnesses creates a new curve in the case. At times, it looks like Mason has it in control, while in the others, he might as well admit defeat.

While the case seems pretty lost in the courtroom, it is on the investigative side that serious strides are made. Della and Pete rise to the occasion and do all they can to uncover relevant information for Mason because they don’t just have to win the case, they also have to solve it. The new information brings the Radiant Assembly back into focus, and it looks like there might be a lot of dirt there, as opposed to what was previously expected.

With only two more episodes left in the season, ‘Perry Mason’ uses its sixth chapter to turn its gears, considerably changing its approach from what it had been in the first five episodes. Now that Mason is a lawyer, he is bound by the law on all counts, and his struggle against these ropes becomes evident through his shaky expressions. But he does evolve pretty fast. From a person who chokes on his first appearance to the one who explodes in front of the judge, calling him out for being in on the cover-up, Mason quickly gains the same confidence in the courtroom, as he was keen to display in his investigative skills on the ground.

This transition makes it all the more exciting to watch, as the show focuses more on the nitty-gritty, the technicalities of fighting a case, and the investigation itself falls into the shadows. We do get to see Della and Pete diving into an insane amount of paperwork as well as chasing the leads across the states, and through them, the show drops important hints in the uncovering of the overarching mystery of the show. We see Della smile as she figures out the connection between a certain Jim Hicks and Herman Baggerly. We find Peter beaming as he discovers that in following the connection between Detective Ennis and the Polacks, he has figured out another player in the game, Elder Seidel. How exactly all of it ties up and how it will save Emily is yet to be seen. However, the show has started to throw in the pieces and the whole picture will come to light by the end of the season.

While Mason’s team is on the spree of digging out secrets, others have revelations of their own. Detective Holcomb realizes that his partner is much more crooked than himself and might as well have been the person to kill little Charlie and sew his eyes shut. But, they are together in this, which is why, despite the betrayal, he is ready to shut up anyone who can point a finger at Ennis. As the villains begin to steady their wobbly knees, another hero prepares to fight on the good side. After the intense tug-of-war that had gripped him for so long, Officer Paul Drake finally decides to not be owned by someone and is ready to do whatever it takes to help Mason save Emily. He knows the dangers involved in his quest, which is why, he sends his wife away to safety, so he can take care of all the bad business without worrying about her.

Amidst all this rigmarole of saving Emily Dodson and finding out who really killed her son, Charlie, Sister Alice is preparing to render the whole case null and void by bringing the child back from the dead. The case against her would be thrown off once Charlie is alive, says Emily, now so sincerely blinded by her faith that she has allowed her child’s body to be dug up for resurrection. Ten more days and we’ll find out what Sister Alice means to do for her miracle.