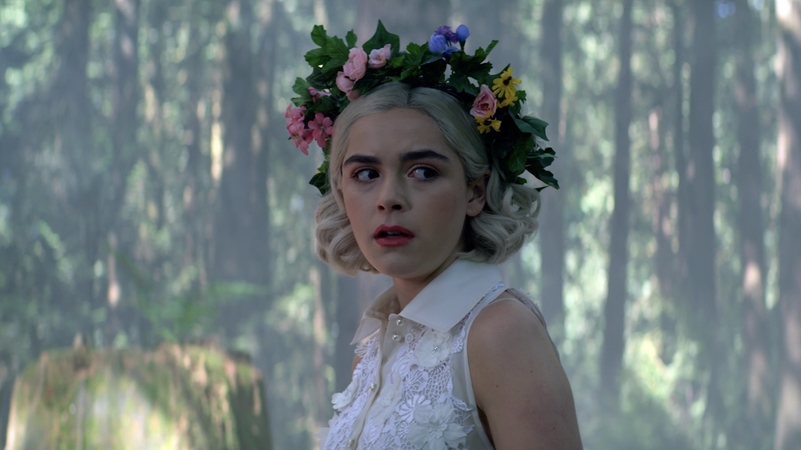 In its fourth episode, ‘The Hare Moon’, ‘The Chilling Adventures of Sabrina’ gives us another ritual from the witch culture, while adding further tension in their world. The Dark Lord is malicious and demanding, and his plans on world domination should not have been allowed to pass. All the witches, or at least, the ones who captured him, agreed on that. However, they forgot that it is the Dark Lord himself who grants them the powers that they used against him. With him not protecting them anymore, they have to face the consequences.

The danger is bubbling up on all sides for Sabrina and her friends. The first problem is the waning powers of the coven. Everyone had started feeling the effects of it in the previous episode. While some witches caught a cold, others were drawn to unintentional suicide. The depleting power is alarming because it would mean absolutely no protection for the witches from the impending dangers. With the Hare Moon festival close by, Hilda comes up with a plan to revitalise the powers of the coven.

Meanwhile, Harvey, Roz and Theo become suspicious of the new carnival in town. They decide to snoop in and find out what is wrong with it, but they are unaware of a snitch close to them. They walk into a trap and Roz has to pay a hefty price for nosing around. The carnival people also meet up with the witches and realise that they are losing their powers. With the promise of the return of the old gods and the fall of Lucifer Morningstar, the pagans issue a dire warning. To survive this problem, the coven has to make a difficult choice, none of which bode well for them.

All this while, Nicholas tries to survive the aftermath of the Dark Lord’s hold on him. Unable to talk about it to anyone, he resorts to drinking and spends time with sex demons to make himself forget the pain, even if temporarily. His anger is directed towards the Dark Lord, whom he pays a visit, in order to let out his fury. But the Satan is nothing if not a trickster who feeds on the vulnerable. Ms Wardwell takes another step closer to solving her mystery.

Reaching the halfway mark of this part, ‘The Chilling Adventures of Sabrina’ has put its characters on the toughest spot yet. Everyone is in a frenzy as they have no idea what they are up against and how to fight, if they have it in them to fight it at all. Their enemies are much more powerful and the gods they worship to are much older than the fallen god of the witches. The fact that their own powers are diminishing by the day doesn’t help their cause either.

Previously, no matter what danger Greendale had faced, the coven had survived it together. Their combined powers had helped them through it all, the powers that they received from the Dark Lord. Them being weak and powerless raises the stakes for the story and opens it up to a new possibility which the audience want to stay around for. The show has always been relentless about throwing one curveball after another, which has not only kept the characters on their toes but has also hooked the audience to it. This time around, they have new challenges in store and if previously there was any room for Sabrina, her friends, and her coven to catch their breath, none of it exists now.

The line between the mortals and the witches is blurring, which means that even if there was any prejudice between them, it should fall apart now. While Sabrina’s mortal friends are mortified by the things that are happening to them, her boyfriend is not doing any better either. His constant agony not only makes him distance himself from Sabrina, but it also makes him question if all this pain really was worth it? Especially when he has Caliban as a potential opponent and Sabrina is the Queen of Hell, to stop which is why he sacrificed himself in the first place.

With so much on Sabrina’s plate, not to forget the ongoing competition with Caliban for the search of ancient relics, the episodes have been flying by. The way ‘The Hare Moon’ ends, there is no reason why anyone should stop watching the teenage witch’s story, which seems to get even darker, and hence more delicious, by the minute.