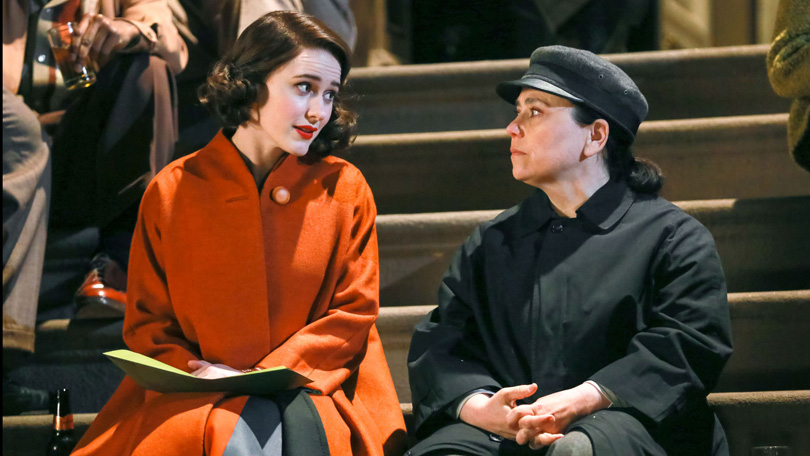 The second episode of the latest season of ‘The Marvelous Mrs. Maisel’ is very aptly titled, “It’s the Sixties, Man!”, as it, in many ways, serves as a commentary on the changing America of the time. The episode becomes a rather interesting one as it explores subjects like communism, revolution, race and gender biases, like no other episode of the show has previously. The lines spoken by Ezra and Alan, Abe’s new so-called “communist” friends that are introduced in the episode, sum up what it tries to do, also giving the episode its title:

“There is no point being subtle. It’s the sixties, man!”

The second episode of the show digs deeper into the conflicts that were initiated in the previous episode, primarily focusing on the complications that arise in Midge ( Rachel Brosnahan) and Susie’s (Alex Borstein) relationship, after Susie decides to work as Sophie Lennon’s manager, who Midge despises for obvious reasons.  Will things get better between the two or will they drift further apart? Let’s find out.

The episode opens with Midge delivering a weak comic act at Gaslight where she hardly gets any laughs, and looks visibly distracted because of what she recently learned. She goes on to speak about loyalty to take a dig at Susie because of her decision to work with Sophie. But Susie has her own financial issues to tackle. There is a growing distance between the two as Midge actively tries to avoid Susie, which is shown over several scenes in the episode.

On reaching home, Midge encounters her father, Abe, partying with a bunch of young communists at their living room. After Abe’s arrest, he wishes to be the new face of free speech. Midge then learns about her father’s arrest. Abe’s newfound communist friends offer great comic relief in the episode, as it takes a dig at their phoniness. In fact, it makes fun of their proletariat values with, wait for it, Zelda’s butter cookies. Some of the episode’s most hilarious moments are offered by Zelda, the housemaid, and her interactions with Abe and these youngsters. The situation, eventually grows out of hand, with Abe unable to control the metaphorical monster he created, and his house becomes a communist shelter.

Meanwhile, Rose leaves for Providence to meet her family in hopes of getting more money from her trust fund, so that she does not have to compromise financially. The scenes that follow become crucial as they show Rose in a completely new light. A board meeting is arranged by her brother Oscar to discuss the trust fund. The meeting becomes a highlight as it sheds light to the strong gender bias in her family. The men are condescending and awful to her, asking her to sit separately, not allowing her to speak, and eventually asking her to leave the room. With a bold move and a strong monologue, Rose takes a stand for herself and gives up her trust fund entirely.

On the other hand, Joel and Midge’s divorce ultimately gets finalized but only after the judge tries to convince them otherwise. The scene sheds light on the gender biases in the institution of family, and has Midge ultimately proclaiming that she cannot be a wife at the moment. Joel is also trying learn more about the club he bought, and finally meets the owners through Mei, who works for them, and learns about their motives.

The episode also introduces Reggie as Shy’s intimidating and no-nonsense manager as he interacts with Susie at Shy’s party at Harlem. With Midge avoiding her, Susie feels alone and rejected at the party. But Midge finally finds her, and the episode ends at heartwarming moment where two share an intimate conversation and make up.

The second episode of the latest season of ‘The Marvelous Mrs. Maisel’ is not as fast-paced as the first one. Neither does it feel like a sweet sugar rush. But that’s not a bad thing at all. The second episode is just as relevant as the previous episode, and perhaps even more. This is because of the subject matter it chooses to discuss and the heartwarming way through which it does so. The episode is exceedingly sharp and witty, and makes use of humour not only through its brilliant dialogues, but also in silences. It also becomes crucial as it makes the viewers and the characters realize how much Midge and Susie value their friendship.

Its the kind of episode that allows character development and growth for each one of its characters, as they shine in their own special ways. With Abe and his interest in revolution, with Rose fighting for her rights and self-respect, with Joel offering support to his wife as she divorces him and builds her career, with Susie realizing how much her friendship with Midge matters to her, and with Midge realizing her own selfishness and choosing to encourage her friend. It has one appreciating and rooting for each one of the characters. But in my opinion, Rose definitely steals the show with this one.