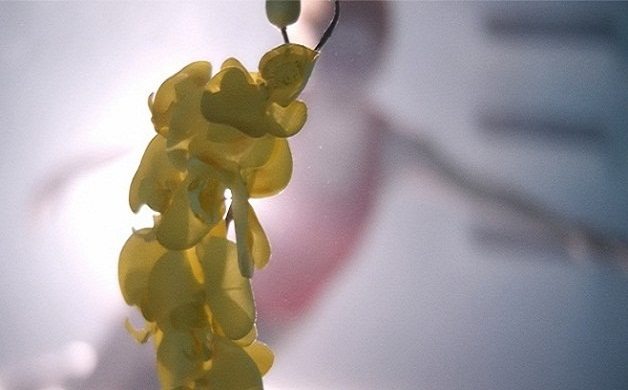 If ever the art of cinema required a reason or a proof to corroborate that its purpose of existence is much more than mere entertainment, then you should leave everything else and watch the compellingly enigmatic and mythical, Upstream Color. And the creator [note that I use the word creator and not director] of this masterpiece in the making is a former software engineer and a mathematician, Shane Carruth. Words like multi-talented, adroit, ingenious seem insignificantly tiny in front of him. How can you describe someone who’s the director, writer, cinematographer, editor, music composer, producer and distributor of the same movie ? May be super-human. And did I say he also plays the male lead in the film ? With Upstream Color he has made a film so surreally complex, both narratively and thematically, that Christopher Nolan’s movies will seem fairly straightforward in contrast.

Lyrical, mystifying and at the same time deeply philosophical, Upstream Color is as much a technical wizardry as it is a meditative and contemplative piece of art. It’s a rare cinematic commodity which will resonate long after the credits have rolled, it will spark debate and inspire conversations for years to come even if it doesn’t set the cash registers at the box office ringing.  But more importantly, it will inspire individuals to push the boundaries of imagination and creativity. Or atleast I hope so.So, what is Upstream Color about. It’s next to impossible to synopsize the film, but on a broader perspective it explores the symbiotic relationship between man, animal and nature through personal journey of two individuals to self discovery after they have been stripped off everything they know and posses. Narratively, it’s not as elliptical as Primer but metaphorically it’s more dense with multitude of ideas about humans, relationships, and society at large, circling around. Infact, while Primer was purely scientific in nature, this one is less scientific and more philosophical.

The story follows Kris (Amy Seimetz) who is leading a normal life when she is kidnapped by a Theif who forces her to ingest a parasitic maggot that allows him to hypnotize and control her, ultimately stealing everything she has. Days later she wakes up disoriented while maggot inside her has grown into a worm-like entity horrifically coursing through her body. Unsure of what’s happened and after failing to remove the worm from inside, she is drawn to The Sampler who ultimately performs surgery to transfer the worm from her body to a pig. No longer physically infected but still influenced by forces [the psychic bond with the pig] she doesn’t understand, Kris encounters Jeff (Shane Carruth), a man similarly broken, and together they struggle to reassemble their lives and make some sense of what has happened to them. Ultimately how Kris and Jeff rediscover themselves, and what are the repercussions of it, is what you will get to see in the film. Having said that, to be honest, I believe any effort to simplify the story is actually belittling the larger ideas and themes that the film covers.

Metamorphically, Upstream Color is multi-layered, but primarily it’s about the things that are outside and beyond our control. It is evidently obvious to most of us that not everything occurring in our lives has a reason or is under our control. Infact the title of the film itself is symbolic. We may be able to force the shape of our story, but the color, the details that may define its richness are decided by forces outside our reach. Likewise, in the film the two central characters are caught up in mythical cycle which they are not aware of. The three points of this continuing cycle’s triangle are a Thief, a Sampler and Orchid Gatherers. Each of them directly or indirectly affect and influence the lives of Kris and Jeff and ultimately, how they also unknowingly share a bond with the pigs and nature, is what the film tends to figuratively delve into.

Undeniably the film never ceases to be surreally charming due to it’s underlying deep philosophical tone but what lends even more hypnotic, mesmerizing quality to Upstream Color is its technical brilliance. Be it the close-up shots with light fading/brightening in the background or the images of colorful fluidic movements; everything adds up to an exceptional cinematography and impart a dream-like feel to the movie. Visually one may notice similarities to Malick’s films but tonely it’s closer to Lynch’s style of film-making. Another ingenious aspect of the film is the Sound and the Original Score which chances are, you won’t have ever heard anything like it before, yet that won’t stop you from swooning over it. The music in its own right is worth more than a listen but here it helps in building the enchantingly hypnotic aura around the scenes in the film.  And Upstream Color, won’t have been the film it is, without the innovative cuts and edits, which again only helps in making it beautifully enigmatic.

Amy Seimetz, the female lead is the focus of the story and she does an incredible job holding the fort together when everything around her character is going crazy. Shane Carruth, inspite of multi-multitasking never lets his guards down as an actor and is respectably good. There is hardly any dialogues for the actors, infact there are none in the last 20 minutes of the film. Carruth undoubtedly is a visual film-maker, and he cleverly keeps the conversations to bare minimum without feeling the need to explain everything to audience as he lets them make their own interpretations.

Thematically rich and layered, Upstream Color is a ultimately a twisted examination of love and relationships – how do we function in it, what our love does to one another, and eventually how that’s connected to the nature and bigger schemes of things. However hard it might be for you to believe but it’s more of a romance than science-fiction. I hope to unravel more of its carefully constructed mysteries in much-anticipated future viewings. Till then it will remain in my mind as the best film of the year.