When a television show consistently manages to outsmart even the most ardent viewers, one cannot help but try to spot some form of symbolism or saving grace in a not-so-great episode. Unfortunately, that is what ‘Rick and Morty’ fans will be busy doing after the second episode of its much-awaited fourth season.

To begin with, last week’s episode craftily did away with the burden of fan expectations due to its extremely meta premise. It was perhaps one of the show’s best episodes. Resultantly, in hindsight, one could now say that last night’s episode had set itself up for disappointment. So…was ‘The Old Man and the Seat’ some form of proof by the show’s creators of our ridiculously high expectations? Or, was the previous episode a warm-up for tonight’s “shit-show?” After lots of thought, we reckon that it was just a watchable episode, nothing special.

To be fair, the writers had some pretty neat, if not ingenious concepts for this one: A dating app that needs to be stopped, a lonely Rick’s attempt at friendship and a fly running a frog bar. Admittedly, none of these ideas are as inventive as some of the show’s more refined, or even average stories. But more glaringly, the plotting of this episode felt extremely lazy. And we will have to give its creators credit for that, since they did break our expectations in that regard. The generally fast-paced Adult Swim show rarely gives the impression that nothing is happening. 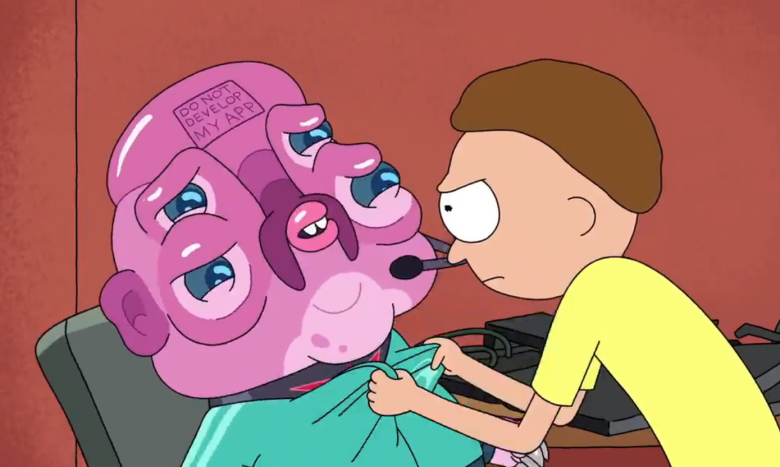 The episode begins at the Smith family dinner table with Rick introducing his extra-terrestrial intern, Glootie. Glootie keeps trying to entice the family to hear his idea for an app, but Rick warns them to not give heed to his requests, going as far as spelling the warning out on the alien’s head. Then, the aged scientist announces his departure for a solo adventure, which is quickly revealed by Summer to be his alone, pooping time.

Unsurprisingly, Jerry gives in to Glootie’s proposal and together, they develop and release a dating app called “Lovefinderrzz.” Upon finding this out, Morty tries to make Glootie roll back the app, fearing a catastrophic situation due to Rick’s warning. However, Glootie tells the father-son duo that they must go to the location of the app’s server at his mothership to stop it. Rick and Jerry proceed to the mothership to stop the app in what Jerry excitedly thinks, is a Jerry and Morty adventure.

At the mothership, the chief of Glootie’s species announces his plans to Jerry and Morty. The aliens are known as “Monogatrons” and have perfected the art of romance. They look down on humans’ idea of relationships which the chief claims, is driven by scarcity. He plans on stealing Earth’s water by distracting the entire population with the dating app.

Summer is seen using Lovefinderrzz, much to the chagrin of her mother. Through her eyes, we get to see the Monogatrons’ plan in action. She keeps matching with different “soul mates” and running away from her mother with them before she finds another one. Around her, others are comically shown doing the same thing. Most memorably, a couple persistently neglects their baby at a restaurant to go on dates with other people.

Elsewhere, Rick is shown peacefully taking a dump on another planet with a pristine landscape. This seems to be his getaway: a place he regularly returns to, in order to be left alone. However. when he finds out that someone else has been using his commode, he goes on a search mission to find and kill the privacy invader. After some effort, which involves a showdown with a fly gangster who runs a frog bar, Rick manages to find the alien that has been using his toilet. Seeing his suicidal and depressed life, Rick decides to let him live as a form of punishment. However, when Rick finds him using his toilet again, he is angered and kills him. Later, he realizes his loneliness as he mulls over the lost opportunity of connecting with someone and making a friend.

On the other hand, Jerry and Morty manage to stop the app from destroying the planet according to the Monogatrons’ plan with a rather easy fight-back. The app is turned into a paid service that leads to everyone deleting immediately, thereby resolving the issue. 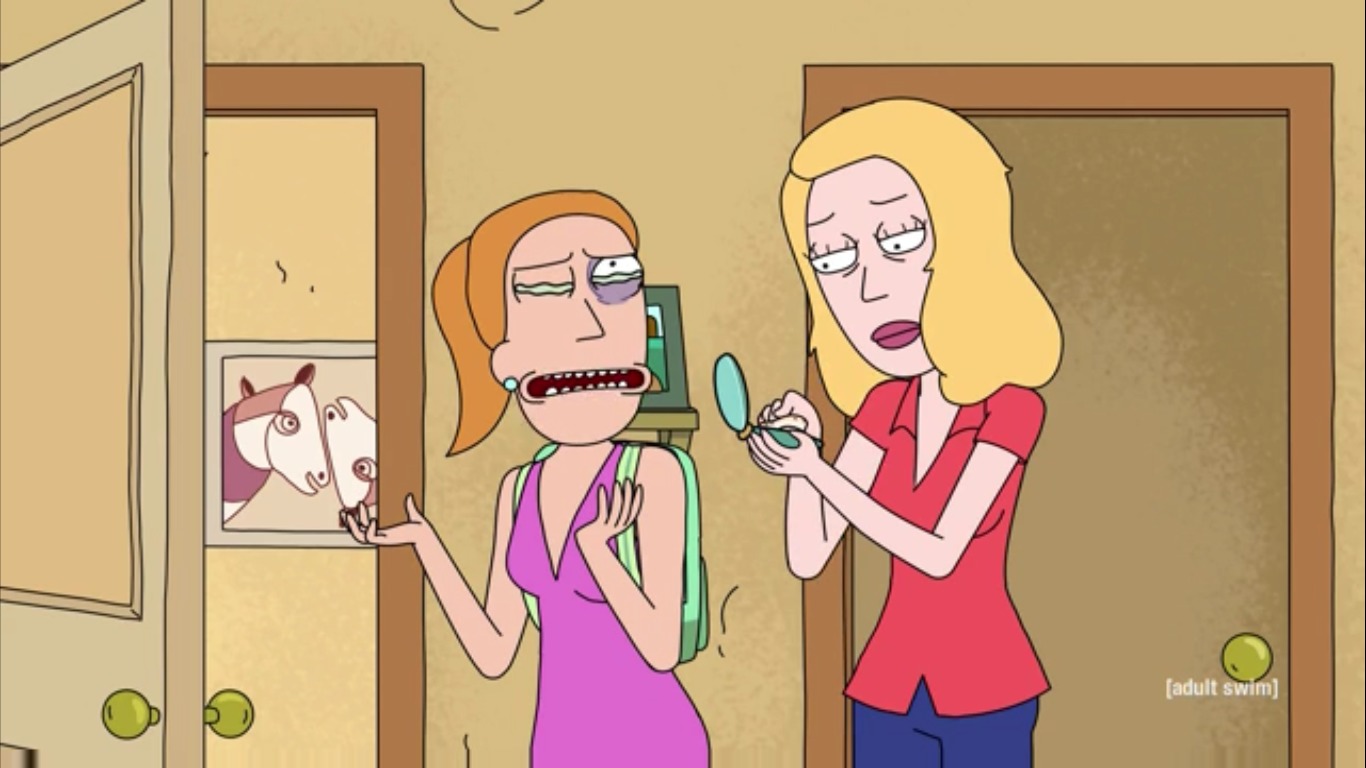 Firstly, the show’s attempt to mirror and comment upon society is commendable but unoriginal. It feels like an indolent attempt. The “dystopification” of dating apps is done and dusted. In fact, the show’s attempt at making witty, critical remarks feel outdated.

For instance, the Monogatron chief’s proclamation that love on earth is defined by scarcity does not remotely ring true in the age of Tinder. While it may have been an ironic reflection, it does not deliver the intended impact. The topic of monogamy in millennial times has been done and dusted, in significantly more compelling ways. For starters, just go watch Black Mirror season four’s fourth episode, ‘Hang the DJ.’ It provides a much more expository look at the topic.

On the other hand, Rick’s quest at beating loneliness does not feel anything out the ordinary either. That aspect of the character has already been explored by the show, in a much more fruitful manner. Just recall the third episode of the second season, where Rick tries to commit suicide in what was one of the most heart-breaking and jaw-dropping moments in the history of television. The smartest thing about this attempt was the episode’s title which pays tribute to Ernest Hemingway’s acclaimed novel about an old man on a solo, fishing adventure.

One might even forgive ‘Rick and Morty’ for not being the most creative endeavor out there despite its reputation to be exactly that. But what cannot be forgiven is the lack of a coherent plot. The story proves to be rather predictable and does not manage to be reflective or humorous on its own.

The only thing that makes you laugh are the few witty remarks which aren’t allowed to be excellent ones due to the plot’s lack of originality. Some moments like Beth’s acceptance of being an overprotective mother and her willingness to break out of prison to mother Summer if she had to, keep the episode watchable. You won’t get bored by it for sure. But season 4, episode 2 won’t make you laugh your guts out or evaluate life and society in the same manner as some of the show’s best (or even average) episodes.