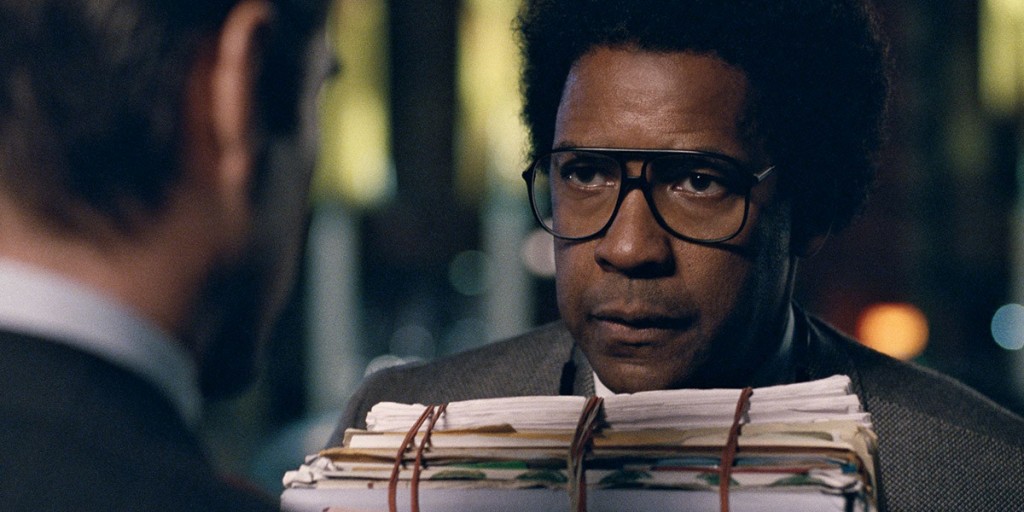 We have never seen Denzel Washington as he in, as Roman J Israel, Esq. his new film that screened here at TIFF as a late announcement. The actor, one of the finest in movies, stretches himself further than he ever has before, easing brilliantly into the part of a high functioning man with Aspergers, a brilliant lawyer savant who is not presentable to clients, but handles the research and legal work behind the scenes.

With a towering Afro, a three piece suit from three different suits, old seventies glasses, he looks like a person of the street, until he speaks and then the intelligence, and the issues are clear. It is a stunning transformation because the actor has never broke this far from himself in turns of appearance. Gone is the trademark toothy grin, whether flashed in anger or joy, replaced by a somber man who rarely meets the eyes of the person he is speaking with and can recite reams of law. He falls far deeper into character than say, Dustin Hoffman in Rain Man (1988), and is less affected than Hoffman. Despite the fact, initially, we know it is Washington, we lose him, he becomes Roman. Or rather he becomes as he announces, “Roman Israel, Esquire.”

Directed and written by Dan Gilroy, the script offers the actor one of the most challenging roles he has ever portrayed, and a true artist, he meets that challenge, soaring with a masterful performance.

Remember how truly devastated he was upon losing the Oscar last year in a Fences (2016)? No need, he will be back this year and I believe he will win. It is a mesmerizing performance from one of our greatest actors who proves he still can astonish us. We have seen truly brilliant work from him, Cry Freedom (1987), Glory (1989), his astounding Malcolm X (1992), Philadelphia (1993), The Hurricane (1999), Training Day (2001), Flight (2012) and last year, Fences (2016) but we have seen anything from the actor like this transformation.

Forced to find other work when his boss suddenly dies, he is left working for a legal shark portrayed by the ever surprising Colin Farrell, having one of those dream years where he is everywhere, and good. What his new boss does not count is Israel and his ferocious commitment to the greater good, to Lost causes, to his connection to what he believed in at the beginning. A fighter for those who cannot fight for themselves, he is unique, a lawyer who believes in the law and his clients.

Colin Farrell does very good work as the official courtroom lawyer at the firm, but make no mistake, he too knows the brains behind him belong to his curious colleague.

Washington is astonishing in the film, and the director needed him to be because the film is not in the same league as his performance. It is good, but no more, while Washington is remarkable. I have always believed his finest work was in Malcolm X (1992) in which he gave a performance for the ages in a film for the ages, but this is by far his most daring work. Walking a high wire act, at a time when most actors have forgotten to be daring, he is nothing less than astonishing. Move over Gary Oldman… Denzel is in the house.