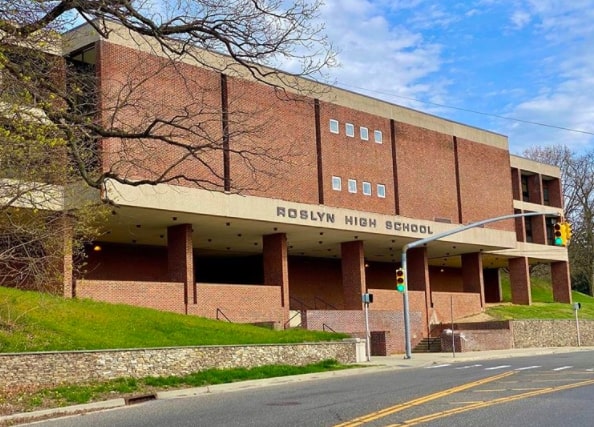 ‘Bad Education’ directed by Cory Finley digs into the root of a public school embezzlement case that was the top talk of media in 2004. Through humor, the film takes its audience through a carefully sketched character of Frank Tassone (Hugh Jackman), who is based on the real Frank Tassone, the former superintendent of Roslyn High School.

As the details of the issue came out, the Roslyn community, along with the rest of the country, came to know that Frank Tassone and assistant superintendent, Pamela Gluckin were using money from the school funds to lead a lavish life. Soon the trial followed, and the rest as we know it, is history.  In the aftermath of the movie and an inquiry of the real events it was borrowed from, one cannot help but wonder about the school in which it all unraveled.

Absolutely! Roslyn High School, in Roslyn Heights, New York, is indeed a real school that was witness to this scam. The school’s reputation for having top scorers is also not far from the truth. The school even has a bit of unique history to it.

The school was built on the property of Harbor Hill donated by the Mackay family in the 1920s. The famous duo, Clarence, and Katherine were quite the prominent figures back then. Clarence Mackay was the head of the Mackay Radio and Telegraph Company, whereas Katherine was a suffragist, was the founder of the Equal Franchise Society. The original school building came into existence in 1925. In the early 1970s, however, the building was destroyed by a wrecking ball. In the aftermath of this, the school was re-built in Brutalist architecture.

One of the notable structures that stands out is the 9/11 Memorial, which was built to honor Roslyn’s students who fell victim to the 9/11 attacks.

True To the Roslyn High As We Know It

The Roslyn High School falls within the Roslyn Public Schools. Though much of its academic merit is talked about in relation to Frank Tassone’s presence, it is vital to understand that the school is doing equally well, even today. In 2014, much after the incident, there was a report on how Roslyn High’s students bagged incredible scores on PISA (Program for International Student Assessment) that put them in the first place against every other school in the country.

Its present and graduate students only seem to have nice things to say about the school’s education and general environment. After all, Mike Makowsky, a former Roslyn student, is the one who went out to write the screenplay of ‘Bad Education.’