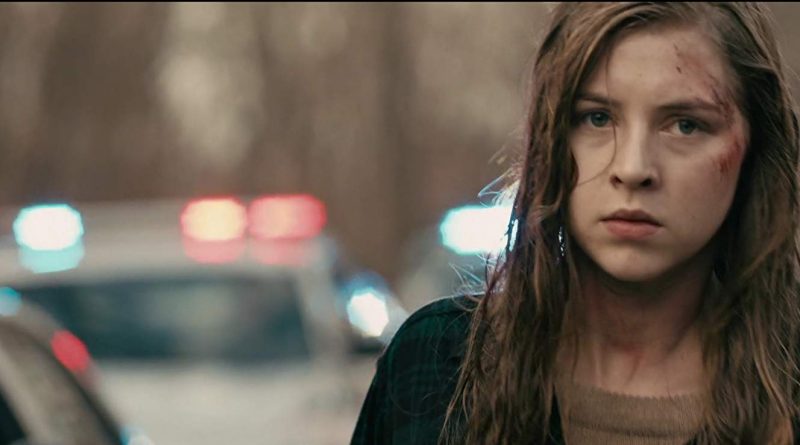 ‘Rust Creek’ is a thriller film that quintessentially centers around the moment a young individual realizes the fragility of her own mortality. This tale of survival, unexpected friendship, and loyalty features some rather commanding performances by Hermione Corfield, Jay Paulson, Sean O’Bryan, Micah Hauptman, and Daniel R. Hill. Let’s unpack what the ending is all about together, shall we? SPOILERS AHEAD.

Sawyer Scott is a senior at Centre College and has a job interview the day before Thanksgiving in Washington, DC. Excited but nervous, she does not inform her family and loved ones about her plans. On her way, she learns that the traffic on I-64 is horrendous, and so she takes a detour. However, the road is closed, and the GPS also stops working. Two known local troublemakers – siblings Hollister and Buck – are burying a body in the area and think that Sawyer has spotted them. This is not the case, and she turns around to leave.

Sawyer also makes use of a paper map to find her way back to the highway. This is when the brothers pull up next to her. Under the guise of helping her, they invite her back for dinner at their place. However, she doesn’t trust them, and an altercation ensues. Buck manages to stab her in the thigh, yet she successfully escapes into the woods. With no resources at her disposal, Sawyer passes out and is found by Lowell, the duo’s cousin, who cooks meth. They develop an unlikely friendship, but will she be able to make it out of the woods in one piece?

Hollister and Buck come back to the trailer to find that Lowell has been harboring Sawyer under his roof all this time. He manages to calm his cousins down while telling the girl to microwave some coffee. Lowell explains that he has trained her, and even instructs her to come and sit on his lap. However, the “coffee” cup actually contains anhydrous ammonia, which leads to an explosion. Lowell is able to protect Sawyer from being afflicted. He tells her that she will be fine alone.

Buck does not survive the explosion, whereas Hollister is badly burnt. Although he shoots at the girl, his cousin takes him down. This is when Sheriff O’Doyle shows up and kills both Lowell and Hollister. Eventually, even though Sawyer makes it out of the forest, the Sheriff catches up with her. She finds it weird that he hasn’t called in for backup and other resources.

Sheriff O’Doyle tells Sawyer not to worry and affirms that in this situation, he is the Chief, and she is an Indian. He then stops the car and takes her back to the lake inside the woods so that he can drown her. However, Sawyer stabs him with a weeding fork that she had taken from Lowell’s place earlier. As she makes it back to the road, the vehicles of State Police are seen entering.

At first glance, it seems as though the movie is actually just about Sawyer making it out alive. However, if you take a closer look, you will realize that both Lowell and Sheriff O’Doyle also do things solely to ensure their survival. Before we launch the discussion, think of the narratives that accompany the three characters as distinct streams of water. Now, imagine that as the story progresses, they all merge, and by the end, it is Sawyer’s tale that becomes the dominant one in the confluence.

Lowell, by societal standards, would not be regarded as a good person. He has been cooking meth since 14 and is even producing the drug for the scummy operation run by the corrupt Sheriff and his own cousins. But he really is kind-hearted. After all, he did not have any reason to help Sawyer in the first place. Furthermore, making meth is the only thing that he has known his whole life! He may not be a hero, but he is also not the bad guy.

Then there’s the Sheriff, who belongs to a respectable profession and would be hailed as a hero in the eyes of society. However, he is corrupt and wants to “show the Mexicans” that they can also run an effective drug operation. Although tasked with the safety and security of his people, O’Doyle kills Deputy Katz when the junior officer overhears a conversation that incriminates the Sheriff. Apart from this, O’Doyle also kills Hollister and Lowell, who, at the end of the day, were still an essential part of his operation.

Lastly, the Sheriff just needs to be a part of the force till his retirement. If his sins were to see the light of day anytime before that, then his entire life would be at stake. In ‘Rust Creek,’ Sawyer is definitely the protagonist, and her struggles are well highlighted. However, the story would be incomplete if you don’t consider that the two men are doing what they deem necessary for their own survival. 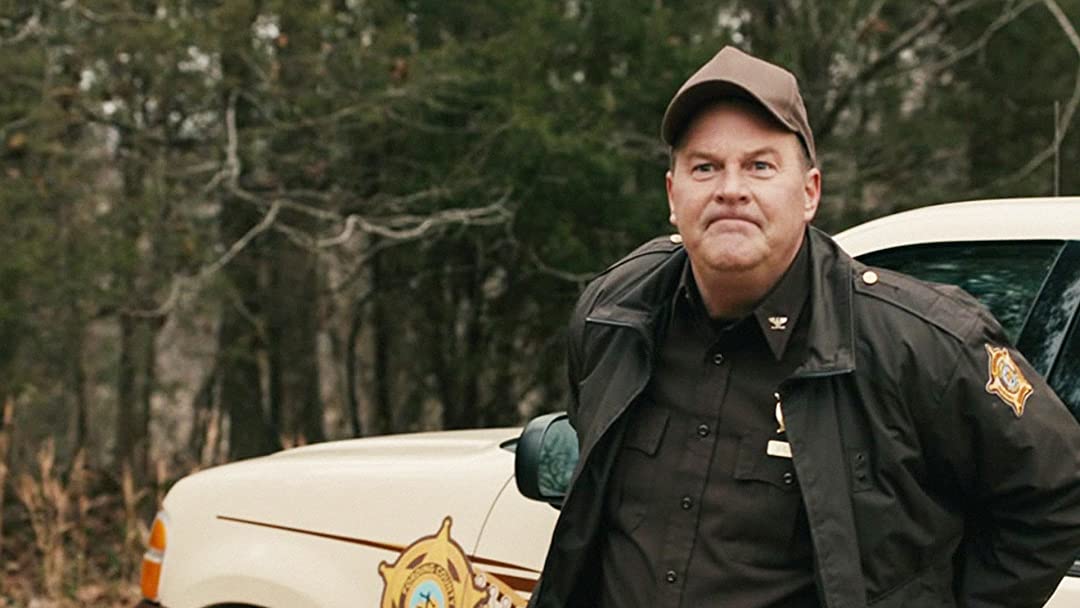 In fact, we’d argue that even though they did not survive in the end, they are the very reason that Sawyer did. Despite being in the meth business, Lowell wants to leave the small town and turn a new leaf. He even plans to do so until he crosses paths with the Sheriff on that fateful day. But while he may not have been able to escape his fate, it’s almost as if his hope and faith carry Sawyer to safety. In the end, it is also the tool taken from Lowell’s trailer that helps Sawyer escape the Sheriff’s attacks.

When you juxtapose the annals of Lowell and O’Doyle, there is this ironic synergy that fuels the plot. While the former gives Sawyer shelter and company till it is safe for her to leave, the latter triggers her fight or flight instinct one final time. After all, he simply cares about his retirement and would not have hesitated in killing her as well. So while the two men perish, in their own unique way, they end up ensuring Sawyer’s safety, even if it is unintentional.

An impressive facet of Sawyer’s tenacity is the fact that she has absolutely no technology at her disposal. She gets into the mess in the first place because the GPS guides her to a closed road, which is where the brothers are burying the body. Then, the altercation occurs after she has stepped out of her car to read a paper map. Sawyer’s quick wit makes her run into the forest, where she is able to protect herself from Hollister and Buck. 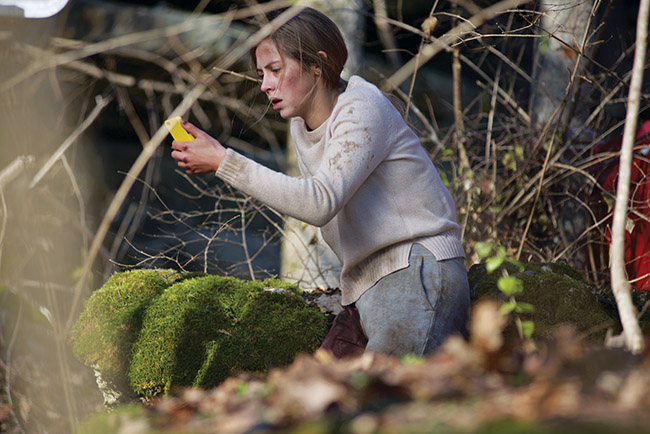 Unfortunately, due to fatigue, she passes out, which is when Lowell spots her and takes her back to the trailer. Since she is a chemistry major, she makes use of lye to cut through the ropes. There are many such instances throughout the movie, where she has absolutely no technology to aid her. Naturally, while watching the movie, we couldn’t help but place ourselves in her shoes. If we were Sawyer, we aren’t too sure that we would have been able to strive in the same manner. With no car, no phone, and two men scouring the forest, survival becomes a mammoth task.

Plus, this only made us realize how dependent we are on technology in our daily lives today. However, the good thing is that on the official website of ‘Rust Creek,’ there is a survival guide that details the steps that Sawyer takes to fend herself from the attackers and ensure her survival. (You don’t have to be stuck in the Appalachian trail to make use of these techniques either). They also have many resources listed in case a viewer wants to learn more about self-defense moves and classes. So, if you’re left feeling a morbid sense of doom, then don’t worry, because you can refer to these resources at your convenience.