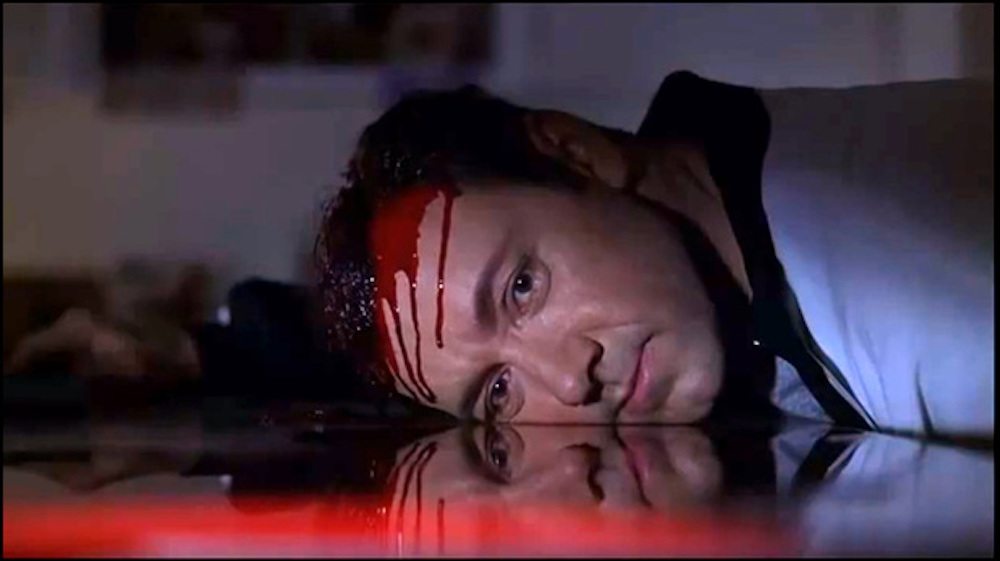 Death scenes in movies are difficult to pull off. First of all, as a storyteller you know that you have a great responsibility. Any insensitivity can lead to devastating results on how audiences perceive the whole film. Therefore, it is important that death scenes are done right. Here is the list of top 10 death scenes in movies — some of them are sad, while others not so much. Warning: Spoilers Ahead 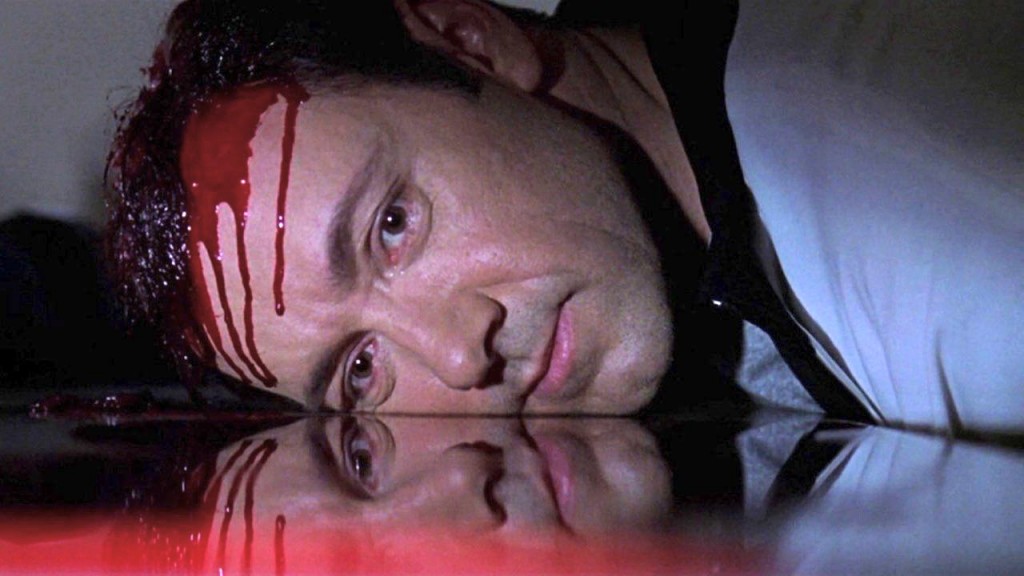 Director Sam Mendes’ Best picture winner film ( my all time favourite) opened with narration of Lester Burnham ( Kevin Spacey) who suffers from mid-life crisis revealing: “In less than a year, I will be dead. ”The film’s ending was a shock when the death actually played out ( who kills the narrator?). The film’s final lines, during which a pair of gunshots sounded in Burnham kitchen. He describes some of the meaningful experiences of life with the montage of images from past life and despite his death, he expressed his feelings of ” gratitude for every single moment of my stupid little life”. Lester gets shot in the back of the head as he wistfully at a family photograph in the kitchen( reacting :”Man, oh man”). The gun slowly appeared on the right side of the frame and the white tiled kitchen wall to the left of the frame was splattered with blood and brains, sailing in the air over a vase of red roses after the gunshot. The identity of the killer also shocks the viewer. One can make a guess that Lester could have been killed by his wife (played by Anette Bening) but in the end it is revealed that the killer was Col. Fitts ( Chris Cooper). Kevin Spacey surely deserved and won Oscar for his wonderful performance.

2. Jame Gumb in ‘The Silence of the Lambs’ 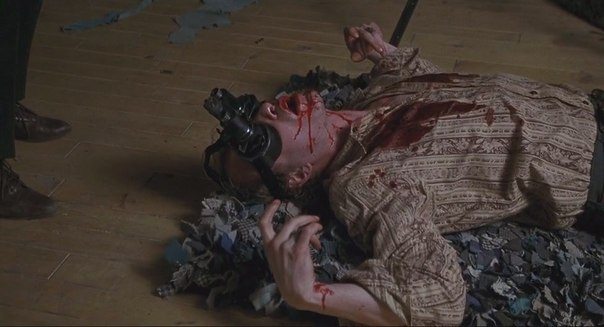 In the film’s climactic scene, FBI agent Clarice ( Jodie Foster) pursues serial killer Jamie Gumb ( Ted Levine) inside the suspect’s house . He evades and disappears into the cellar. During a terrifying chase sequence in the dungeon like hideaway, she cautiously follows the killer down the stairwell into the cellar. The skinning room sequence where big moths flew overhead terrifies the shit out. As the serial killer(wearing night vision goggles) tries to kill her with gun, its loud metallic tick tips off Clarice his location and she fires flaming shots at point-blank range. Gumb gurgles blood from throat and dies. It is one of the most terrifying death sequence in a Hollywood movie.

Quentin Tarantino’s most popular and influential and cult film is about a code named gang that executes a simple jewellery heist. It is notable for a prolonged and realistic death scene of Mr. Orange ( Tim Roth) as he painfully bleeds to death from bullet in the stomach. When the robbery goes horribly wrong , Orange suffers from gut shot. Eventually, Orange reveals himself to be a snitch from LAPD. After a Mexican stand-off, that finishes off most of the members of heist group , he’s killed by the surviving Mr. White ( Harvey Keitel). 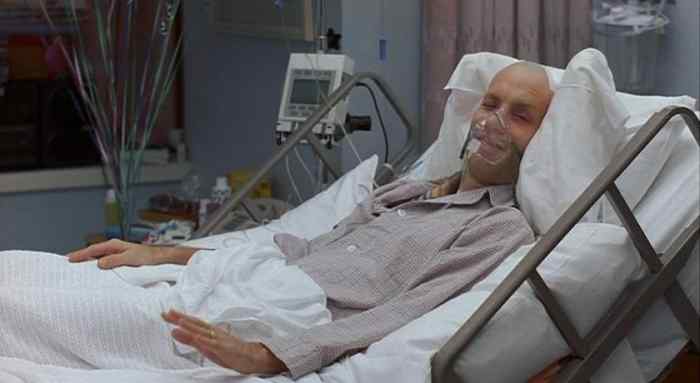 This movie from Jonathan Demme was one of the first realistic, big budget mainstream Hollywood treatments of AIDS, garnering Oscar for Tom Hanks for Best Actor. In the film’s final hospital scene, dying AIDS patient Andrew Beckett ( Tom Hanks) is with long time male lover Miguel Alvarez( Antonio Banderas). Family and friends bid him goodbye . Alone, he dims the lights and removes his oxygen mask. It was quite an emotional affair.

5. Prisoner Brooks in ‘The Shawshank Redemption’ 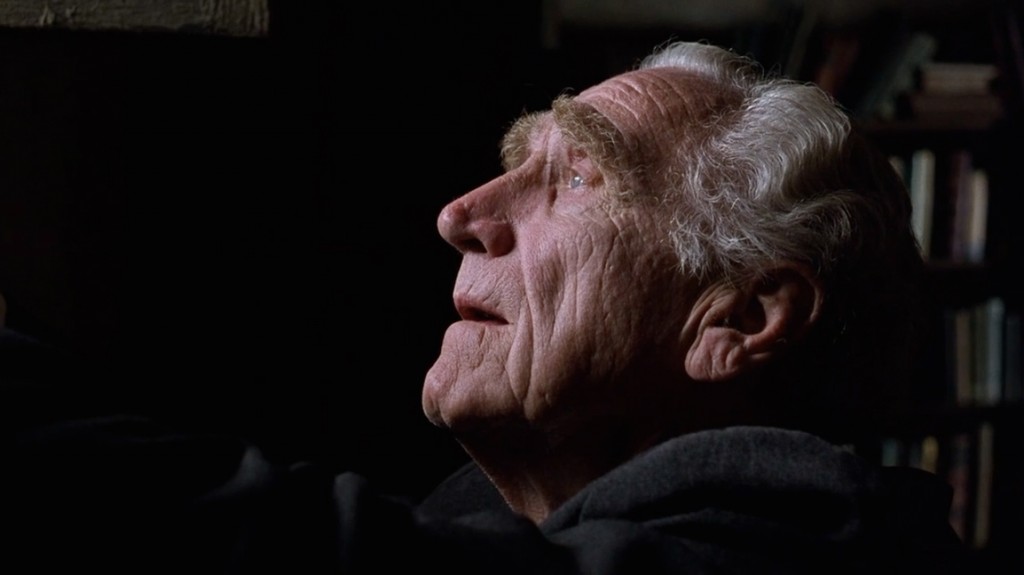 Frank Darabont’s drama film about prison life became an amazing cult film favourite after its release on video. Elderly prisoner Brooks ( James Whitmore), now released to life on the outside after fifty years in the Shawshank institution, despairs once he enters the frightening outside world. He takes the job of a grocery bagger and lives in a house called Brewer. Lonely, afraid, melancholic and disoriented , he decides to end his life. He climbs up onto the chair and then onto a table , carves a message “ BROOKS WAS HERE” . He kicks out the table and hangs himself from ceiling beam. 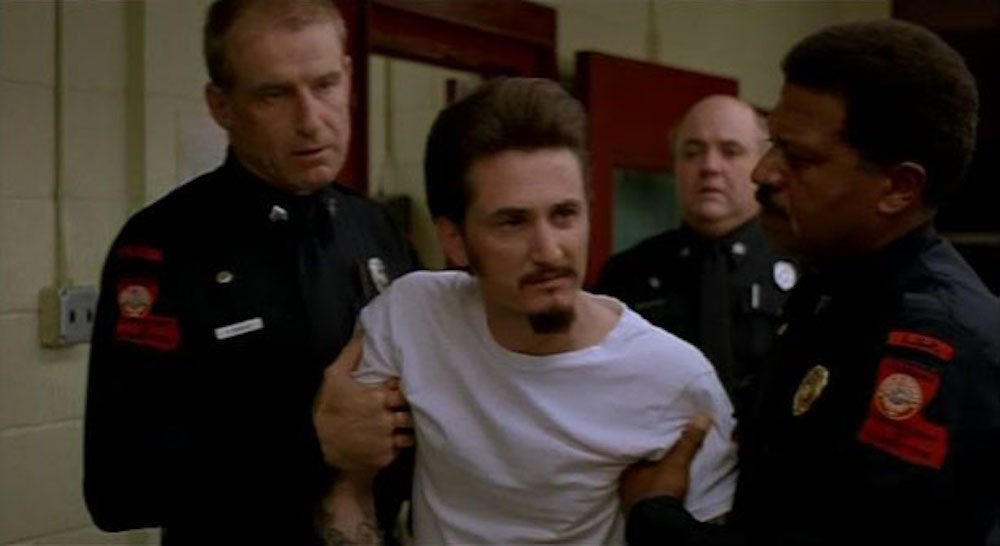 Director Tim Robbin’s dramatic film about viewpoints on capital punishment told about a death row Louisiana prisoner convicted of murder. Matthew Poncelot ( Sean Penn) is ordered to die via lethal injection. His comforting spiritual counsellor Helen Perjean ( Susan Sarandon) was able to have him confess his death and ask for forgiveness from victim’s families. Sean Penn delivers a power packed performance and his words to the victim’s families include – “… I hope my death gives you some relief” . Until the very end, sister Perjean poignantly assures him while he is strapped on cross-shaped gurney, as the victim’s families and nun witnesses the capital punishment behind the glass window. 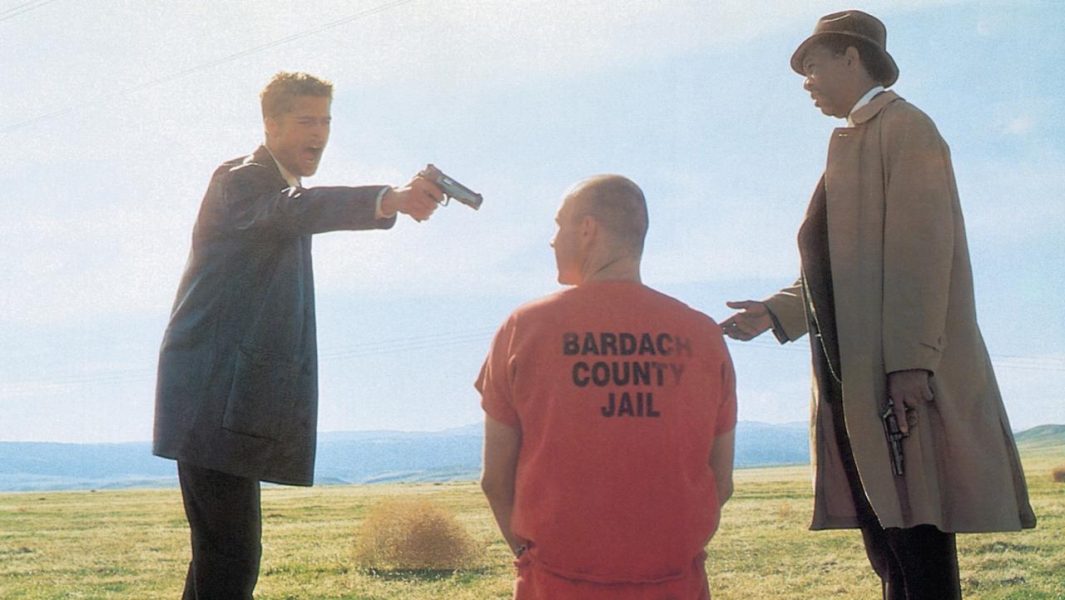 David Fincher’s crime thriller ended with an unforgettable, nail-biting, concluding climax. Maniacal serial killer John Doe ( Kevin Spacey) leads arrogant Detective David Mills ( Brad Pitt) and Detective Somerset ( Morgan Freeman) to a remote desert area , promising to reveal the last of the two dead bodies ( the last two of seven deadly sins- gluttony, greed, sloth, lust , pride , envy and wrath) and give his confession. Doe confesses his sin of envy ( killing Mill’s wife) and to demonstrate wrath, anguished and angered Mills empties his gun , in revenge for his pregnant wife’s beheading. The film ended with words- “The world is a fine place and worth fighting for”. I agree with the second part.

In the surprising conclusion of the popular 1950’s style, post noir crime drama about police corruption, Sgt. Jack ( Kevin Spacey) is suddenly and shockingly killed. Like others, he had been receiving kickbacks for aiding arrest of celebrities. He is shot point blank range in the heart with a point .32 by LAPD Capt. Dudley Smith ( James Cromwell) in his kitchen for knowing too much. The murder revealed the film’s ultimate bad guy and mastermind. 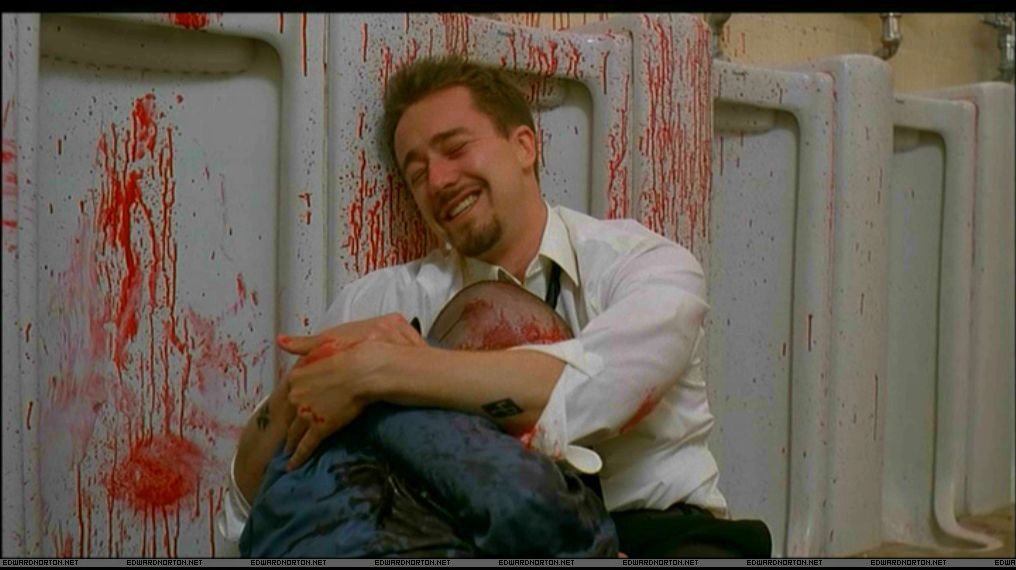 Tony Kaye’s controversial drama told the story of two brothers living in venice beach, California and the results of racial hatred, intolerance and violence. In a tragic death scene, Ex con and ex neo nazi white supremacist Derek Vinyard ( Edward Norton) cradles the bloodied body of his dead brother Danny( Edward Furlong) in his arms in a school bathroom after he had been shot three times in front of a bank of urinals by another black student. 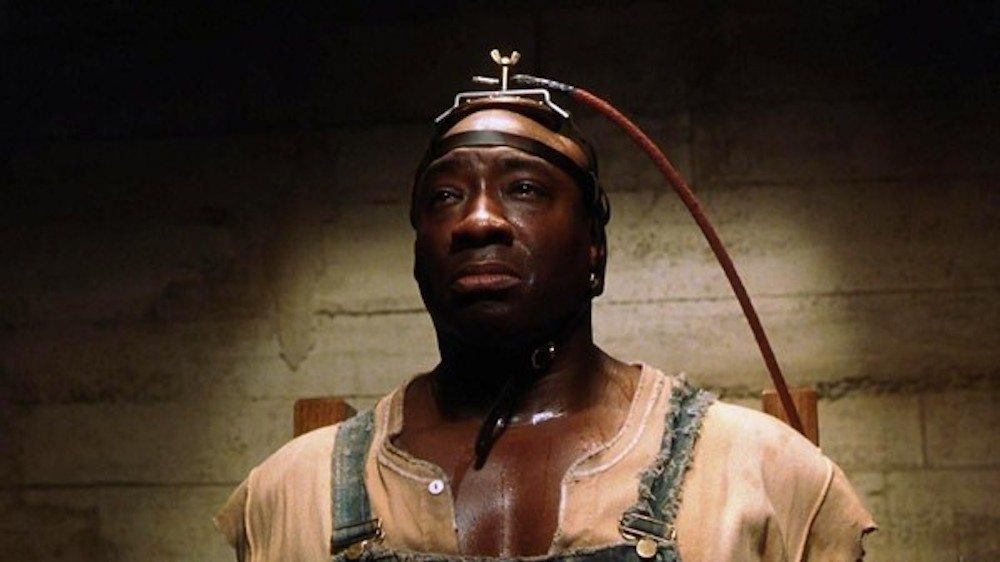 After “The Shawshank Redemption” , director Frank Darabont’s second prison film was set in the 1930’s where the death row was nicknamed “The Green Mile” because the floor faded lime green linoleum. The execution of Coffey ( falsely implicated ) using gruesome electric chair was the one to behold. John Coffey – the doomed, noble illiterate , mystical child and faith leader was being punished for the alleged crimes ( rape and murder of two young white girls ) that he didn’t commit. Head death row prison guard Paul Edgecomb ( Tom Hanks) agrees tht a required black hood wouldn’t cover his head because he feared the dark. He first shakes coffey’s hand as he remembers his words spoken in voice over : “ He kill them with their love. That’s how it is everyday all over the world”