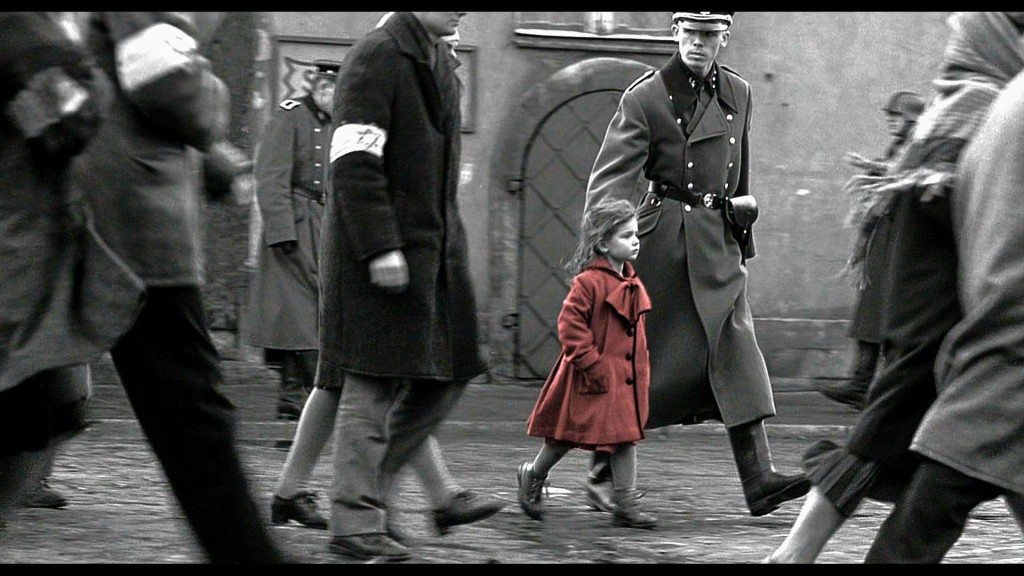 About an hour into this 1993 epic drama, there is an extensive sequence of a Jewish ghetto being liquidated. This is the early 1940s in German-occupied Poland, where Jews were already segregated into the Kraków ghetto, where they were meted out with inhuman treatment. When the new concentration camp is built, the massacre begins. Thousands of Jews are rounded up and killed; men, women, children; nobody is spared. All this barbarism is going on, and our protagonist, Oskar Schindler, a German war businessman and Nazi Party member looks on helplessly.

Perhaps it is the live images of humanity dying in front of my eyes or the painful knowledge that this actually happened; but I couldn’t help the tears rolling down my eyes. I am not the crying type, especially while watching movies. I do get emotional, but this was one of the rare occasions when I couldn’t help shedding tears, in desperation, in anguish. This emotion held on for the full three hours the movie played and left me distraught. I couldn’t help feeling terrified thinking what one man and his paranoia could do within such a short span of time!

Any modern historian will tell you that the World War II was perhaps the deadliest war ever fought, which saw the onset of a new world order. And perhaps the most significant historical event of the last century would be the holocaust, an attempt by Nazi Germany to exterminate the entire Jewish race. It is also perhaps the deadliest attack of terror on the world in the past 100 years or so. While several filmmakers have made excellent movies documenting the holocaust, including some exemplary works in Claude Lanzmann’s ‘Shoah’ (1985) and Orson Welles’ ‘The Stranger’ (1946), none of them could widely reach the public. And then, in 1993 came ‘Schindler’s List’.

Directed by acclaimed filmmaker Steven Spielberg, ‘Schindler’s List’ follows the story of Oskar Schindler, a German businessman in Poland who profits from the war, who later uses his fortune to save his Jewish workers from extermination. This was a challenging work for Spielberg, known then for his blockbusters like ‘Jaws’ and ‘E.T. the Extra-Terrestrial’. Shot entirely in black and white, except for certain sequences, the movie was both a critical and commercial success upon release, winning 7 Academy Awards including Best Picture and Best Director. Today, the movie is considered to be Spielberg’s greatest work and one of the greatest films ever made.

Spielberg consciously departs from any unnecessary drama and theatrics, for which he is known, and lets the story run own its own. A Nazi Party member, Schindler lavishes bribes on the German officers, while employing a Jewish officer, Itzhak Stern (played brilliantly by Ben Kingsley) to hire Jewish workers since they cost less. With his new-found wealth and influence, Schindler leads a pompous life, until the Kraków getto liquidation, when the massacre affects him emotionally. The movie follows his subsequent efforts to save the rest of Jewish workers, using his wealth and influence.

Subtlety is not something you usually expect from Spielberg, a filmmaker prone to a lot of flamboyance and style. But, with ‘Schindler’s List’, he moves to uncharted territory, with the content doing all the talking. The pace is slow, taking its sweet time in developing the characters and the story. The screenplay by Steven Zaillian, (based on the novel Schindler’s Ark by Thomas Keneally) is excellent, with a lot of emotional depth, and Spielberg turns the material into gold, with his restrained execution. The cinematography is unique, with the movie shot in documentary style, lending it authenticity. The camera pans over the streets of Kraków, eerily capturing the despair and terror in the air.  The Academy Award winning musical score by John Williams  not only complements the overall feel, but takes it to a next level. The music does an incredible job in capturing the horror of the holocaust, while keeping the hope in humanity alive.

Despite the restraint, Spielberg has shown flashes of his genius in portraying various visual motifs, creating a movie that has more to it that what meets the eye. In a brilliant stroke of touch, the movie was shot in black-and-white, which contributes the narrative and clearly portrays the holocaust as devoid of humanity and life. Another masterstroke was the portrayal of the girl in the red coat. Schindler sees a girl in a red coat (the only color shown in the movie) trying to hide from the Nazi guards, during the Kraków liquidation. Later, he sees the same red coat amongst a sea of dead bodies, realizing that the girl has died. Schindler breaks down to tears, in one of the movie’s many brilliant sequences. While many interpretations can be drawn as to the symbolism of the red coat, the most potent one would be that it represented the ignorance of the US government to the holocaust during the war. It was as obvious as the girl in the red coat, yet they chose not do anything about it.

It would be blasphemous of me not to talk about a particular sequence in the film; an example of the Spielberg’s craft. In an apparent mix up, a train full of women and children are accidentally redirected to a concentration camp. They are stripped naked and taken to a gas chamber. Minutes of fear and tension build up, with the women assuming that they are about to die, only to realize that it was just a shower. The sequence was exquisitely shot and executed, making it among the most terrifying sequences in the history of cinema.

The performances are among the best you would ever see. Oscar Schindler isn’t your typical hero. He is a man of many flaws, an opportunist, a corrupt businessman and an adulterous husband. He could have been any of you, an ordinary human, finding his humanity under adverse circumstances. And these nuances are well captured by Liam Neeson, in what is a career best role. There is genuine emotion in his eyes, and we see the horrors of the holocaust through his eyes. Another notable performance is that of Ralph Fiennes as the evil German officer Amon Goeth. The sadistic Goeth randomly shoots camp internees, for no reason, in a horrifying depiction of Nazi excesses. Fiennes nails the role and immerses himself into his character, giving us one of cinema’s greatest villains. Ben Kingsley too impresses in his role as Itszhak Stern, giving a solid performance.

I have seen this movie only once – yes, and I probably might never see it again. Such has been its impact on me, that a second viewing is unnecessary. And also perhaps I couldn’t bear to go through the emotions I went through the first time. Few movies have that power; the power to not only move you, but also inspire you to believe in humanity in the face of adversity. The holocaust was perhaps the most dreadful event in recent history, and ‘Schindler’s List’ not only successfully revisits those dark times, but it also gives us hope, while motivating us to do our bit, just little things, to make our world a better place.

In these times of terror and strife world over, let us not just sympathize; let us do our bit, because as the Talmud says “Whoever saves one life, saves the world entire!”