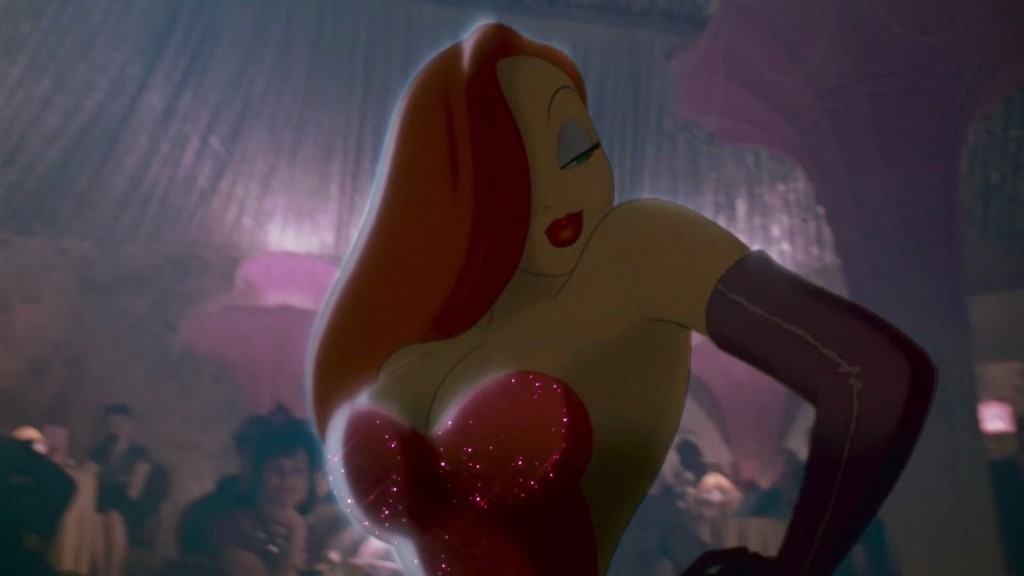 “The past can hurt. But in the way I see it, you can either run from it or learn from it.” – The Lion King

With quotes like these, adorable, memorable characters, guileless fun-filled plots and life lessons by the bucketload, children’s films have a special place in my heart. Even at the age of 22, I can’t help but go back to some of my favourite childhood films as well films made for children these days. And while it is often a treat to watch such innocent fares, it is a curse, because of my increased perception as an adult to sleazy, sly and often secretly sneaked-in innuendos which are rife across a lot of films intended for children. I almost wrecked my childhood when I re-read Harry Potter a year ago and noticed a whole bunch of… uh… racy lines for the first time (like the ones mentioned here. Open at your own risk). Similarly, films we watched with a childish innocence once and ones the current generation of kids watches with wide-eyed love often have a few jokes for the parents too!

Disney, the historic market leader in this demographic, actually have a decorated history of inserting “blink-and-miss-em” dirty jokes in their films, something they have vehemently denied on multiple occasions. Now, new blood Pixar, too, doesn’t lag behind in the subliminal humour race. So, here are all the sexual innuendos in children’s films we could dig up. There were a lot of “pause” moments involved. Prepare to be shocked!

Disclaimer: This post contains explicit language and visuals. Those who are underage (and/or easily offended), please steer clear.

At 1:12 in the above video, when Bambi’s friend Flower kisses this male skunk, he turns bright Red and stiffens from head-to-toe. So cute right? Riiiight. This was perhaps the first erection innuendo in a children’s films. 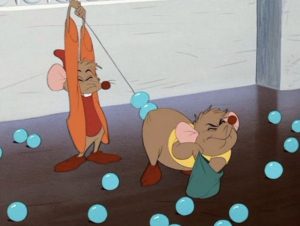 Disney’s habit of filth-ifying their films stretches all the way back to the 50s. ‘Cinderella’ is more than just the story of a mistreated step daughter turned princess, it also is the story of two best-mouse-friends, Jaq and Gus. Jaq and Gus did everything together – got into trouble together, ate together, went on adventures together and experimented together. Yes, that’s right – Jaq and Gus experimented together. Remember the scene when Jaq and Gus are scrambling to collect the beads from a broken necklace? Jaq and Gus find themselves in an odd position when Jaq begins stringing the beads onto Gus’s tail. Although this scene seems playful, us foul-minded adults can interpret their actions in plenty of non-innocent way. I won’t suggest any, but look at the carefully paused picture for a second and tell me what comes to mind!

In spite of its key demographics, ‘Willy Wonka & The Chocolate Factory’ has been interpreted to have some serious dark undertones by adults. This classic takes us on a tour of a candy factory filled with a chocolate river, lollipops, gumdrops, licorice, and snozzberries. In one scene, Wonka shows off his newest invention to the tourists: lickable wallpaper. The children and guardians begin licking the wallpaper, when Willy explains, “Lick an orange. It tastes like an orange. The strawberries taste like strawberries! The snozzberries taste like snozzberries.” Veruca Salt questions what snozzberries are, but Wonka never really gives her an answer. Well, turns out, a snozzberry isn’t just a funky, made-up word. So, what is it? According to Roald Dahl, the author of the Willy Wonka book – a snozzberry is the head of a penis. Imagine that. Now, that is some wickedly sick sense of humour. 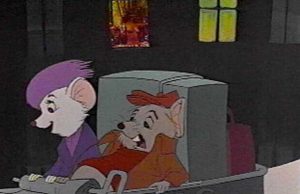 This is posssibly Disney’s most infamous production prank. A topless woman can be seen in two frames (one of which is seen above) of this film about a couple of mice trying to save a kidnapped little girl from a couple of treasure hunters. Unlike their other “misunderstood” scene-stealers, Disney couldn’t flick this away. They confirmed that she’s been in the film ever since its original theatrical release, but was first noticed during its re-release some 20 years later, causing a mass recall of 3.4 million copies.

Aaaah. Gorgeous redheaded Jessica Rabbit. Every Disney fan kid’s premature sexual awakening and the sexiest cartoon ever created IMO (judge me all you want. You know it’s true!) Sure, she was a cartoon, but a lot of people had the hots for Jessica. Seems Disney were happy to play up to her sex appeal: in this scene from the film, Jessica is ejected from a car following a cartoony crash. Using the power of the pause, as the YouTube user above virtuously did, one may notice that Jessica flashes rather more skin during the crash than is appropriate for a kid’s film. Even today, Jessica Rabbit fans online still debate whether or not Jessica Rabbit is wearing panties in this scene. Our suggestion: get off the computer and go take a walk outside. You might even meet a human female!

Nobody loves weddings more than this priest, it would seem. At the climax (no pun intended) of this 1989 flick, a disguised Ursula walks up the aisle to marry Prince Eric. The short, stumpy Bishop marrying the pair has an unsightly bulge in his trousers that suggests his excitement to be a little too… revealing, in the form of an erection. Those with purer minds insisted that the fulsome trouser-mountain was actually the priest’s knee — but, as with Aladdin, Disney, after attesting that it was his knees, decided to later release a new version of the film, where the bishops’ “knees” were removed from the scene. 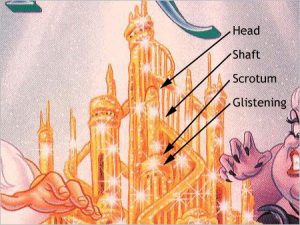 Another instance is the infamous ‘Phallus Tower’ in the castle of the king, who, perhaps was compensating for something. I found a handy diagram directing to the various parts for the ones not so sharp of eyesight!

Now this is a famous one. When you have a guy like Robin Williams voicing one of the supporting characters, you know there’s going to be some throw-away jokes for the parents of the audience. In the 1992 classic, Aladdin tries to woo Princess Jasmine on her balcony, only to be confronted by her tiger. As the shot cuts away, we can still hear Aladdin stammering to the angry tiger in the background — including what sounds suspiciously like the line, ‘Good teenagers, take off your clothes’. Disney claimed that the actual line was ‘Good kitty, take off and go,’ but did replace it with the phrase ‘Down, kitty’ for the DVD release of the film. This is one innuendo where we could have been brainwashed into listening to the crude phrase, but listen for yourself and decide! 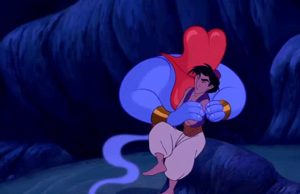 Further, after the Genie once again saved Aladdin’s life, he explains that he was getting pretty fond of him, but then clarified by adding, “Not that I want to pick out curtains, or anything.” Basically the genie just needed to set the record ‘straight’ (pun intended). For the non-punny ones, he’s just stating he ain’t gay!