Review: Spelling the Dream Lacks the Brilliance of its Subjects 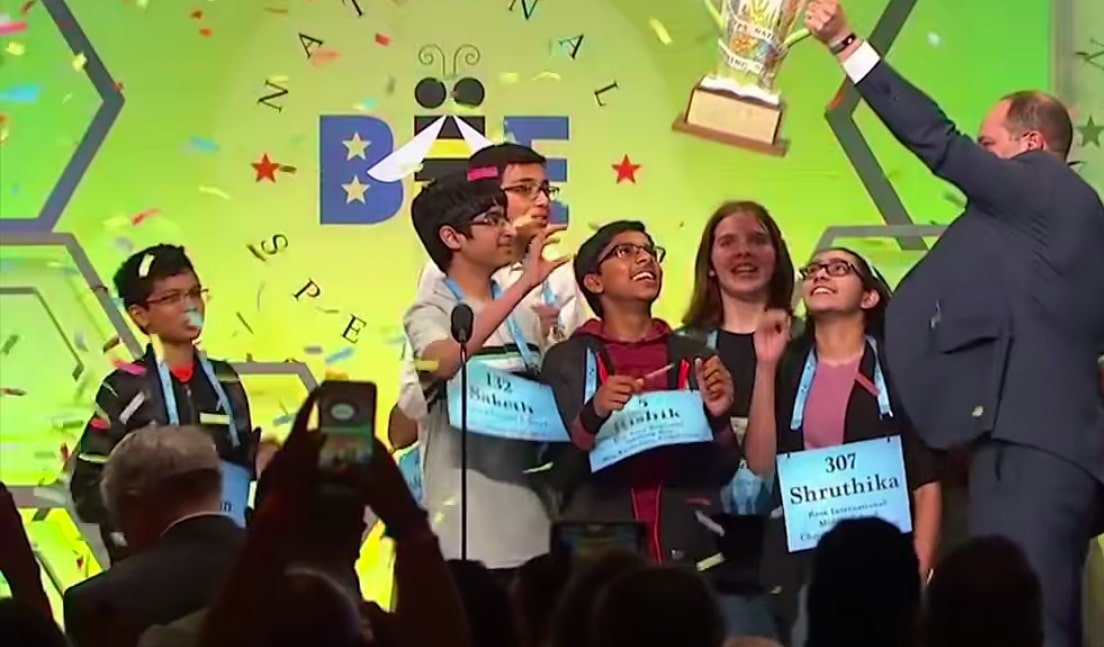 The documentary film, ‘Spelling the Dream,’ directed by Sam Rega, attempts to explore the rising dominance of Indian American children in the arena of spelling bee competitions. Specifically, to understand how these children are able to set the bar extremely high. Over the years, this success has met with its own share of criticisms and speculations.

The film begins with an iconic moment from the 2019 Scripps National Spelling Bee competition. It showcases the Elite 8, who endured three and a half hours of spelling quizzing, to remain unwavering till the very end. The 8-way tie led to the Octo-champions walking home with $ 50, 000 each. It is here that the film throws its research thesis. Seven out of those eight children were Indian Americans. The film thus establishes this decade of winning dominance starting from around 2008, but predating back to 1985, through Balu Natarajan, who was 13 years old when he won the Scripps National Spelling Bee.

The documentary then focuses on four children and their families preparing for the 2017 Scripps National Spelling Bee. Akash Vukoti, Shourav Dasari, Tejas Muthusamy, and Ashrita Gandhari have their own way of prepping, but one common denominator they all share is the kind of effort they put in to stay on top of the game. Additionally, there are interviews of several other former Scripps National Spelling Bee winners—CNN’s Sanjay Gupta, Hari Kondabolu, and ESPN anchor Kevin Negandhi. They add their experiences and observations to put emphasis on the larger picture.

The documentary uses archival video footage, interviews, and videos of these children preparing to answer the reasons why Spelling Bee competitions are almost a collective family affair to many of them. Importantly, it also addresses several racial backlashes it has received over the years.

‘Spelling the Dream’ is definitely a fresh take in terms of its central topic. It not only looks at these children but also their parents and families to understand the source of their motivation. First and foremost, it addresses a substantial point in history that was extremely important for many Indian Americans at present—the Immigration and Nationality Act of 1965, signed by President Lyndon B. Johnson. This provided an opportunity like never before for several Indians to come to America to chase their version of the American dream. As the documentary states, many of them at the time were also quite educated and went to become doctors and engineers throughout rural American towns. Hence, the concept of hard work, faith, and self-determination has been a driving force for many of them.

The sentiment is best captured in what Akash’s father says. According to him, they were able to do quite a lot considering they flew to the US to create an opportunity for themselves, from a rural village in India. Hence, he believes that his children, born in the US, should be able to achieve a lot more. While this sentence may sound liberating, as it may rightfully be to them, it is quite problematic in another sense. And this just might be the juncture at which the documentary fails to lift a certain stereotype of Indian Americans in the documentary.

The documentary addresses the kind of racial backslash many of these Scripps National Spelling Bee winners have received just because of their Indian descent. The racist comments range from an urgency on certain people’s part to see “more Americans win” and “why all these winners are Indians?” As comedian Hari Kondabolu puts it, the answer is quite simple—these children are Americans. But of course, the racist sentiments rise from the Indian descent of these children. And thus, the documentary targets the fundamental problem of Indian Americans not being seen as American enough, whatever that might be. The nation, which is a melting pot of different cultures, is globally seen as a land of opportunities, which is then undercut with such statements. Thus, the documentary calls out the racial lens through which many of these spellers are seen.

That said, one of the fundamental problems with the documentary stems from the same issue. While it is nice to see the spelling bee competitions being shown as a family affair, which at many times they are, the documentary does very little to lift the subtle stereotypes of the hovering Indian Diaspora.

The documentary film also falls flat after a point to merely depict how the competition went about for these four children and some others. However, what most don’t see is the kind of life they lead after their prime years in the spelling bee competition. The film focuses on this bit only occasionally, with a bleak note of them taking up other passions in the future. Thus, the documentary is a blend of some iconic moments, the backstory of some amazing spellers, and the many bits that could have been worked on to make it a more compelling, insightful, and comprehensive narrative.