TIFF Review: ‘Stronger’ is Jake Gyllenhaal’s Show All the Way 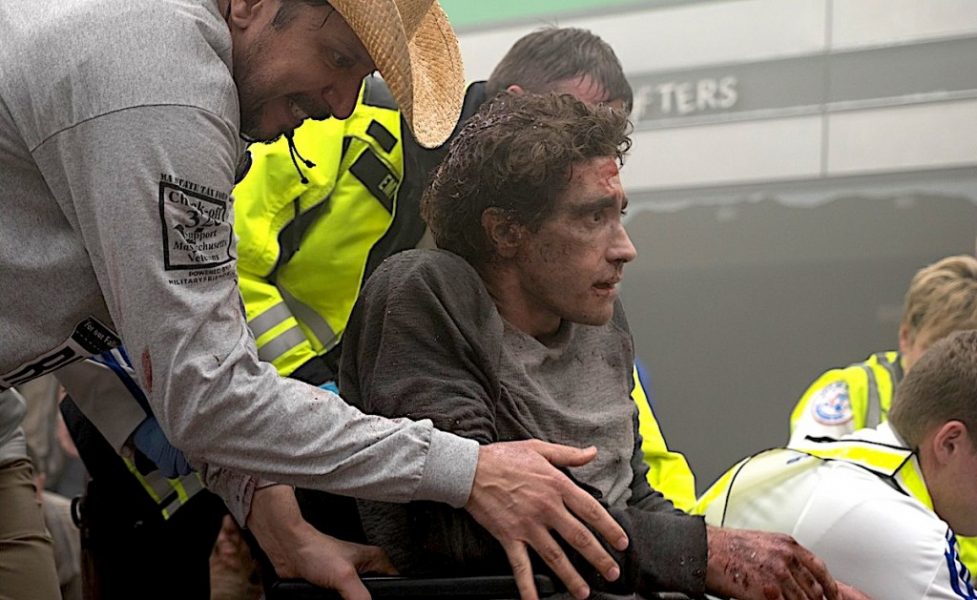 Some films just speak to you. Though the screening was jammed with press, I felt like this film was speaking directly to me. In many ways it struck very close to home, sometimes too close. More than once harsh memories washed over me, cold sweats came, even nausea. (In 2001, I was involved in a near fatal car accident that left me in a coma for three and a half weeks)

Imagine being Jeff Bauman (Jake Gyllenhaal) and waking to both your legs gone? Not broken, not injured, but gone.

A likeable screw up of a person, Jeff worked at Costco, cheered for the beloved Red Sox, and was trying to back into the good graces of his ex-girlfriend Erin. Deciding to show her he can show up for someone other than himself he goes to watch her run in the Boston Marathon, and is terribly injured when the bombs set by young terrorists explode near him.

Waking up to find his legs gone, Jeff begins adjusting to the dreadful pain, but more and deeper, the alterations of who he is now as a person. With the support of Erin (Titania Maslany), he egging the long, arduous and unspeakably process of finding his way back into life. Not just his life, but life in general because as much as we want to believe we are important, life moves savagely without us.

Gyllenhall gives one of the finest performance of his career as a Bauman because the actor (and his director) choose to portray the character warts and all. Jeff is often dislikable, as are we all, and it was refreshing to see a film such as this where the hero is not noble and basking in rays of goodness. He was hurt, for no reason, his legs are gone, he is in constant pain and pissed off. But rather than fall into a pit of self pity and despair, he eventually channels that anger and rage into healing, into learning to walk again, into living. Yes he angers people, and yes he can be cutting and cruel, but necessary tools to survive. This should finally land the actor a nomination for Best Actor.

What I really liked about the film is the director had the courage to explore how the impact of the tragedy that befell Jeff, impacted everyone around him in different ways. His mother, a drunk, wants the entire nation to know her son is a hero, and goes to extraordinary lengths to make that happen. No question her love runs deep, but we also question her thinking and the “what’s in it for him” mentality that Jeff does not possess. And his girlfriend Erin, who stands beside him at the beginning of this journey, but tires of his spiral and drunken escapades, which she more often than once is left to clean up. Her greatest war is fought with his family as only she is aware of the dreams and nightmares that haunt Jeff, the memories of that day walking that landscape of his memory.

Maslany is an Emmy Award winning Canadian actress, best known for her stunning work on televisions’ Orphan Black, and a handful of performances in Canadian films. I have watched her for a long time and believe she will be a major actress for many years to come. As Erin she is outstanding, the much needed rock on who Jeff leans, but also the target of his abuse, which she does not deserve. In the end she proves every bit as strong as he is. It is an exceptional piece of acting that could draw talk for Best Supporting Actress.

This is the second major film in a year to deal with the tragic Boston marathon, last years under appreciated and superb Patriots Day (2016) being the first. Each wisely chose to deal with the very human elements of the story. Smart move. An exceptional work that struck very close to home for me.