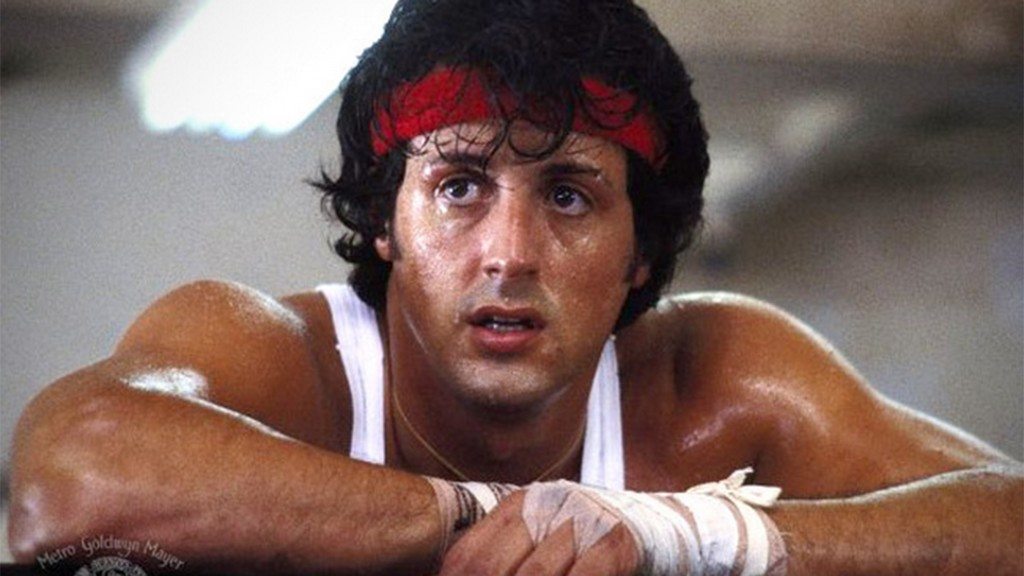 Sylvester Stallone is one of the oldest names in Hollywood today. Gaining popularity with series like Rocky and Rambo, the Italian Stallion has proved his worth whenever it has mattered the most. Athletically built with a chiseled face worthy of a great actor, Stallone is considered in the league of great actors like Arnold Schwarzenegger, Bruce Willis, and Mel Gibson. Through his 47-year long career, he has been a part of many blockbuster and phenomenal films. Here is the list of top 15  Sylvester Stallone movies you must watch. A treat for the many fans of Sylvester ‘Rocky’ Stallone. One of the lesser known movies of Sylvester Stallone, it’s one of the better performances of him, in spite of the haphazard plotline. Of course, for various reasons this film has also become a kind of cult classic; so much so that it was remade with Karl Urban in the lead. The story revolves around the life of Dredd (Sylvester Stallone), a Judge living in the Cursed Earth of year 2139. There is no police or jury in this world; just the judges. They do the work of a judge, jury, and executioner, and Dredd is the toughest and strongest of them all. However, one day Dredd himself is charged with a crime he didn’t commit, and sent to prison. Get ready for an action-packed movie with all the right amount of firepower.

Robert Rath (Sylvester Stallone) is a professional hitman haunted by his horrid past. The memory of him killing his own mentor years ago is as fresh in his mind as a wound. Robert just wants to retire in peace, but after one of his job gets botched up by someone else, he realizes it ain’t gonna be that easy. A newcomer hitman Miguel Bain (Antonio Banderas) is taking out his targets one by one to prove his mettle. It is going smoothly until Bain gets the contract to kill Rath. Then starts a war of wits between the two seasoned assassins: one with all the energy and one with all the experience. Who will win? 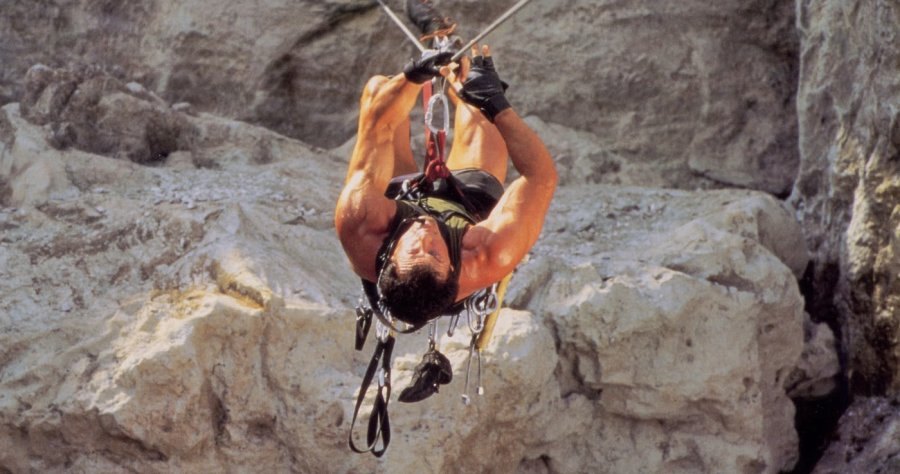 An action adventure film, Cliffhanger tells about Gabe Walker (Sylvester Stallone), a mountain ranger and a former mountain climber. During a climbing accident, Gabe failed to save his best friend Hal Tucker’s girlfriend Sara, for which Hal still blames him. After eight months of that accident, they receive a distress call which turns out to be a trap from a group of mercenaries. These treasure hunters are looking for some suitcases full of cash which had fallen in the Rocky Mountains. At gunpoint, Gabe and Hal are forced to help them retrieve the bags. With some ingenuity, Gabe is able to get away from the murderers. And then he comes back to rescue his estranged friend and his own girlfriend, Jessie. 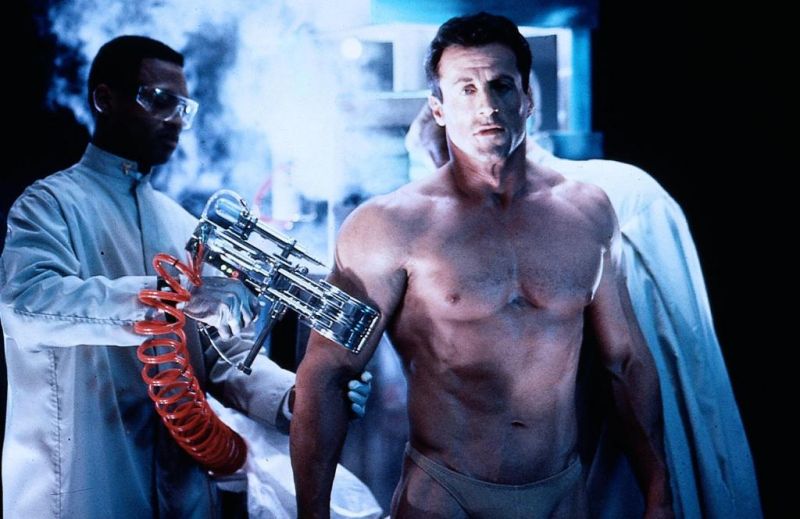 Starring Wesley Snipes and Sylvester Stallone, this one is a science fiction film based in a dystopian future. In 2032, the city of Los Angeles has become a safe haven free from crime and violence. Amidst this peace, Simon Phoenix (Wesley Snipes), a crime lord cryogenically frozen in 1996 is woken for a parole hearing. He escapes and starts wreaking the same havoc on the city as he used to. Unable to apprehend him through their non-violent methods, the government awakes the police officer John Spartan (Sylvester Stallone) who belongs to the same timeline as Phoenix and is his arch-nemesis. 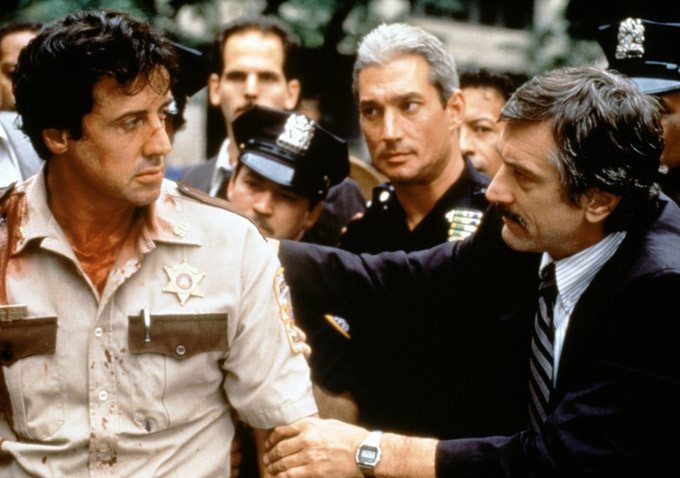 Sylvester Stallone plays Freddy Heflin, the sheriff of the small town of Garrison, New Jersey. Garrison is home to a lot of New York City police officers who live there in hope of peace. Due to being deaf in one ear, Freddy couldn’t become a cop, a job he idolized. When trouble comes knocking in the form of a mob investigation, Freddy thinks it best to avoid it for fear of barking up the wrong tree. However, when he realizes the conspiracy runs far deep than what he originally imagined and that many corrupt cops are in on the game, he refuses to turn a blind eye. This is a good old police drama with some excellent performances from Sylvester Stallone, Harvey Keitel, and Robert De Nero. 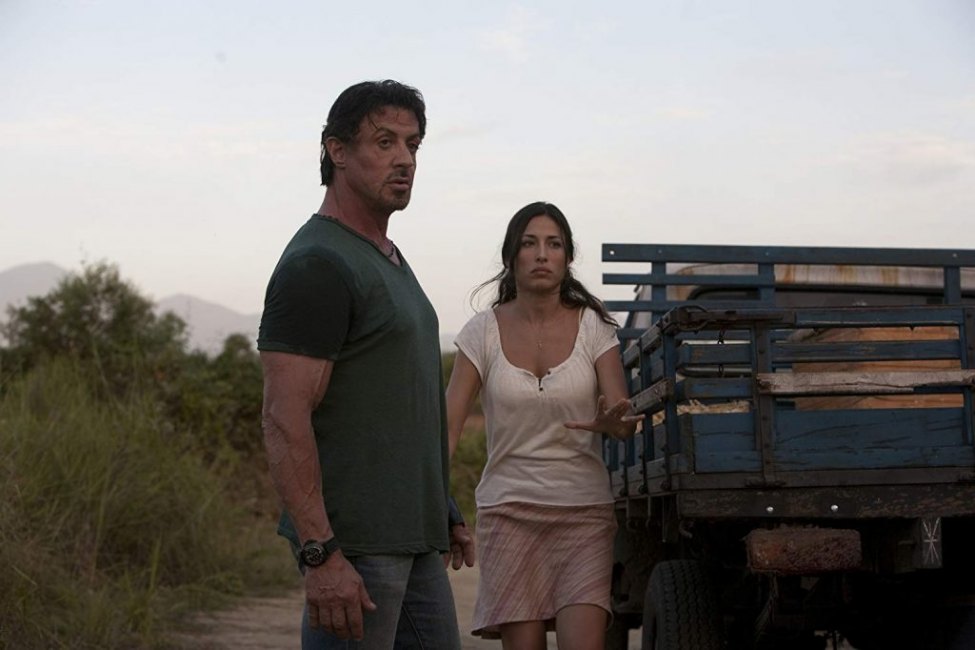 Barney Ross (Sylvester Stallone) is the leader of an élite and deadly group of mercenaries called ‘The Expendables’, who can do practically anything for the right amount of money. A CIA operative called Church gives them a mission to overthrow the evil dictator General Garza from the island of Vilena. Barney packs up with his able team of assassins consisting of Jason Statham, Jet Li, and many other action stars, and flies to his destination. However, when they reach there, the crew realizes that the case is much more twisted than they had anticipated earlier. And of course, there is a girl who captures the heart of our beloved leader Barney, making us realize that love and war don’t mix.

Widening the cast as well as the stakes in the second installment of Expendables series, Sylvester Stallone teams up with an even bigger team of superstars. Mr. Church, i.e. Bruce Willis this time gives the team a mission to retrieve a valuable item from a crashed plane in Albania. Little do they know that an international arms dealer Jean Vilain (Jean Claude Van Damme), and his team is on their trail. Vilain kills one of their team members and escapes, leaving Barney and the crew seething with vengeance. This movie displays some great action performances from Arnold Schwarzenegger, Van Damme, Jason Statham, Jet Li, and of course Sylvester Stallone.

After his friend and competitor Apollo Creed is killed during a boxing match with Russian boxer Drago (Dolph Lundgren), Rocky challenges Drago to a revenge match. The six-foot-five-inch Drago agrees on the condition that Rocky comes to the Soviet Union to fight him. Relentless in his approach and overcome by his grief for Apollo, Rocky agrees. Amidst a raging crowd of Russians, all cheering against him, Rocky trades punch after punch in a 15-round long match of redemption against Drago. Will Rocky’s sheer willpower win or Drago’s raw animal strength? 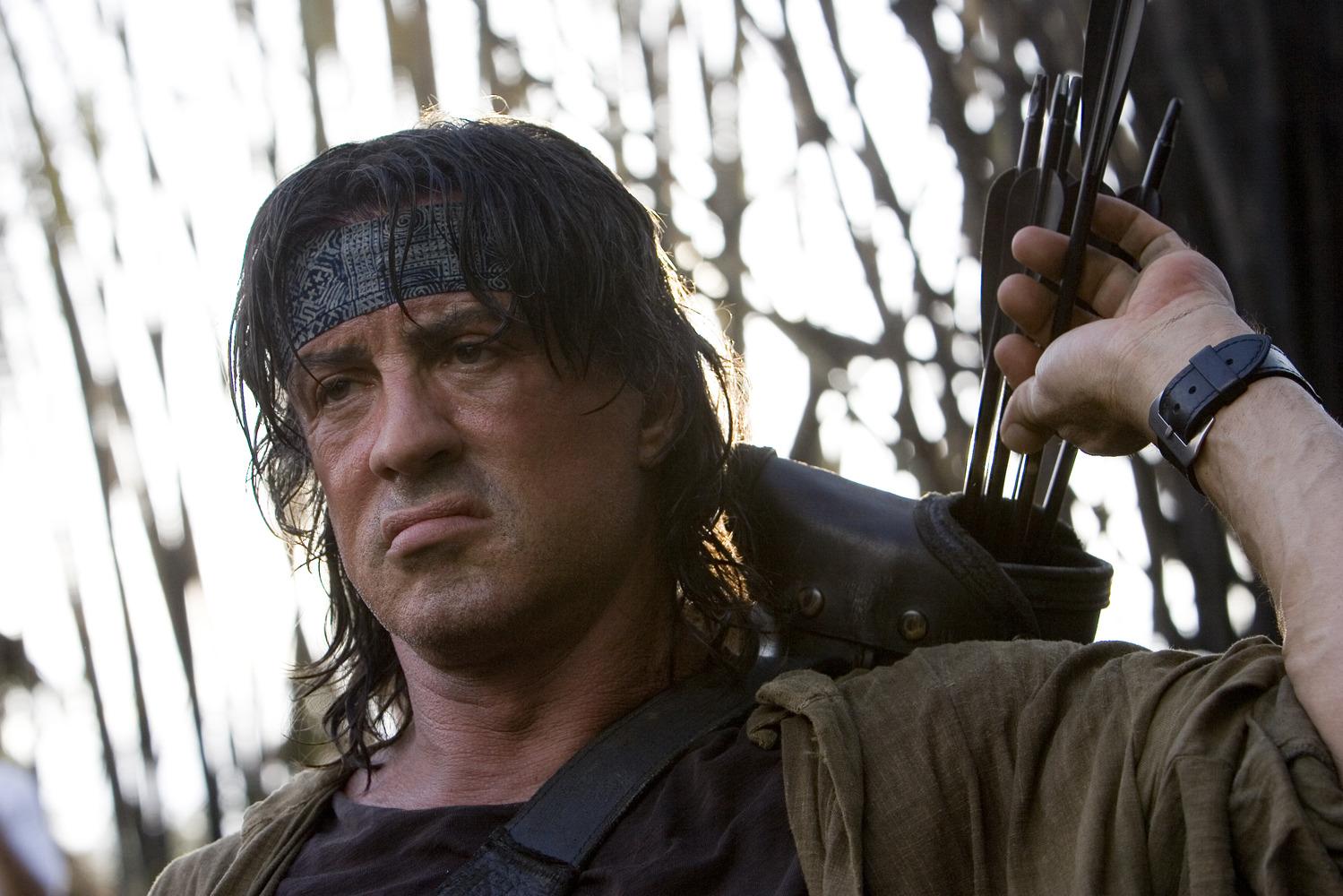 The fourth and final installment in the renowned Rambo series, this movie sees Sylvester Stallone reprising his iconic role of Vietnam war-veteran John Rambo. Worn out by years of fighting, Rambo has become a vagrant working in Thailand and leading a peaceful life. Even though he is looking to avoid trouble, trouble finds him. A group of Christian missionaries rents his boat to travel up the river to Burma. A war-zone torn by internal conflicts, Burma is not a safe place to live, let alone visit. When they reach their destination, the team finds out that the villagers and other missionaries have already been captured by terrorists. Here Rambo has to decide whether to let it go or come in his old form to liberate the captured and punish those who are responsible.

One of the later ones, Escape Plan stars both Sylvester Stallone and Arnold Schwarzenegger. A prison break movie, this one tells the story of Ray Breslin (Sylvester Stallone), a man expert in breaking out of prisons; so much so that he does it for a living. Darkness descends, when under a conspiracy he is sent to an underwater prison from which he can never come back. There he is subjected to all kinds of tortures meant to break his psyche. In the meantime, he meets Rottmayer (Arnold Schwarzenegger), a mafia lord hiding under a false name. Together they come up with an ingenious plan to break out of the prison, which involves fooling the evil jailor with some good old explosions and raining bullets. 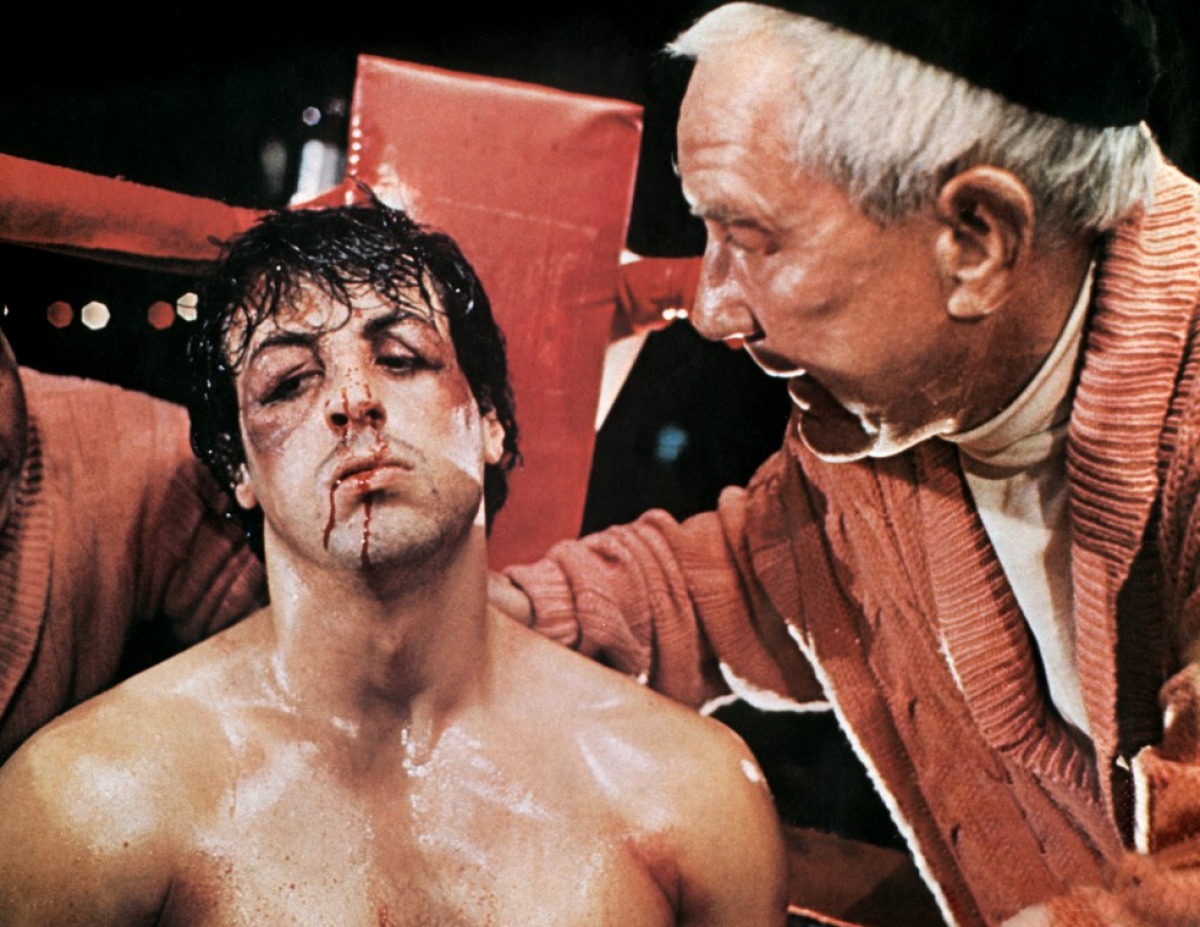 The second installment in the Rocky series continues the story from where the first one finished off. After having won by a narrow split decision, Apollo Creed continues to be the World Heavyweight champion. And after his successful bout against Apollo, Rocky has become a sensation. Fame naturally comes to him, but because of his family life and natural inclination to avoid these things, Rocky ends up in a meat-packing factory thinking his boxing career is over. On the other end, ashamed by his performance in the match against Rocky, Apollo believes that the only way to redeem his honor is to have a rematch against Rocky. Will Rocky prevail this time or succumb to what he thinks is his fate? 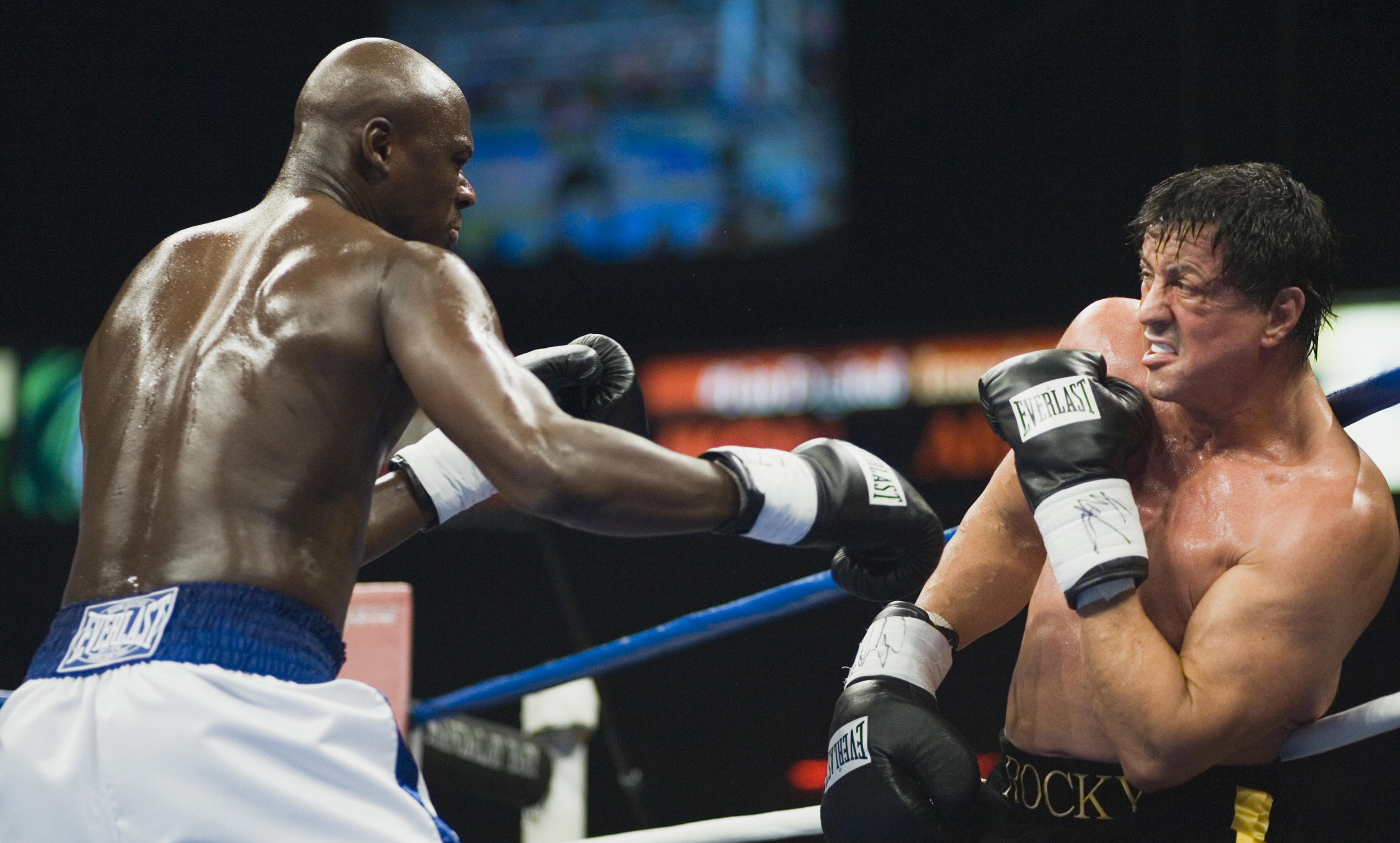 Officially the final installment of the Rocky series, it essentially goes through the life journey of Rocky Balboa as a character and ties a neat little bow for the fans to reminisce about. Although not as action-rich and boxing-oriented as the previous movies in the series, this one has its unique place in the set. It presents the dual side of a boxer’s life by displaying how an aged boxing legend is leading his last few days. Estranged from his son, Rocky now runs a restaurant under his wife’s name and battles with his grief every day. When Mason Dixon, the current world heavyweight champion challenges him to a fight, every cell in Rocky’s body tells him to reject the offer. But Rock defies all odds and gets in the ring for one final glory match to defend all that he stands for. 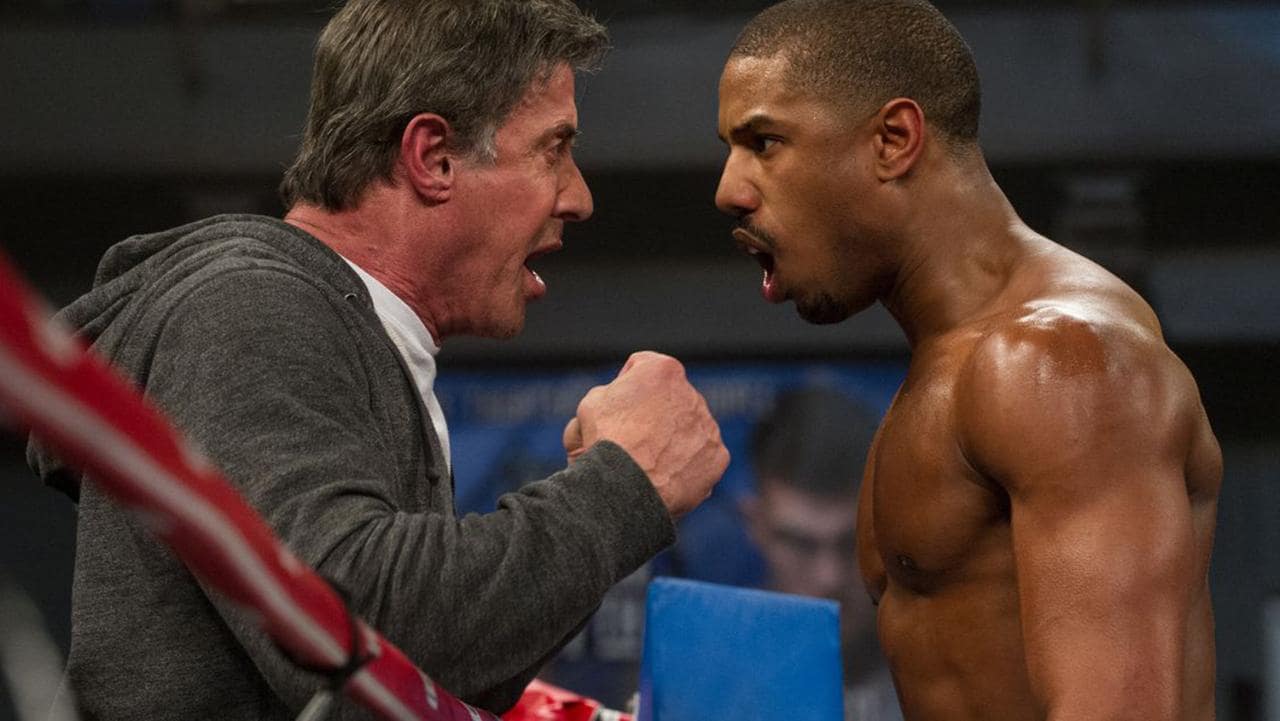 A reboot of the Rocky franchise, this has got be one of the best performances of Sylvester Stallone till date. Other than Rocky, Creed is the only movie for which the Italian Stallion has received an Oscar nomination. Picking up the story of Apollo Creed of the Rocky series, this movie tells the story of Adonis Creed, Apollo’s son. Fighting in underground boxing, he has made a name for himself independent of his father’s legacy. Adonis leaves his job and goes to Philly, in an effort to persuade Rocky Balboa to train him. Defeated by his life outside the ring, Rocky has given up on boxing. However, when a familiar face comes to him, Rocky gives his everything to train the young Creed to reach a pedestal from which he can see his new world. Very intense and insightful acting by Sylvester Stallone and Michael B. Jordan. 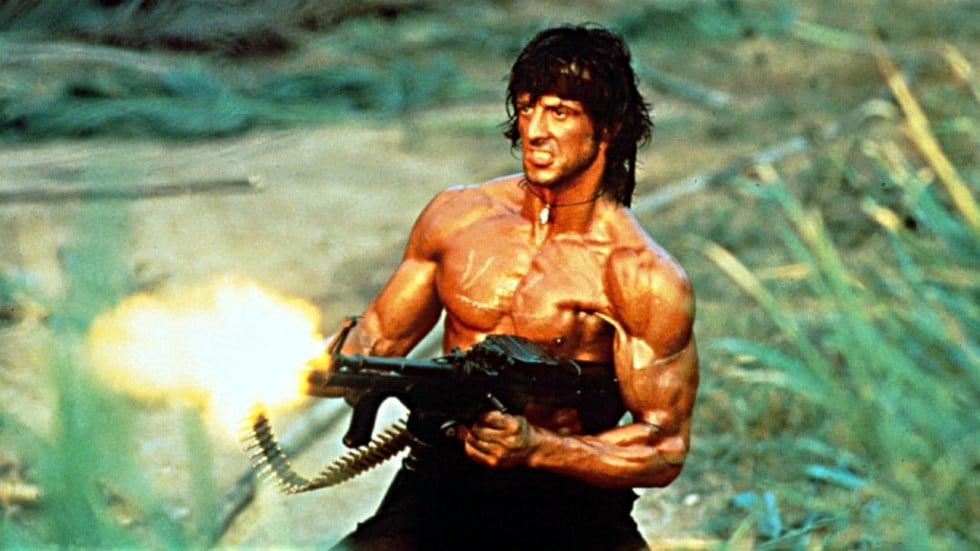 After Rocky Balboa, the most popular character played by Stallone is surely that of John Rambo. The battle-hardened soldier with a strong sense of patriotism, Rambo is a person who can’t be killed apparently. After receiving a Medal of Honor for his services in the Vietnam War, he has retired and wants to live his life far from the perils of war. However during his travels when Rambo gets to the small town of Hope, he is attacked by the local sheriff and his goons. To avoid confrontation he escapes to the forest, but the police don’t leave his trail. When he is forced into a corner, he shows no mercy and comes out all guns and arrows blazing. 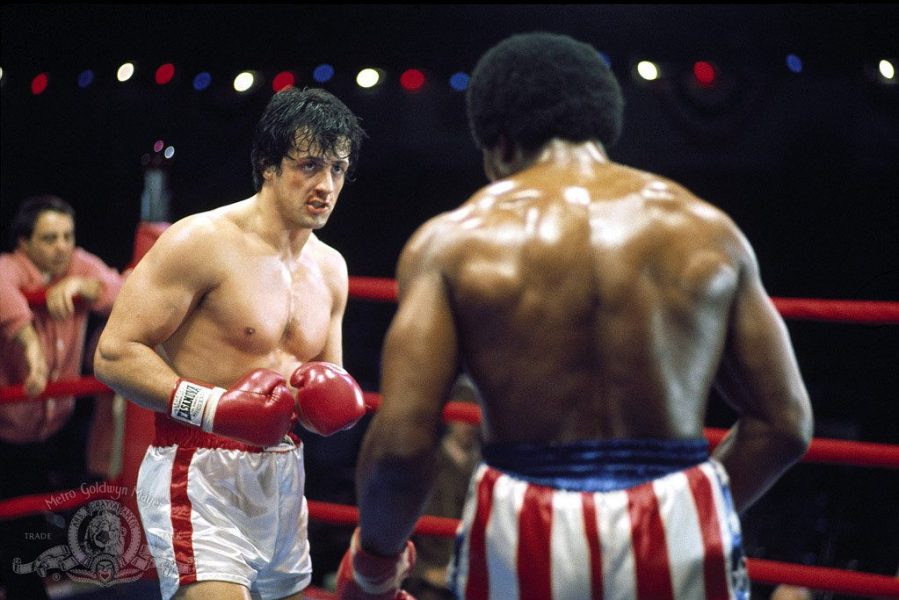 Undoubtedly one of the best movies ever made in Hollywood, and the best of Sylvester Stallone’s career. Written by Stallone himself, the story of Rocky is an emotional and inspirational one. Rocky Balboa (Sylvester Stallone) is a small-time alley boxer who has got nothing but heart inside his warm gloves. When he gets the rare chance to fight Apollo Creed, the heavyweight champion of the world, he knows he has got an opportunity of a lifetime. With blood and perspiration, he fulfills the promise that had been made when he was born. The might of this movie can be understood by the fact that it earned $225 million on the box-office in spite of a petty budget of $1 million. It was exceptionally well received by the audience and critics alike. Rocky went on to receive 10 Oscar nominations, out of which it won three, including the Best Picture and Director. The ‘Italian Stallion’ himself received nominations for both Best Acting and Best Original Screenplay. What more can you say about such a movie except that it was one of a kind?