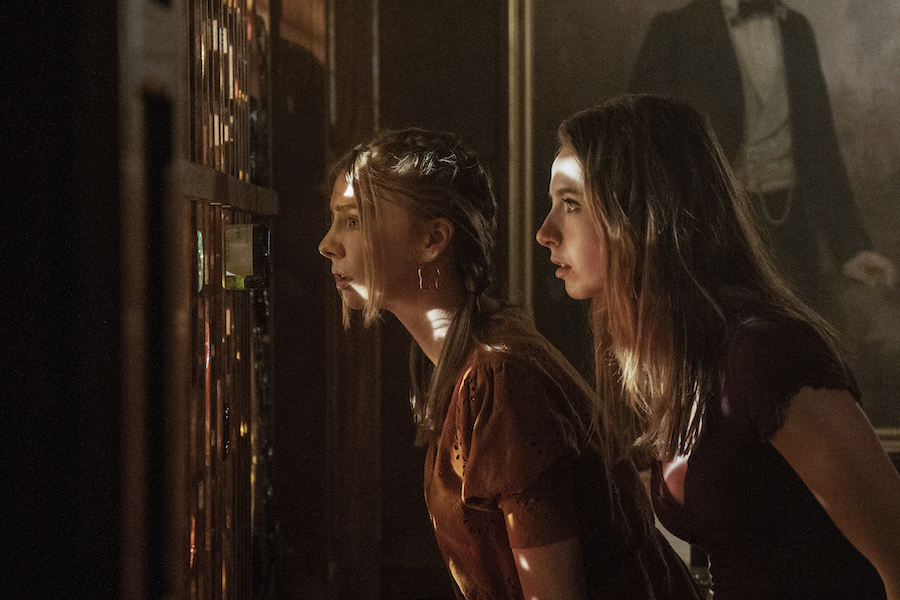 Netflix’s ‘Teenage Bounty Hunters’ follows the story of two girls who form an unlikely alliance with a bounty hunter. The show serves a unique premise, offering the mix of some detective work and action with the usual dose of teenage romance and high school struggles. A twist of religion makes things more interesting, and by the end, all of it combines to serve a shocking finale. If you haven’t seen the show yet, head over to Netflix. SPOILERS AHEAD

Blair and Sterling Wesley are fraternal twins. They are inseparable and fiercely loyal to each other. They go to a Christian school and are brought up with religious teachings that tell them to abstain from sex, drugs, and other vices. While the girls are okay with other restrictions, they go lenient when it comes to romance. Their regular school life takes an interesting turn when they land a partnership with a bounty hunter named Bowser. They turn out to be adept at the job, and their detective skills also lead them to uncovering some secrets in their own family. Meanwhile, they explore their sexuality, with Blair falling in love for the first time and Sterling realizing that she is attracted to April, her worst rival.

Is Debbie a criminal?

While Sterling and Blair get better at the business of bounty hunting and catch all sorts of bad guys with Bowser, they don’t realize that one of the faces on the wall adorned with wanted posters is their mother’s. Blair becomes suspicious of Debbie when she lies to them about her whereabouts. Blair and Sterling had been at their workplace when they saw Debbie in a cab. They thought their mother had caught them and their secret would be out now. But then Debbie lied about being somewhere else, and this made Blair wonder why a straight-A mom like Debbie would have do such a thing.

Sterling refuses to spy on their mother, but this only fuels Blair’s enthusiasm. She follows Debbie around the town. At first, she catches her crying alone in a park and texting them about being late for dinner because she is caught in traffic. Later, Blair finds her at a shady storage unit where she has a stack of money as well as a gun. This makes Blair more paranoid about Debbie’s secret because their mother is one of those people who don’t like guns at all. A little prodding of her father reveals that Debbie had been very good with guns, but dropped them long before the girls were born.

Eventually, Blair gets a lead when she realizes that her mother’s narrative of her childhood home doesn’t match with her old photographs. It turns out that their mother is from an odd little town called Nadina. Together with Sterling, she goes to her mother’s hometown to find out more about her past, which the sisters realize they know next to nothing about. A little digging and some help from a town official bring them to a startling revelation. They find a wanted poster with their mother’s face on it. She had been charged with arson and there is a $90,000 reward on her.

When they confront her about it, she tells them that she had fallen in with some bad people when she was young. Their town had a church called Tabernacle Church of Christ the Redeemer, and from the way she talks about it, the sisters realize that Debbie had been a part of a cult. Conditioned by their thinking, she had burnt down an abortion clinic, which led to the arson charge on her. The girls are assured by their parents that they are handling the situation and that no harm would come on any of them. This is soon proven wrong.

Sterling goes to school for the night out planned for all the kids, but she is heart-broken when April tells her that she is not ready to come out yet. The sudden return of her father has put a stop on her plans to reveal her sexual orientation to everyone around her and because her father is homophobic, she won’t be able to accept her relationship with Sterling in public. A devastated Sterling tries to find comfort in Luke, but then her mother comes to pick her up.

After some strange cues in her surroundings, Sterling realizes that the woman she is with is not her mother. It turns out that Debbie has a twin, named Dana. It was Dana who had joined the cult, burnt down the clinic, and had a bounty on her. Debbie and Anderson had been trying to keep her away from the girls by giving her money all this while. They had also arranged for her to hide in Mexico, but then Dana decided to take Sterling with her. It seems strange why she would do that, but then the truth comes to light and everything makes sense.

Sterling and Blair had grown up believing they were twins, which is why they thought they had this connection where they could converse with each other without anyone knowing. But all their life, they had been living a lie. They were actually cousins, with Sterling being Dana’s daughter. Debbie and Anderson must have adopted her when Dana fell into trouble and decided to raise her as their own. This was also why Debbie was softer towards Sterling, as compared to Blair. In the end, Sterling is freed from Dana and her boyfriend Levi’s grasp. As the truth comes to light, the girls find their whole world suddenly changed.