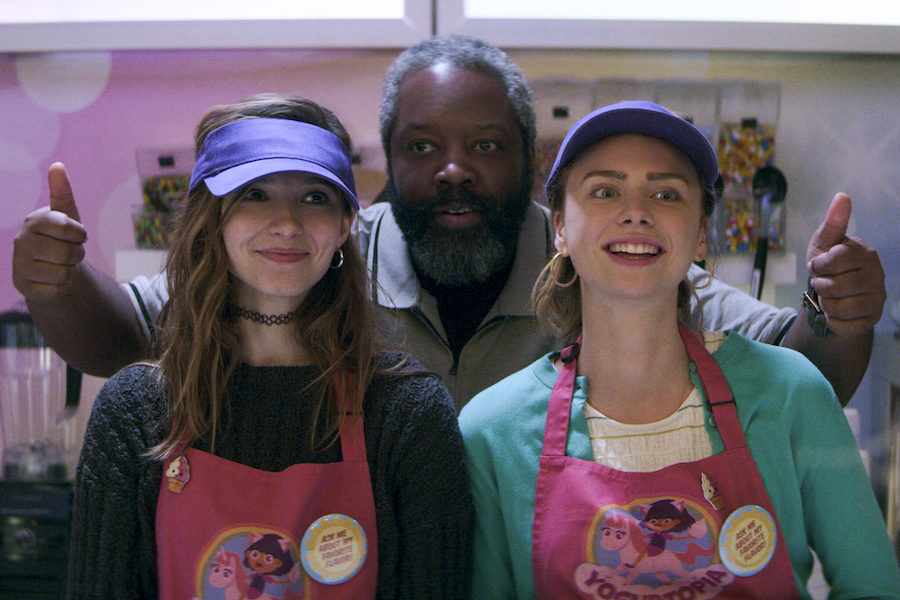 When someone does something good, you expect better from them. With every better act, you start to anticipate better-than-better from them, which also opens the door for disappointment. Netflix had started out with quality entertainment, delivering exceptional TV shows and movies, helping the audience expand their horizon by bringing in the mix of international content right at their door. Considering all of this, we have come to expect only the best from Netflix, but every once in a while it drops something very average. ‘Teenage Bounty Hunters’ is one of those average shows that fail to inspire.

Sterling and Blair are fraternal twins, living in Atlanta with their highly religious family and going to a Christian school. They have grown up with a straight line between good and evil, all the things that can save their soul, and the bad things that are sure to bring them eternal damnation. While the girls try to abide by most of the rules, they are not so orthodox when it comes to romance and their sex lives. Understandably, they keep it a secret from everyone, lest they become outcast in an otherwise privileged life.

Their path crosses with Bowser’s, a bounty hunter who also owns an ice-cream shop. The girls, unintentionally, help him catch a man where he offers them some part of the bounty. The girls come around for another bounty hunting because of their complicated circumstances at the moment but realizing their knack for the job, they decide to stick around and become Bowser’s unofficial interns.

‘Teenage Bounty Hunters’ is just what its name suggests. It follows the story of two teenagers who discover that they have the skills that it takes to be a good bounty hunter. On the surface, the idea might seem interesting, but whatever potential the show makers saw in it before committing to the project doesn’t ever manifest for the audience.

Is ‘Teenage Bounty Hunters’ completely terrible? Not really. It has its moments, and it does have a rather decent start. It quickly develops the “case of the week” kind of structure and gives enough time to the backstory of its protagonists. It doesn’t invest in unnecessary characters and lays the grounds for its mystery of the season. It throws the clues around to stay in touch with them and comes around to them at the right time, just when all the different sub-plots start to thicken, and creates an overall sturdy narrative for the season. But is that enough to get the audience hooked on it? Not at all.

There are a lot of fronts on which the show could have done so much better, the most important of them being its length. Though a season of ten episodes is the norm for a Netflix series, for ‘Teenage Bounty Hunters’, it just seems too long. The plot is not taut enough to keep us interested in all the underlying mysteries for an entire binge. The fact that things are extremely predictable doesn’t help either.

What makes it all the more tiring is that the show runs out of humor pretty early in the season. The first couple of episodes try to set a tone for the story, acclimatizing us to the kind of humor that it is to rely on for the rest of the season. However, even if the wit and comedy charm us in the beginning, it becomes exhausting as the episodes keep rolling. This disinterest is only fuelled by the lack of any attempt by the show to serve a stronger mystery. It even fails to get us interested in the romantic lives of the protagonists, which is generally the focal point of any teenage drama.

As for the characters, the series churns out likable people with varied personalities to keep it an interesting mix. Some of them try to break through stereotypes and challenge other conventions created by society and imposed by religion. As young people, they are also very confident of who they are and are open to exploring the things that they don’t completely understand yet, which is an encouraging lesson to give out to the young audience. But even with all this, we never feel the risk of getting too attached to any of them. We might root for them, but with a lukewarm don’t-really-care feeling, rather than the enthusiasm of passionately shipping one pair over another. The characters are too distant for the audience to create a connection with, and the overall interest in the story suffers from this as well. It gets so bad with every episode that some things start to get irritating and whatever sense we might have previously seen in the series disappears altogether.

All in all, if ‘Teenage Bounty Hunters’ had been a shorter series, I could have advised you to give it a shot, to dedicate some hours of your life to it. But the long haul of ten hours outweighs any merit that the series might try to entice you with.