The Colony Ending, Explained: What is The Bio-Meter? 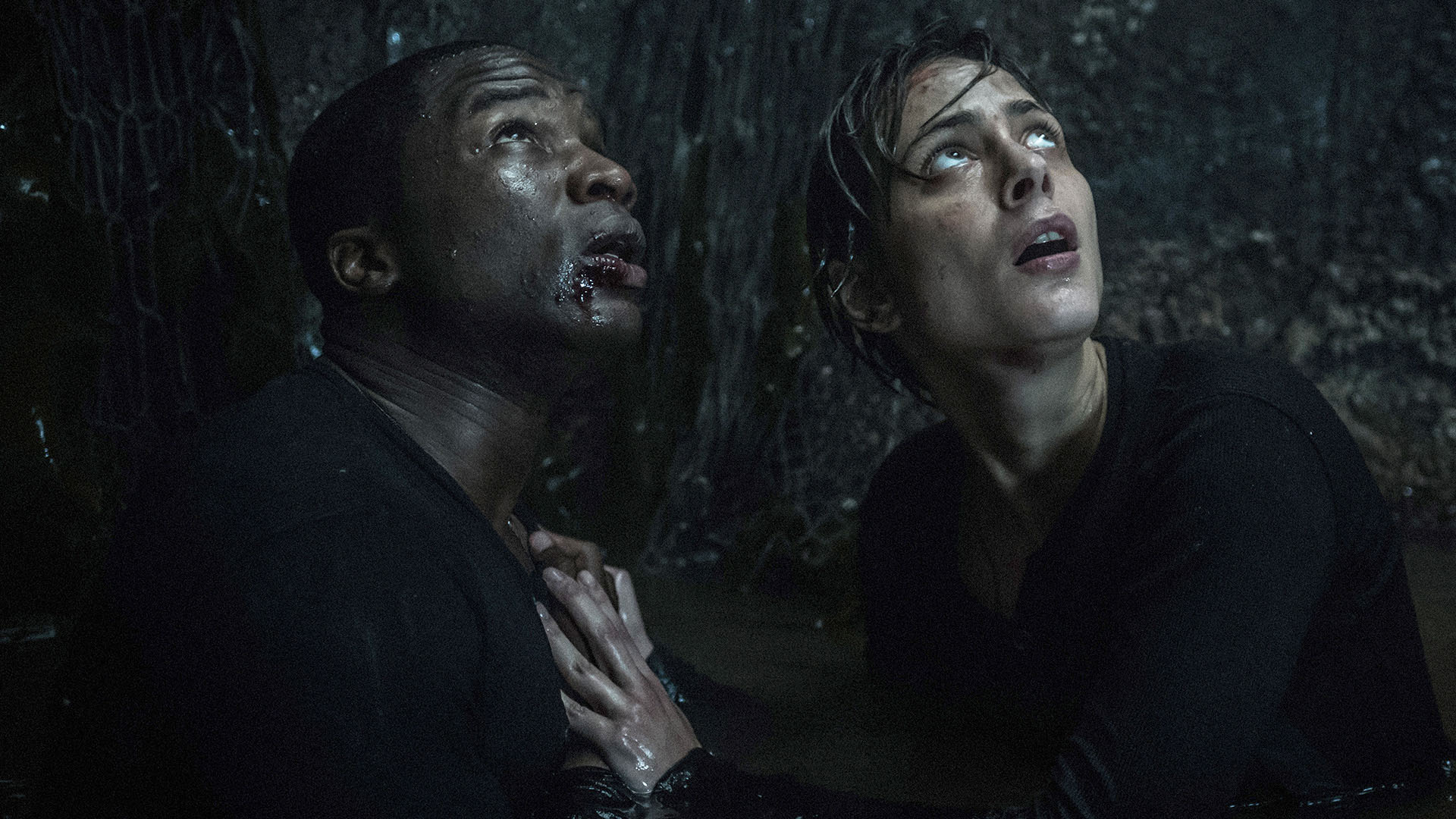 Tim Fehlbaum’s ambient sci-fi epic ‘The Colony’ (originally titled ‘Tides’) reverses the trope of the journey to outer planets to deliver a refreshing and cerebral tale of human resilience. The dystopian story takes us to future Earth. Disasters ravage the Earth, but the Earth may still provide conditions ideal for birth. Elites have settled on the far-off planet Kepler 209, but now they are compelled to make the return journey to extend their species.

After an accident in the atmosphere, Blake must align to the hostile planet. She discovers that the world may not be desolate after all. The open-ended finale leaves several things to the imagination. If you seek to follow the movie’s ending in greater detail, let us travel back to the future. SPOILERS AHEAD.

Title cards give us a context to the story. When pandemics, climate change, and war rendered Earth inhabitable, the ruling elites settled on Kepler 209. Kepler’s radiation reduces human fertility, and humanity on the alien planet faces the threat of extinction. After spending two generations on the planet, the settlers embark upon Project Ulysses, a mission to return to Earth.

The first mission, led by Blake’s father, has failed, and the movie begins with the descent of Ulysses 2 on Earth. The spaceship encounters trouble in the stratosphere and crashes on the planet. Holden has passed on to the other side by the time they land, and Tucker is injured. Blake decides to do the first recon by herself.

After taking the water sample, Blake finds a “Chelicerata,” a kind of crab. The astronauts have been away from Kepler’s radiation for 563 days, and Tucker orders Blake to run a fertility test. The result is negative, but there is hope. Blake also discovers an Aurelia Aurita — a kind of jellyfish — and gets stung when taking a sample. The cyclical fog descends, and Tucker lights up a flare.

But before Blake can get back to the pod, a primitive tribe discovers the ship, taking Blake and Tucker hostage. The locals keep the astronauts in a sewer-like prison. The “Muds,” as they are called in Kepler terminology, also take the pod, the bio-meter, and other equipment. Now Blake must find the bio-meter and reconcile with her presumed dead father, even if it takes killing a fellow Kepler.

The Colony Ending: What is The Bio-Meter? Where Is It?

In the tribal camp, Blake tends after the man whom Tucker injured earlier. The hostile tribe has taken the bio-meter along with the other gadgets. She meets a friendly girl named Maila and asks her to retrieve the bio-meter, communicating with the help of drawings. The flood comes at night, and the tribe stays afloat in their ragtag boats. A militant group attacks the tribe in the coming day, assailing some and taking a handful as hostages, including Maila. The militants take the party to an abandoned ship, doubling as their colony.

Although hot-headed guard Paling is initially hostile, he comes to realize Blake’s Keplar roots looking at her pendant. He takes her to Gibson, a co-passenger of Blake’s father on Ulysses 1. The first mission is not entirely a failure, as there remain survivors. Blake urges Gibson to find the Bio-Meter since it is their only hope of survival. However, you may wonder what the bio-meter is. The gadget in question is an instrument to assess a Kepler’s ability to procreate. Blake must find the device to know if the Earth’s climate can reverse the effects of Kepler’s radiation and prepare the human body for procreation.

When Blake’s menstrual cycle begins in Gibson’s ship, we sense that the radiation has withered from her body. But Blake must find the device to make sure that she can procreate. As it happens, the bio-meter can double as a beaconing device when connected to the Henderson Hub, the climate station near the colony. However, we do not know the whereabouts of the bio-meter after leaving the Mud colony. Meanwhile, Gibson wants to prepare Maila as a Kepler. Later, Maila’s mother, Narvik, breaks into the ship to get her daughter back.

Gibson’s sidekick Paling holds Narvik captive, while Maila hides in the cabinet of Blake’s room. Gibson seems to know Narvik since she was a former guard in the ship who turned against the Kepler people. When Blake gives Gibson the idea of transmitting with the bio-meter, Gibson seems excited. However, as Blake deduces that the device is in the Mud colony, Gibson directs Paling and Blake to look for the device. However, shortly after they leave, Neil discovers a gadget hidden at the back of Maila’s doll. The bio-meter has been there all this while – and now, Gibson thinks of taking Neil to the Henderson Hub and becoming a Kepler legend.

Who Is The Father Of Neil? Is Gibson Dead or Alive?

The tense finale is acted out amidst the turbulent floodwaters. Blake gives Gibson the benefit of the doubt even as he holds Blake’s father hostage. She gradually comes to realize the flaws in Gibson’s militant ways. After taking Narvik hostage, Gibson plans to execute her the following morning. Blake cannot let that happen. Meanwhile, Maila escapes her dorm and hides in the cabinet of Blake. Paling comes to Blake’s room with the excuse to search the place and forces himself on her.

Blake kills Palling with the help of her Kepler pendant and leaves with Maila. She liberates the Mud hostages and goes to her father’s cabin to check upon him. He tells her that Earth indeed regenerates fertility, of which Neil is living proof. Neil is the son of Blake’s father, who gained back his fertility as he came to Earth. Blake’s father possibly fell in love with Munay, who conceived the baby. When Gibson imprisoned Blake’s father for staging an alleged uprising, he took Munay and Neil under his wing. In the meantime, Blake looks through the window to find Gibson taking Neil and Munay to the Henderson Hub.

Blake realizes that Gibson has the bio-meter and hurries to retrieve the gadget. However, she reaches the Hub to find Gibson in a psychotic state. He is desperate to send the signal to Kepler along with the proof that Earth brings back fertility. He urges Blake to drop her weapon, and shortly after, shoots Munay dead. Blake drops her gun only to jump into the water with Gibson. She attempts to choke him, and as the scene cuts back to the Mud boat, we do not get closure on Gibson’s fate. However, it seems that Gibson does not survive the underwater commotion and dies in the finality of events.

Does Earth Really Regenerate Fertility? Will Trees Ever Grow On Future Earth?

In a flashback sequence, Blake’s father shows her a tree specimen. As trees don’t grow on Kepler 209, the idea of a tree does not exist in the mind of a Kepler. Blake’s father tells her that trees were abundant on planet Earth until the humans plundered everything. As Blake and Tucker descend on the future Earth, we come to realize that the planet has been inhabitable for a while. Earth’s climate is wet and erratic instead of Kepler’s arid environment. There is a continuous ebb and flow of fog and flood, which endangers the possibilities of life.

While crabs, jellyfishes, and other saltwater creatures somehow manage, the human body is not cut out for living in a hostile environment. However, ironically enough, humans still survive and procreate in the barrenness of the Earth, while the radiation of Kepler 209 has taken away the human capacity to reproduce. In effect, it has eradicated the possibility of repopulating the alien planet, which is why they return in the first place. For the same reason, Gibson picks only underage Mud girls for confinement — to take them back to Kepler.

However, it seems that the Earth’s environment is ideal for reproduction. Shortly after her descent on Earth, Blake’s menstrual cycle starts. Blake’s father had the same fate, which gave birth to Neil. What about the trees, though? Can the future Earth foster tropical jungles? In finality, Neil asks Blake whether there will be any trees on Earth in the future. While Blake assures Neil, we can’t be so hopeful looking at the unpredictable climate. While Keplar finds hope for the future of humankind, Earth probably does not return to its initial state.