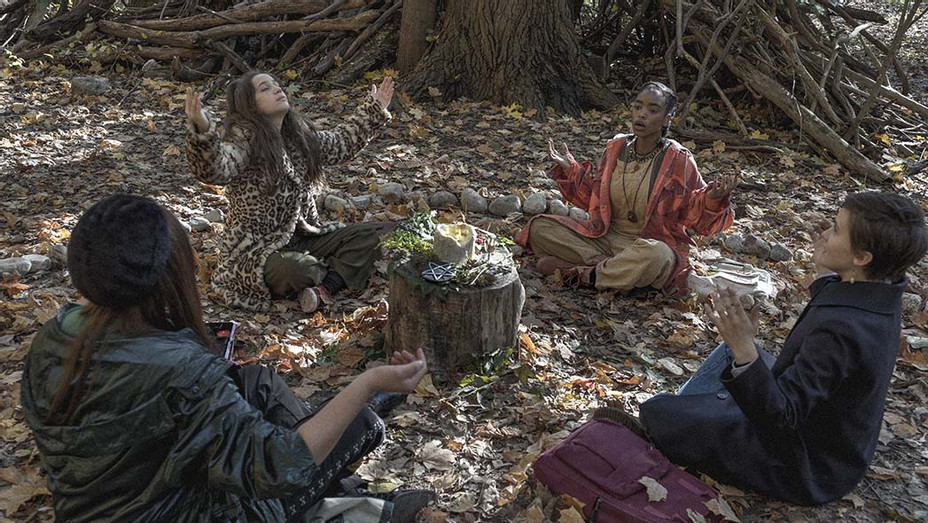 Writer-director Zoe Lister-Jones’s sophomore directorial venture takes the audience back to the world of ‘The Craft’, where socially outcast teenagers become powerful witches and start influencing the lives of those around them. When the original film came out in 1996, it received mixed reviews, although it was a modest box-office hit. Since then, however, the film has achieved cult status due to its imaginative exploration of gothic horror as a genre, sensitive representation of various social issues, and remarkable performances by all members of the main cast. Except for in the title, ‘The Craft: Legacy’ doesn’t expose its obvious connection to the original movie until very late in its runtime. Interestingly, this risky creative decision seems to work in its favor and gives the film an individual identity of its own. SPOILERS AHEAD.

Lilith “Lily” Schechner (Cailee Spaeny) moves to a sleepy town from New Jersey with her mother Helen (Michelle Monaghan), after the latter begins a relationship with motivational speaker Adam Harrison (David Duchovny). Adam has three sons, Abe (Julian Grey), Jacob (Charles Vandervaart), and Isaiah (Donald MacLean), and is a Jordan Peterson-type personality who advocates for the return of old-school masculinity.

At school, Lily has a traumatic experience after she has her period during a class. Her classmates, Frankie (Gideon Adlon), Tabby (Lovie Simone), and Lourdes (Zoey Luna) come to her rescue, and they become fast friends. After seeing an occult pendant on Lily’s necklace, the girls realize that she is meant to be their coven’s fourth member, whom they have been seeking for a long time. When Lily joins them, their circle becomes complete. They gain some incredible abilities, from stopping time to telepathically communicating with each other. They even put a hex on Timmy Andrews (Nicholas Galitzine), the boy who bullied Lily on her first day at school, and transforms him from a cruel jock into a kind and understanding ally who listens to Princess Nokia and reads Janet Mock.

The drastic changes in Timmy convince the girls that they can use their powers for good. Lily starts developing romantic feelings for this new version of her former tormentor. They persist even after she comes to know that he is actually attracted to Isaiah. Her subsequent act of casting a love spell on him is the only morally dubious thing that she does in the film. In the original, following the discovery of their powers, Sarah Bailey (Robin Tunney), Nancy Downs (Fairuza Balk), Bonnie Harper (Neve Campbell), and Rochelle Zimmerman (Rachel True) embark on a righteous crusade against everyone that has wronged them, but it soon takes a darker turn as they start to misuse their abilities and turn against one another.

In ‘Legacy’, when the three other girls are told that Timmy has committed suicide, their blame themselves as they believe that their magic has caused this. Their remorse is so immense that they give up on magic altogether. They even sever all ties with Lily after learning what she has done. While this gets retconned after it is revealed that Adam Harrison is behind Timmy’s death, it nonetheless helps Lister-Jones establish the inherent morality of her characters. She purposefully makes them near-impeccable, so in contrast, the action of their adversary will appear that much reprehensible.

From the moment he first appears on the screen, Adam’s forceful and domineering nature becomes an important subplot in the film. He has been a strict father to his three boys, a method of parenting that Lily finds to be terrifying. He has a very fanatical notion of who should have power and who shouldn’t and doesn’t consider Lily or her friends to be worthy of their abilities. He killed Timmy because he thought he was weak and doesn’t deserve to be part of his sons’ lives. Adam embodies the very things he preaches, the masculine entitlement.

When Timmy’s ghost informs Frankie, Tabby, and Lourdes about the nature of his death and who is behind it, the girls realize that they have been unfair to Lily and rush to her help. Individually, they are no match for Adam, who is a much more experienced magic-user. It is only by working together that they defeat him. The battle underscores the importance of unity in the face of what might seem like overwhelming odds, be it an all-powerful warlock or the patriarchal society.

There are hints sprinkled throughout the film about Lily’s possible ancestry. She eventually learns that Helen adopted her. In the closing scenes, she travels to a mental facility to meet her birth mother, making it quite easy for us to guess who she is even before her first screen appearance. There is only one character who was institutionalized at the end of the original film, Nancy. She hasn’t changed much since the last time we saw her. Although there are obvious signs of aging, she is still immaculately dressed as ever in gothic attire. However, it seems that her time in the mental facility has made her more reserved and retrospective.

When Nancy let Helen adopt Lily, she made sure that her daughter will never learn about her real identity, believing that it will protect the child from her enemies. Now, with Lily at her doorstep, Nancy realizes that her plan hasn’t worked. And she is right. Adam knew exactly who Lily’s real mother is and came after her because of it. While he was ultimately destroyed, the world has other warlocks as well as other types of adversaries. It seems that Nancy has to take a more active role in her daughter’s upbringing if she wants to keep her safe.