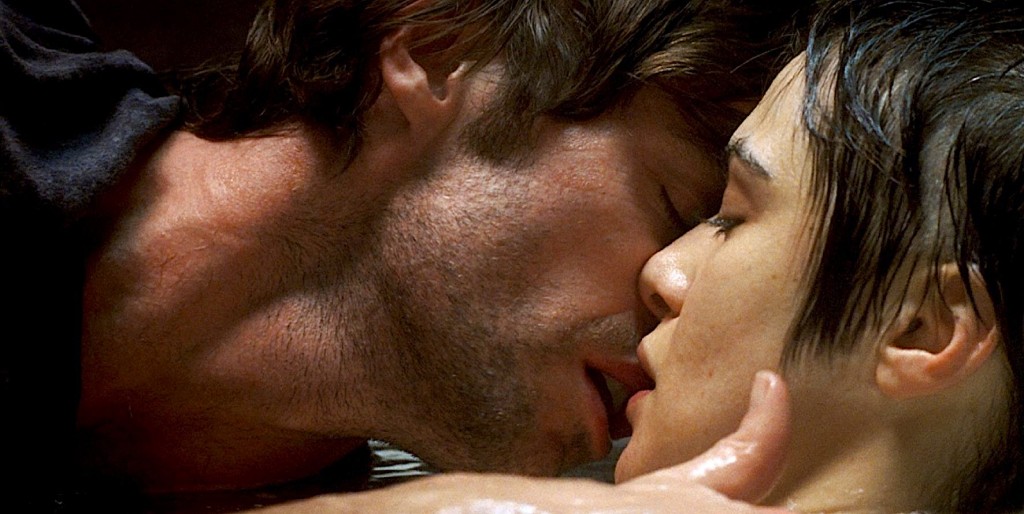 There are some movie experiences that awe you, some make you think; some make you bow at the sheer brilliance of them, while some may evoke a melancholy strain. ‘The Fountain’, does all that and more. Darren Aronofsky’s 2006 epic-fantasy-science fiction-romantic drama (If you have watched the film, you will agree it is hard to put it under a single genre), divided critics and polarised viewers, and has continued to do so eleven years hence, even after having gained a cult following. Love it or hate it, you can’t deny that ‘The Fountain’ is a transcendent movie-watching experience.

Like Aronofsky’s other films, ‘The Fountain’ too deals with complex psychological themes, and is a hard film to watch, but one that is extremely rewarding as we approach the end. Incidentally so, that is exactly what the film deftly sets out to address, The End. The film deals with man’s mortality, his feeble attempts to overcome it, maim it, or in ways change or delay the obvious outcome that accompanies birth, and his eventual coming to terms with it. If anything, Aronofsky’s work here feels like a romantic ode to the dichotomous cycle of death and birth, stressing it in ways, to be necessary to be replaced by the new order of things. “Death, as an act of creation”, as remarked by one of the protagonists in the film; “omnis cellula e cellula”, proposed by the physicist Rudolph Virchow (meaning all cells come from cells) and penned and interpreted by John Green as “life comes from life” in his novel, ‘The Fault in our Stars’, are important and overarching themes in Aronofsky’s film. 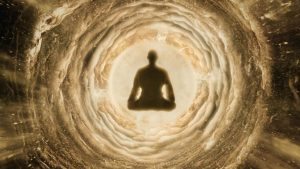 For all its commentary on life, death, what precedes it and what may follow, it is a hard film to indulge in, also given its non-linear narrative and its tendency to throw another curveball at you the moment you start to make sense of the already limited information Aronofsky presents on-screen. Although, as stated by Aronofsky himself, the film is like a ‘Rubik’s Cube’. It may be solved and interpreted differently, but he ultimately believed the solution or result achieved in the end to be the same. Here, I offer up a narrative breakdown and my interpretation of this deeply complex yet enriching film. Read on!

The film employs three different, albeit somewhat related, congruous narratives to address its themes of man’s mortality and his ways of dealing with it, each separated by a gap of five centuries, popularly translated as the past, present and future. As stated, some of the audience may perceive the events to be occurring in a timeline of sorts, but again, that is completely open to interpretation. 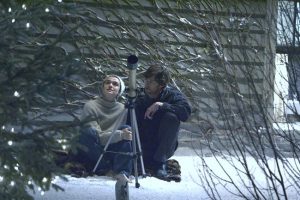 In the modern day (21st Century), neuroscientist Tom Creo (Hugh Jackman) wrestles with time to find a cure for his wife’s terminal disease using samples found from an old growth tree in Central America, a reference to the biblical ‘Tree of Life’. He tests these samples on an unassuming monkey only to record some progress but not being completely able to eliminate the tumor. His wife, Izzi Creo (Rachel Weisz) on the other hand, realises that her days are limited, and chooses to go out with grace, gradually coming to terms with it, and trying to spend her last days with her husband. Tom however, refuses to accept that she may be no more and struggles to find a cure not only for her, but for death itself, calling it a “sickness” like any other that needed to be cured. In one of the many beautifully realised scenes in the film, Izzi and Tom sit out stargazing, when Izzi tells Tom about ‘Xibalba’, a nebula wrapped around a dying star, described to be the Mayans’ underworld, “a place where the dead go to be reborn”, and that she was writing a book about it. Through this analogy and the analogy of a dying star going supernova to give birth to a new star, Izzi tries to make Tom realise the inevitability of her death, even indicating that they’ll live forever when they meet in the afterlife; that is, the possibility of life after death, the possibility that a person may live on even after death, in one manifestation or another. 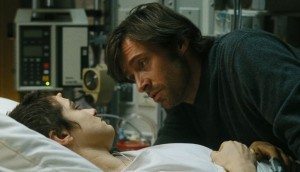 Every scene, every exchange of dialogue that happens between Izzi and Tom in the ‘present’ scenario is replete with heavy symbolism, also providing plot points for the other two narratives. After collapsing at a museum, Izzi tells Tom the story of her Mayan guide who planted a seed over his dead father’s grave, allowing him to live on after his death. “Death was his road to awe”, she says, resolutely telling Tom that she wasn’t scared anymore of her death, and that he shouldn’t be either. Having already told Tom about her book featuring the story of the Spanish Conquistador on a quest to find the biblical Fountain of Youth, she asks Tom to “finish it” for her as a final behest, gifting him a pen and ink set for the same. While Tom is in denial and refuses to finish the book saying he doesn’t know the end to it, Izzi reassures him, saying that he will. In many ways, Izzi’s parting gift to her husband was to help him come to terms with her death, while Izzi hoped to live on through the book, through her incomplete work. 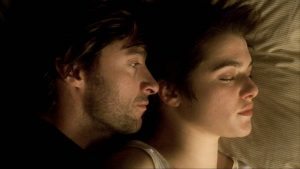 Ironically enough, Tom receives the news of his wife’s passing just moments after he discovers he has made a breakthrough in his search for a cure. Aronofsky succeeds in driving the message home here, but alas, does so while reducing both Tom and the viewer to an incomprehensible mess of tears and melancholy. In one of the most heartbreaking scenes put to film in my opinion, Tom makes an impression of his lost wedding ring on his finger where it used to be, using the pen and ink Izzi left him, as a reminder. Also, through the recurring scene where Tom bluntly refuses to go out for a walk with Izzi to enjoy the first snow, denying her of a simple pleasure she seeks in her final days, Aronofsky tries to express the cycle of regret that Tom goes through for not having spent enough time with his ailing wife, eventually grieving his way to the bitter realisation and coming to terms with it, when he plants a sweetgum seed in her grave that she gave him in an apparition from the ending of the ‘future’ storyline. 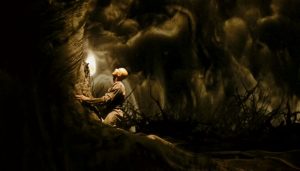 The ‘future’ storyline, may be interpreted in two different yet uniquely engaging and satiating ways. It could be a story of the 26th century, 500 years hence the ‘present’ timeline, where Tommy, the space traveller makes his journey to Xibalba in a biosphere bubble (see it to believe it) of sorts, the sphere containing the ‘tree of life’ or in terms of the continuity storyline, the tree he seeded over Izzi’s grave, supported by the fact that Izzi (or her apparitions) repeatedly appear, asking Tommy to “finish it”. The second theory suggests that it all may be a manifestation of ‘present’ Tom’s mind, an abstract existence, where the tree signifies Izzi, and his journey to Xibalba in the hopes that she would be given back to him, similar to his struggle in the ‘real’ world for finding a cure for her. 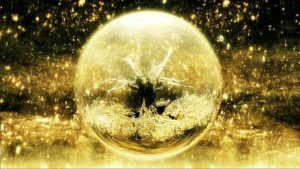 The tree, however, dies just before the biosphere ship reaches Xibalba, (much like Izzi’s sudden death as Tom approaches a cure) and upon finally accepting his impending fate, and being persuaded by Izzi to “finish it”, he lets go right before the star goes supernova and achieves a sort of nirvanic state, bursting out of his ship and being absorbed by the dying star. The tree then flourishes back to life, another manifestation of Izzi’s “life after death” belief. Izzi is shown picking a sweetgum from the tree, and handing it over to ‘present’ Tom, who then plants it in her grave as an act of acceptance, (as told above) bidding her a hearty farewell. 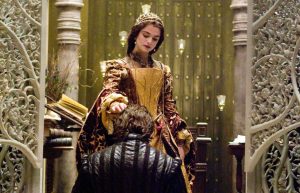 In 16th century Spain, Tomás the conquistador is commissioned by Queen Isabella to find the biblical Fountain of Youth, and alongside it, the Tree of Life, convinced that drinking its elixir would grant her immortality and help her defeat the Inquisitor threatening her reign. A loyal Tomás sets out on the journey, promised by his queen that she shall be his Eve when he returns, and both of them will spend an eternity together, also giving him a ring to remind him of his promise. Upon reaching its supposed location, a mayan pyramid, Tomás engages in combat with a group of pagans, is overpowered, and directed to the top of the pyramid where he meets a mayan priest with a flaming sword. The priest attacks him, and just as he is about to deliver a final blow to Tomás, the scene cuts, and we are repeatedly shown the same sequence time and again, expressing the state of denial Tom (in the ‘present’ storyline) is, with regard to Izzi’s death, showing his inability to finish the story. It is only when Tommy from the ‘future’ storyline finally accepts his impending death and the death of his beloved by making a leap towards Xibalba, that we are shown a conclusion to the scene in question. 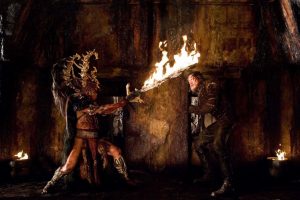 A nirvanic apparition of ‘future’ Tommy appears in front of the priest, who recognises him as the “First Father” and offers to sacrifice himself, to be set on the road to awe. Tomás does so, slitting his throat and proceeding towards the tree of life, applying its sap on his wounds, astonished to see them cured in an instant. He greedily drinks the sap in the hope of immortality, which is somewhat rejected by Tomás’ body, making plants spring out from his torso, gradually covering him completely and making him a ‘part’ of the tree of life. In a fulfilment of the mayan theory, he quite literally gives rise to new life. Rightly so, this is how ‘present’ Tom chooses to end Izzi’s incomplete story, safe to say that the ending comes to him only when he truly comes to terms with her death, understanding in the process, what she meant when she called Death, a road to awe. 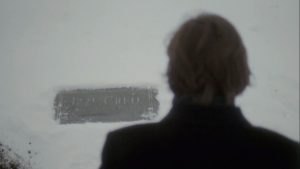 Having said all of that, I do accept that ”The Fountain” is an impossible film to fully understand or explain. For all its interpretations and theories, it remains an experience to be cherished by every cinephile, for it is embellished with such intricacies that may be discovered, and the experience of it made even more visceral on multiple viewings. For all we may make out of this, or what Aronofsky wanted to portray (seldom actually commenting on how he intended the film to be viewed as) ‘The Fountain’ could be the tale of Tommy’s realisation of the true nature of death over three lives, or a manifestation of the same story in three different ages, of man’s initial resistance, denial and subsequent acceptance, offering multiple and unique interpretations, and therein lies the beauty of Aronofski’s underrated gem of a film.