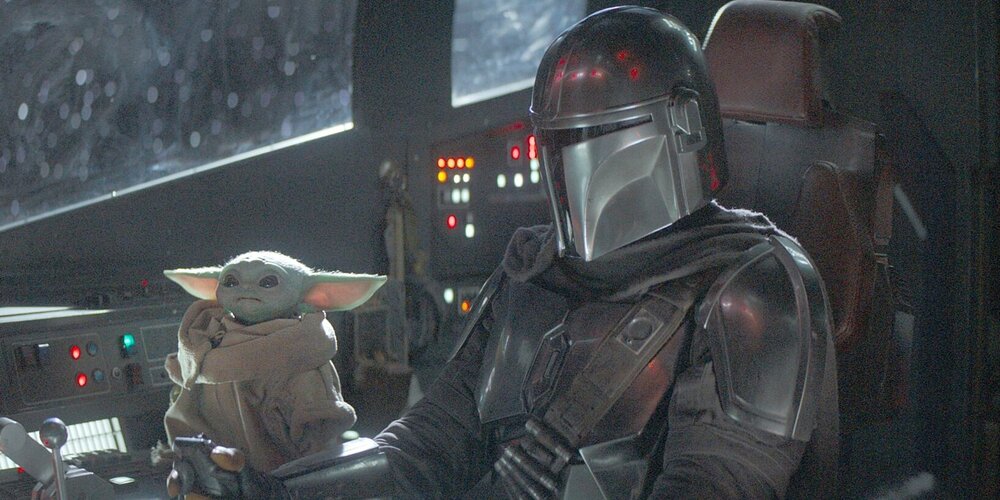 ‘The Mandalorian’ season 2 finale made ‘Star Wars’ fans cry actual tears of excitement when it brought back one of the most iconic characters from the original films to do a cameo. But we will get to that in a bit. The season finale – ‘The Mandalorian’ season 2 episode 8 ‘Chapter 16: The Rescue’ – packs a high-octane, action-filled 43 minutes, giving fans much to think about. The second season culminates in a daring rescue, some terrific Mando fight scenes, and an emotional farewell. Let’s give you a short recap of the season highlights, followed by some more insight into the ending.

Most of ‘The Mandalorian’ season 2 is all about Mando trying to find other Jedi to hand over The Child to so that he can be trained among his own kind. To point him in the direction of others of the Jedi Order, Mando first needs to find more of his own kind – Mandalorians, that is. His plan is to tap into the Mandalorians’ network and figure out where to find the nearest Jedi. His quest takes him to Bo-Katan Kryze, the heir-apparent to the throne of Mandalore.

She is apparently after Moff Gideon, or rather the Darksaber he carries. Bo Katan tells Mando where he can find Ahsoka Tano, former Jedi Padawan of Anakin Skywalker. When he meets Tano, she figures that the Child is strong with the Force but is largely untrained, and his connection to Mando makes him not-the-most-suitable for Jedi training.

She believes it’s best to let the Child’s powers fade away because if trained in the ways of the Force, he stands at the risk of turning dark owing to his deep emotional bond with Mando. While refusing to train the Child (whose name we learn is Grogu) herself, Tano nevertheless instructs Mando to take him to an ancient Jedi temple on the planet Tython. Once there, Grogu can reach out to the other Jedi using the Force, and someone from the Jedi Order will come for him.

On Tython, things go sideways as Grogu makes a Force-powered phone call, and Mando is unable to save him when he gets kidnapped by the Dark Troopers sent by Moff Gideon. Mando’s ship is destroyed, but he finds a way to rescue Grogu, putting together a ragtag team of fighters (Boba Fett, Fennec Shand, and Cara Dune). The group is able to procure the coordinates leading to Moff Gideon’s light cruiser, but they need more muscle to pull off the daring rescue. 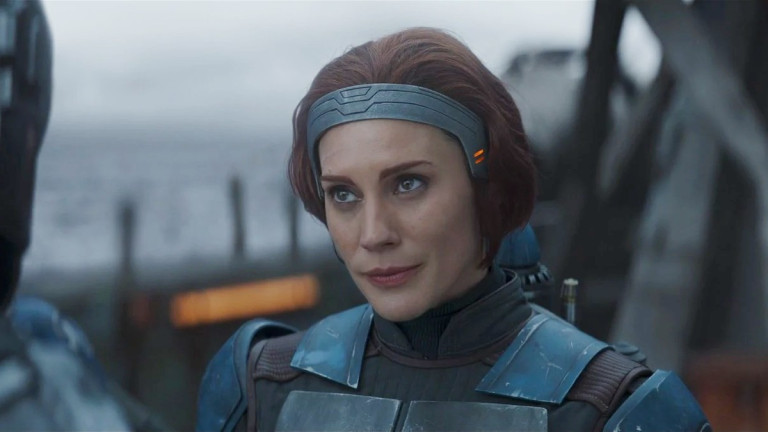 Mando recruits the help of Bo-Katan and her sidekick Koska. Bo-Katan wants to take back her weapon, the Darksaber, which Moff Gideon had stolen from her. Apparently, it’s a powerful weapon that’s important for her to restore if she wants to have any hope of ever taking back Mandalore. Mando is only interested in getting back Grogu, so he agrees to let Bo-Katan have Moff. Once they capture Dr. Pershing, and he croaks about the floor plan of the Imperial light cruiser, telling them where Grogu’s holding cell would be and where the Dark Troopers are stationed, Mando and Co. formulate a solid plan.

They “Trojan Horse” their way onto Gideon’s cruiser, and the girl squad – Bo-Katan, Koska, Fennec, and Dune – blast their way through hordes of Stormtroopers (who are as useless as ever) as Mando sneaks in to rescue the baby. When Bo-Katan and the party reach the bridge of the spaceship, killing everyone in their wake, they are surprised to find that Gideon is not there.

After a brief but harrowing fight with one of the Dark Troopers, who are more like the T-800 from ‘The Terminator’ (relentless and scary), Mando manages to reach Grogu’s cell, only to find Moff Gideon inside, pointing the Darksaber at the baby. After a bit of chitchat, during which the Moff reveals that he has no further use for Grogu since he has already taken the child’s blood for his M-count experiments, Gideon attacks Mando. Now, pure beskar is the only material that the Darksaber cannot cut through. So obviously, Mando easily wins the fight and overpowers Gideon. When he brings Gideon back to the bridge where Bo-Katan is waiting, she is not very happy to see the Darksaber in Mando’s hands.

The Throne of Mandalore

Gideon explains, with an evil laugh, that only the person who wields the Darksaber can lay a legit claim to the throne of Mandalore. That’s the whole reason Bo-Katan was after the weapon so earnestly. Mando immediately offers it to her, saying that he’s yielding it to her willingly, but it doesn’t work that way. The Darksaber’s ownership can only be won through combat. So now, Bo-Katan will have to defeat Mando (or Din Djarin) in combat to gain ownership of the powerful weapon.

But that’s a problem for another day, another season. For now, Mando retains the Darksaber, which means he now has a claim to the throne of Mandalore, something he has never shown the slightest interest in. Is it Din Djarin’s destiny – to take back Mandalore and rule over it? Unlikely, given how our hero likes to operate alone and a King is anything but alone. However, we can expect this storyline to be a focal point in the next season.

The scary battalion of Dark Troopers is back and banging on the door while the group inside gets ready for a potentially fatal showdown. Just then, a lone X-wing enters the cruiser, and out comes a robed figure who slices their way through the demonic droid fighters with a green lightsaber. For those who have seen the original ‘Star Wars’ trilogy, this is an “aha” moment as they recognize the green lightsaber and the gloved hand. 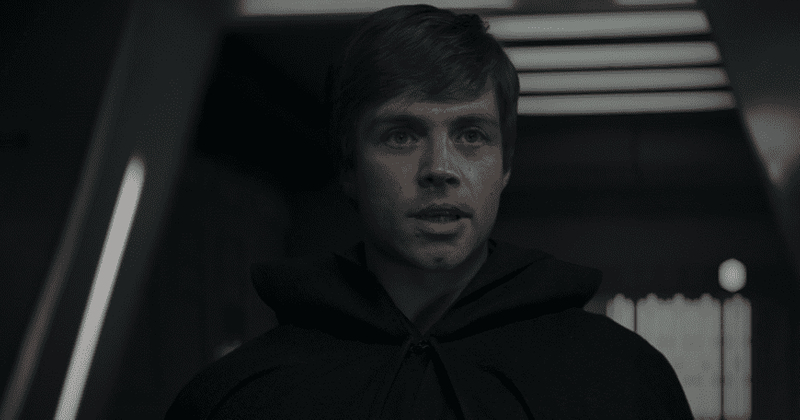 For those who just follow ‘The Mandalorian,’ it’s still pretty epic the way the Jedi warrior easily cuts through rows and rows of Dark Troopers to reach the doors of the bridge. Grogu watches the monitor screen transfixed and Mando, sensing Grogu’s interest, opens the door. And it’s none other than Luke Skywalker himself who walks in and lowers his hood! Luke Skywalker (Mark Hamill cleverly de-aged by CGI) is answering Grogu’s Force-powered phone call and has come to collect him. Mando has no clue who Luke is and how important he is to the ‘Star Wars’ story, so he casually asks, “Are you a Jedi?”

Luke tells him yes and also assures him that he will give his life to keep the child safe and train him. Powers without training are no use, says the powerful Jedi, gauging correctly that the Force is strong with Grogu. Mando convinces Grogu to go with Luke and be a Jedi, promising to see him again. In a heartwrenching moment that teared up many, Din Djarin removes his beskar helmet and lets Grogu see his face for the first time. They say goodbye to each other, and Mando watches tearfully as Luke, accompanied by a bleeping R2D2, takes Grogu away.

Baby Yoda and The Mandalorian

The episode ends with Grogu and Mando parting ways (save for a post-credits scene). But does this mean it’s the end of their beautiful, sweet partnership? Or will Jon Favreau and Dave Filoni find a way to reunite the duo who has touched so many hearts? Mando did promise the kid that he will see him again. One can only hope that he makes good on his promise in the next season. Because really, the relationship between Mando and Baby Yoda is what keeps the audiences hooked. 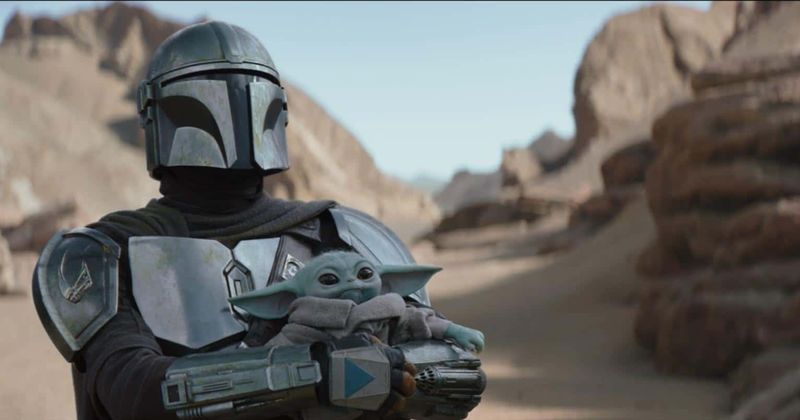 The story of a lone bounty hunter, who has no emotional connections whatsoever, finding and raising a baby who he grows to love immensely… now that’s a story worth telling. Who wants to see the show if there’s no Baby Yoda cutely cooing away in it? Not us. So we’re hoping against hope that this is not the end of Baby Yoda and Mando!

The Book of Boba Fett

That brings us to the little post-credits scene at the end. Back on Tatooine, inside Jabba the Hutt’s old lair, Jabba’s Twi’lek majordomo Bib Fortuna has taken over as the crime lord. Fennec Shand bursts in and frees Fortuna’s slaves, as Boba Fett walks in and kills Fortuna. He casually goes over and sits on Jabba’s former throne. A caption on the screen tells us that ‘The Book of Boba Fett’ will release in December 2021. 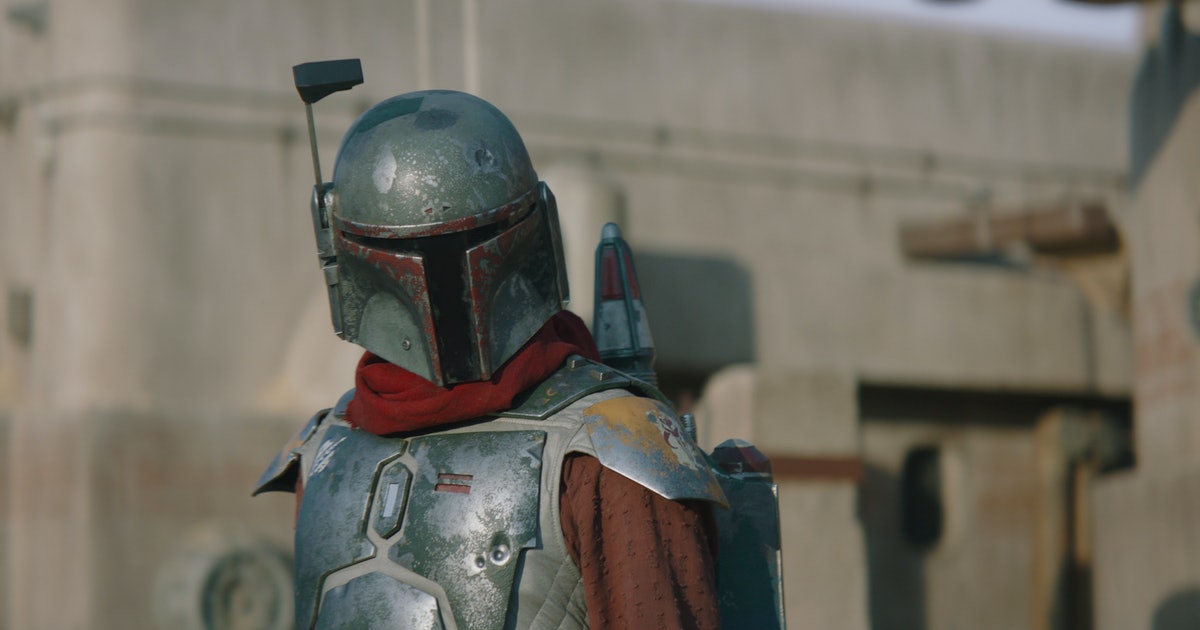 Fans are divided between whether ‘The Book of Boba Fett’ is a new spin-off series or just a tease for ‘The Mandalorian’s’ third season. Honestly, it could be either. There has been no official announcement from Disney about a new Boba Fett series, but they could be making a statement anytime now. As of now, it’s not clear if the post-credits scene teases a new show or the next season.