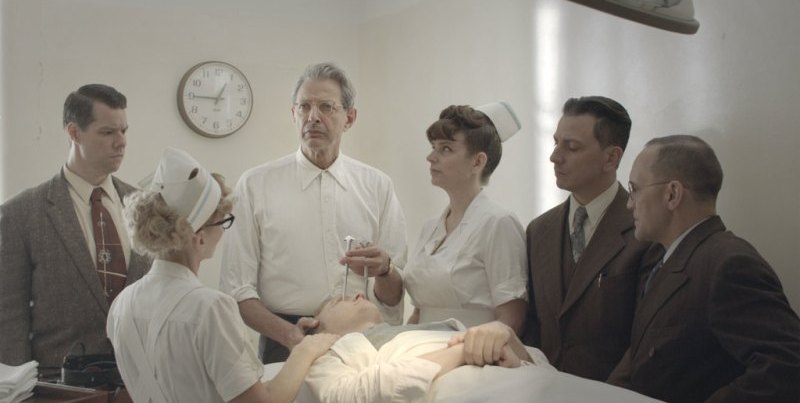 Distributor Kino Lorber has released the official trailer for ‘The Mountain,’ starring Jeff Goldblum and Tye Sheridan. The hypnotic first look gives a glimpse of the shades of Goldblum’s character, the Doctor, which is based on the controversial figure, Dr. Walter Freeman. He gained notoriety for carrying out thousands of lobotomies on his patients. Sheridan plays his young travelling companion Andy. The movie is directed by Rick Alverson from a screenplay he co-wrote with Colm O’Leary.

“I’m about to go out on the road,” says Goldblum’s doctor in the trailer. “You know what I could use? Somebody to give me a hand, taking photos,” he adds. But the trailer hints that it’s not just taking photos but lobotomies and shock therapy on his patients, or “people in distress.” The doctor moves along the thin line that separating innovation and insanity when jamming metal rods into his patients’ brains through their eyes. Andy, who lost his mother and was raised by an emotionally stunted father, hides simmering wrath under his seemingly calm demeanor in the trailer. It becomes an intriguing token to a premise that is very slippery and unpredictable.

According to the official synopsis, the plot is set in the ’50s and follows the young and introvert photographer Andy, played by Sheridan. He joins the renowned lobotomist, played by Goldblum, in a mission to recoup the doctor’s abandoned dream project. But as he becomes intimate with the doctor’s subjects, the “people in distress,” he increasingly identifies with them. Moreover, he develops feelings for the rebellious woman, played by Hannah Gross, in the asylum.

The other cast includes Denis Lavant, Udo Kier, and Hannah Gross. ‘The Mountain’ is director Alverson’s follow-up to ‘Entertainment’ and ‘The Comedy.’ The movie is produced by Sara Murphy, Ryan Zacarias, Allison Rose Carter, and Eddy Moretti. Kino Lorber has acquired the North American rights to the movie, which had its world premiere at the Venice International Film Festival, earlier this year. The movie had its North American premiere in Sundance’s Spotlight sidebar.

“The Mountain is a peak cinematic experience, and that’s no pun. Rick Alverson, a transcendent indie auteur we’ve wanted to work with for a long time, crystallizes his visionary script onscreen with surgical direction and an exceptional cast,” Kino Lorber president Richard Lorber said after announcing the acquisition in January. “Jeff Goldblum is brilliantly attuned to Rick’s mischievous mission and is guaranteed to cast a spell on viewers. We can’t wait for the Sundance Spotlight on this soaring allegory and look forward to unveiling it to bold North Americans who will have never seen anything quite like it,” he added.

Check out the official trailer of ‘The Mountain’ below.