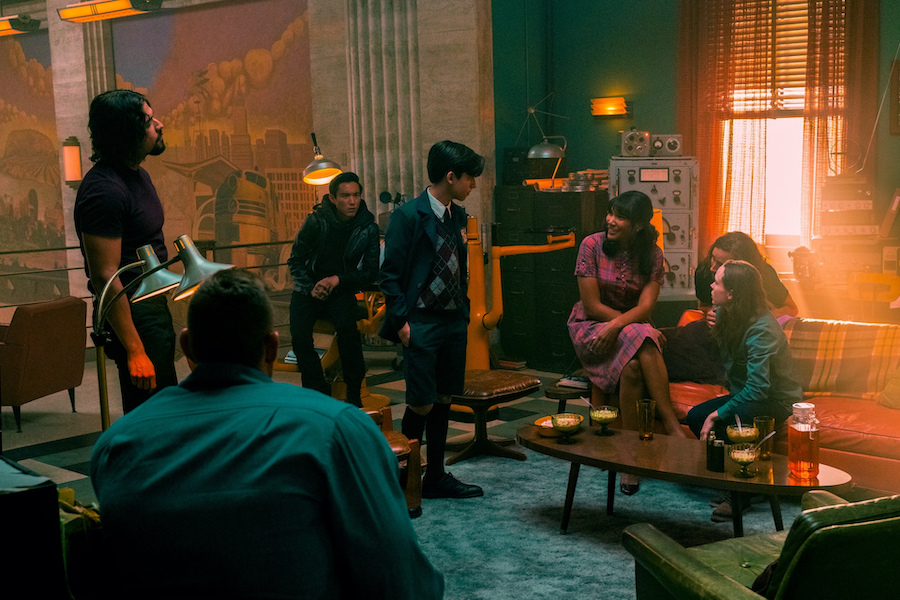 The element of time travel in any story adds several dimensions to a plot. The going back and forth in time and the effect of this travel on the chain of events has always been the most important factor in such stories. In its eighth episode, ‘The Umbrella Academy’ Season 2 brings a couple of such plot devices into use and also sets the ground for the surprises that are bound to follow the actions of the Hargreeves siblings. For now, the focus is entirely on surviving the apocalypse and their chances remain dismal as ever.

Diego is brought into the Commission headquarters by Lila, who offers him employment. The Handler expresses some concern over bringing Five’s brother into the inner circle and wonders how long it will take before he pokes around and makes a run for it. While Lila expresses her confidence in Diego, he soon finds the things that interest him the most. He ends up at the place where he gets to witness the events of the assassination. His motive was to figure out how his father is involved in the act, but it turns out that there is something else that he and his siblings should be worried about.

While trying to run away with Sissy and Harlan, Vanya is attacked by the cops and finds herself in the captivity of the FBI. She is interrogated on the basis of being a Russian, who came to the States to further the communist propaganda. Soon enough, they discover that she has powers, but are yet to witness the full scale of it. This event confirms the origins of the apocalypse. Luther had been right in wondering if it is Vanya whom the apocalypse has followed into the 1963 timeline. And again, we find her in a position similar to the one she had been at the end of the first season. On both occasions, she had been held captive and was tortured in one way or another.

Eventually, she had to use her powers to free herself, but could not control it beyond that. The difference is that the last time, her siblings came to know about it pretty late and they had a very flawed approach of solving her problem in the first place. This time, Diego knows what’s going to happen and hence is better equipped to help his sister, as well as the world. We also find Vanya connected to Harlan while losing control of her powers. As suspected, she had transferred something over to him and now that she is on her way to triggering the apocalypse, Harlan, too, is feeling the brunt of it.

While the wheels of fate turn to restart the apocalypse, Five comes up with another way to save himself and his family. He knows that time jumping is out of the question, considering how he screwed it up both times. His deal with the Handler was supposed to be their way out, but due to her betrayal, he couldn’t go forward with it. The only way that he can get another briefcase now is to get it from himself. Going back to the first season, we recall that before coming back to the 2019 timeline, Five had been in 1963, the day of the Kennedy assassination. At that time, he also had the Commission briefcase, but he didn’t need it to go back to 2019 because he had used his own powers. This means there is one free briefcase that Five can use in the current situation. This means he would have to meet his two weeks younger self again, but that comes with complications of its own.

The paradox can’t allow two people to be at the same place at the same time, so some side effects start to appear when one tries this. However, there is another, and perhaps, bigger problem- Five, himself. He will have to convince himself, the most mistrusting, obstinate, and used to his own ways person. To tackle himself, Five takes Luther as backup, and while suffering from the side effects, they try to figure out a way to not kill Five’s past self, allowing the events to happen as they were, and also getting the briefcase. Despite all his efforts, all the things that can go wrong do go wrong, and Five, Luther, and their siblings are forced to confront the apocalypse once again.