TIFF Review: ‘The Wife’ Has Glen Close at Her Best 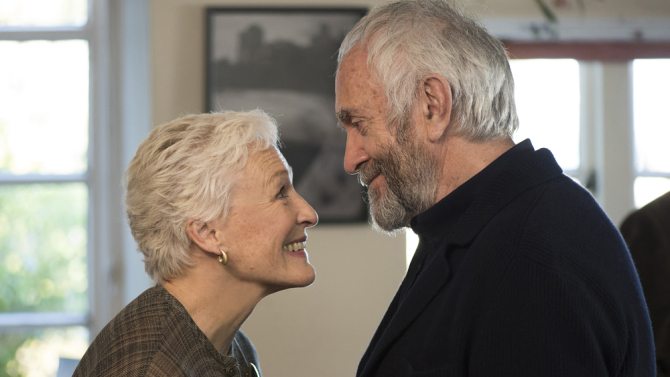 Glenn Close was among the dominant forces in American acting in the eighties, beginning with fine supporting work, moving to leads where she was astounding. Early in her career she was cast as a Mother Earth type in a The World According to Garp (1982), The Big Chill (1983) and The Natural (1984) earning Oscar nods for supporting actress in all three. Cast against type in Fatal Attraction (1987) she became the scorned woman from hell, in frankly he most sexual performance of her career. One year later she topped that performance in Dangerous Liaisons (1988) as a cruel, vicious woman manipulating the lives of others.

She slipped away to the stage and television after that, bouncing back with a lovely Oscar nominated performance in Albert Nobbs (2011) for which she was again nominated for an Oscar.

She gives what is easily one of her finest performance in The Wife, a small film from the UK and Sweden that allows the actress to shine. As the shy, retreating wife of a world famous writer, she is holding back years of resentment over his past indiscretions. When Joan is suddenly in the spotlight, threatening to have family secrets exposed, she finally explodes, allowing her years long face of calm to fall apart.

Close is extraordinary in the film, portraying a role many women must identify with! We can see the quiet tension building when a biographer shows up threatening to expose raw secrets she had put to rest. Now exposed they are like raw, fresh cut nerves. An exceptional piece of work that demands attention. Jonathan Pryce is very good as her famous husband, while Christian Slater is professional with an edge of sleaze as the writer.

Close is the attraction here, beautifully directed by Bjorn Range in a fierce, quietly devastating performance in which she seethes.