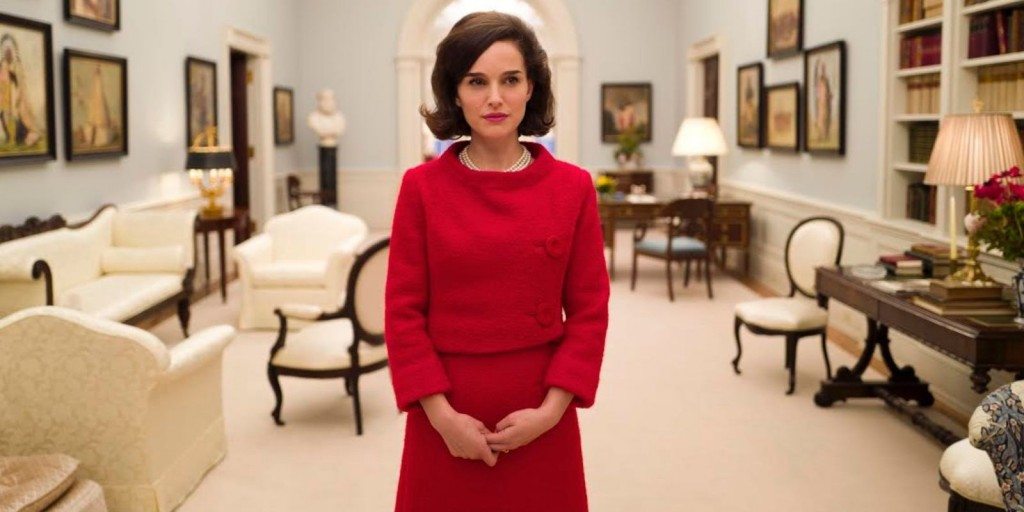 Let me state here and now that with her brilliant, courageous and superb performance as Jackie Kennedy in Jackie, Oscar winner Natalie Portman becomes the absolute frontrunner for the Academy Award as Best Actress. She gives a galvanizing portrait of a First Lady torn apart by grief, horrified by what happened to her husband just inches from her, and wanting to preserve his legacy before they climb over his coffin into the Oval Office. It is one of the most remarkable performances I have seen in the recent years and  the finest work of Portman’s career.

The film takes place a week after the Kennedy assassination when a reporter is sent to interview her hoping to get the truth of how she feels, and how she is coping. Frail, guarded, nearly overwhelmed with grief and a sense of loss yet simmering with outrage at what was done to her family, she speaks the truth to him, though makes it clear he will not be permitted to use all of it, that she will not give them. She details the nightmare of the assassination, of his head exploding blood and brains onto her, his body slumping down into her lap where she tried feverishly to stop the blood and put the shattered skull back together. She talks of the frightening ride to the hospital, of wiping the blood and brains off her face after her husband was pronounced dead, and Johnson was sworn in, and she talks candidly about the funeral and the fight to honor JFK properly.

Sometimes quaking with anguish, knowing she is sharing her own grief with the entire country, possibly the world, she does her best to hold things together for her children. But in her private moments, and remember she was intensely private,  she allows her emotions to come over her and feels the pain, the hurt, the deep sense of loss.

It is a shattering performance of startling realism that strokes the soul of anyone watching. Portman nails every aspect of Jackie, from the speech pattern, the awkward movements when on TV, through to the ferocious mother who would protect her children at all costs.

Peter Saarsgard is Bobby Kennedy and rather muted, though he does allow us to see the caustic side of Bobby, who was openly devastated by his brothers shooting and had himself just another five years to live. I was surprised he made no effort to bring to the part that pronounced Kennedy accent, choosing instead to capture the hurt of the character and the nastiness Bobby was known for.

In every way this is Portman’s film and the gifted actress we have watch grow up on-screen does the finest work of her career in her most challenging role. Breathtaking.