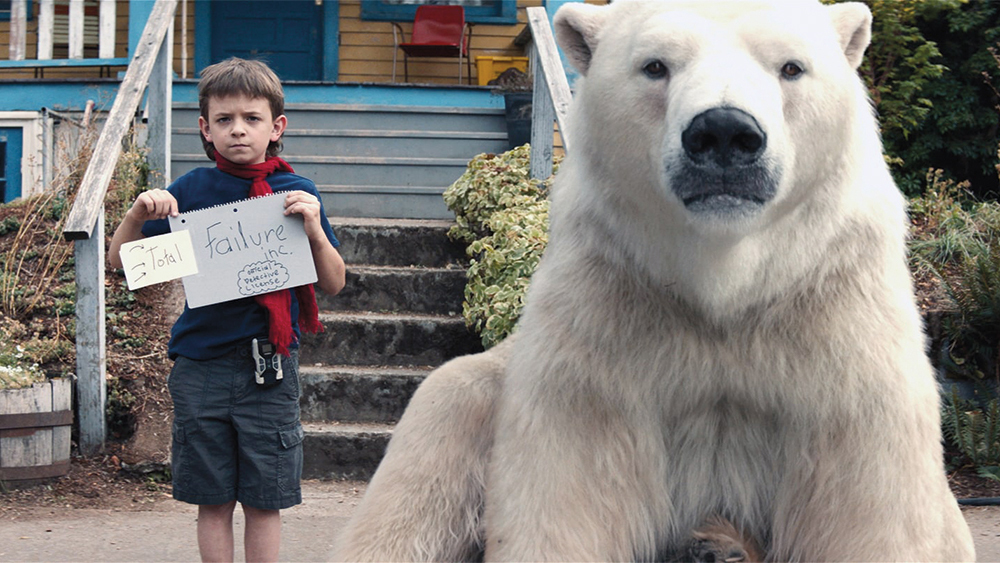 Disney seems to have a monopoly on heartwarming, life-affirming movies and this is just re-inforced with ‘Timmy Failure: Mistakes Were Made.’ The Disney+ movie is yet another quality adaptation of a fantastical story that manages to transfer the magic on screen.

‘Timmy Failure: Mistakes Were Made’ was described as the best original production to be made available on Disney+ by a wide margin when it was released. In the context of the success of ‘The Mandalorian,’ that was a big compliment. Plus, it was an even bigger accomplishment for Disney since it proved that their staple genre had not died out in terms of appeal in this age of streaming.

To begin with, the children’s movie instantly transports viewers to its world: one that plays out like a kid’s fantasy in Portland aesthetic. Timmy Failure is an eleven-year-old boy who refuses to bow down to the implications of his name. In fact, he seeks to reverse its connotations and his confidence in doing so is truly infectious.

Timmy thinks that he is the best detective in town and runs an agency that he calls Total Failure Inc.: an amalgamation of his name and that of his imaginary companion, Total. Total is a 1500-pound polar bear that only exists in Timmy’s imagination but serves the larger purpose of advancing the story’s surreal nature.

Many of you might be wondering where was ‘Timmy Failure: Mistakes Were Made’ filmed. Well, the setting is definitely Portland, Oregon but its one that is effectively candy-coated with the Disney tone. So, is the film actually shot in Portland? Or have the makers used another location and passed it off as Portland? Continue reading to find out.

Yep, ‘Timmy Failure: Mistakes Were Made’ has actually been filmed in Portland, Oregon. The movie embraces its setting with open arms and there could not have been any compromises along that front. The setting plays a crucial role in the movie and functions as if it were another character.

To begin with, Timmy lives in a house that perpetually stays under the shadow of a large water tower. According to local sources, the water tower is actually located in the Overlook Neighbourhood in North Portland. The Beach Elementary School is also visible in the background.

Moreover, filming was also carried out on the North Going Street pedestrian bridge and the Concord-Failing-Overlook painted intersection. Additionally, Hawthorne Bridge was also a location at which the movie had been filmed. While filming on Hawthorne Bridge, the producers had to close all the lanes between Southwest First Avenue and Southeast Grand Avenue for six hours.

Furthermore, according to Disney’s official fan club, D23, filming at a certain park required a large number of extras. However, instead of being challenging, the festive atmosphere had made the shooting quite fun. In fact, the weather had been slightly unsupportive that day and the fact that filming proceeded with excitement as opposed to logistical difficulties had been commendable.

Now, the actual location of this park has not been mentioned. However, it is revealed that the shooting took place at a park near the iconic St. John’s Bridge. Hence, in all probability, that scene had been filmed at Cathedral City Park. However, that is just speculation and an educated guess. The actual location might have been different.

Moreover, filming for ‘Timmy Failure’ was also carried out in Vancouver in British Columbia, Canada. According to local sources, one of the places in Vancouver where filming had been carried out is the Cloverdale Fairgrounds. This is the place where the iconic scene involving Timmy driving a car through a house had been filmed.

Timmy Failure is filming today at the #Cloverdale fairgrounds. Crew member told me that they’re filming a scene here where a vehicle goes through a house. Right now they’re setting up huge green screens. pic.twitter.com/IAA3G4Txco