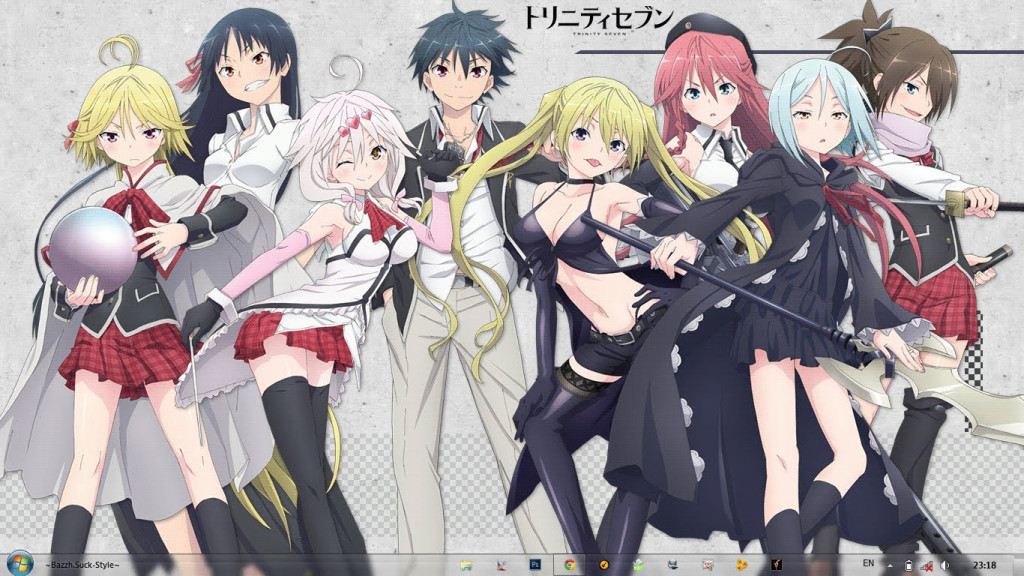 Trinity Seven (also known as Toriniti Sebun: Shichi-nin no Masho Tsukai in Japanese) is a Japanese romantic comedy anime television series which is based on a manga series of the same name. Written by Kenji Saitou and illustrated by Akinari Nao, the manga series was first published on December 9, 2010. Four years after the initial publication of the manga series Trinity Seven was picked up to be made into an anime television series. Following a brief production period, Season 1 of Trinity Seven premiered on October 8, 2014. Although Season 1 was followed by the release of an original video animation (OVA) special episode and two movies, fans of the show are still eagerly waiting for news on Season 2. While it was reported that second season had been confirmed, Trinity Seven Season 2 is yet to air for reasons unknown. Here’s everything we know about it thus far.

Trinity Seven Season 2 Release Date: When will it premiere?

Trinity Seven season 1 premiered on October 8, 2014, and fans have eagerly awaited news on Season 2 since then. In the meantime, two movies based on the show were also released on February 25, 2017 and March 29, 2019, respectively. This of course, gave fans hope about Season 2. In early 2019, it was reported that Season 2 had indeed been confirmed and would be premiering on April 11, 2019.

If you prefer watching anime shows in English, the good news is that Trinity Seven has a good English dub, and dubbed episodes can be found on Crunchyroll and HiDive.

The plot of Trinity Seven is a rather fantastical one, and follows Arata Kasuga, a young boy who lives a seemingly normal life with his cousin and childhood friend, Hijiri Kasuga. However, Arata’s normal life is completely turned on its head when the sun turns black and causes something called the Breakdown Phenomenon, which completely decimates the town and everyone in it. However, just before Hijiri’s death, she hangs a grimoire around Arata’s neck, and the magical book manages to save Arata from being wiped out.

Following the Breakdown Phenomenon, Arata is left completely devastated, and he wishes for his life to go back as it used to be. Unwittingly, Arata’s wish triggers the grimoire, which artificially reconstructs the life he used to have and wipes away all his painful memories about the Breakdown Phenomenon. At this point of time, a mysterious mage called Lilith Asami appears before Arata, and his artificially reconstructed world completely disintegrates in Lilith’s presence.

With Arata still reeling from shock, Lilith gives him two options – either hand over the book to her or die. However, Arata is willing to do neither, and after some conversation with Lilith, he decides to take a third option, which is to enroll in a top-secret magic school called Royal Biblia Academy, where six other magical students are awaiting his arrival. Together with Lilith, the six students form the Trinity Seven, the elite mages of the school who have their unique powers and skills.

As Arata trains himself in the discipline of magic and learns to master many powers, he sets his sights on preventing the destruction of his hometown and his loved ones with the help of his newfound friends.

Like most anime shows, Trinity Seven has dozens of characters, and pretty long list of main characters. Below, we’ve given you brief backgrounds of each of the main characters in the show.

Arata Kasuga: The main protagonist of the show, Arata has a cheerful and carefree personality, and lives with his cousin and childhood friend, Hijiri Kasuga. However, after a catastrophic event destroys his hometown and kills his loved ones, Arata, with the help of Lilith, joins the Royal Biblia Academy with the determination to become a mage. At the academy, he befriends the Trinity Seven, and together with them, he tries to save his hometown and his loved ones from destruction. Despite Arata’s serious quest, he is also a pervert and can often be seen flirting or cracking risque jokes with girls.

Lilith Asami: A teacher at the Royal Biblia Academy and a member of the Trinity Seven, Lilith meets Arata when she goes to his hometown to investigate the Breakdown Phenomenon. Although she is aggressive towards Arata initially, she eventually warms up to him and introduces him to the world of magic in the Royal Biblia Academy. She also becomes one of Arata’s first allies and friends following the catastrophe, and watches and supports him in his journey to become a mage. Later in the show, it is revealed that Lilith’s actual name is Azazel Lilith and that she is the daughter of a demon king who had her memories altered while travelling between two different worlds.

Arin Kannazuki: Another main character in the show, Arin is also a member of the Trinity Seven. It is revealed that Arin has no memory before the age of eight, and was lost in the world before the headmaster of the Royal Biblia Academy took her in and trained her. She rarely shows emotions and spares little thought about what others think of her. Interestingly, she also claims that Arata is her husband, although the two are not married. She often gets jealous when other girls speak to Arata, and later in the show, starts displaying some more emotion.

Levi Kazama: One of Arata’s earliest friends at the Royal Biblia Academy, Levi is part of the Trinity Seven. A user of shamanic spells, Levi is considered to be one of the world’s top three fighters.

Yui Kurata: A special mage who can communicate through dreams, Yui is also a part of the Trinity Seven. She is especially close to Levi, has a little sister personality, and looks up to Arata.

Lieselotte Sherlock: A beautiful young mage who is part of the Royal Biblia Academy and the Trinity Seven, Lieselotte used to hold the second seat of the Royal Library Inspectors. Later, it is revealed that she has a criminal past.

Mira Yamana: The head of grimoire security, Mira is also a part of the Royal Biblia Academy and a member of the Trinity Seven.