Jiggy Puzzles, like many of the ideas seen on the business reality show ‘Shark Tank,’ provide an innovative solution to a common problem. Featured on episode 22 of ‘Shark Tank’ season 12, the founder of the startup claimed that the attractive puzzles provide a fun and relaxing way to boost mental health while also supporting local artists. We decided to check in on this interesting concept and learn everything we could about Jiggy Puzzles and what the company is up to now. Curious? Let’s get to it.

Jiggy Puzzles: Who Are They and What Do They Do?

Jiggy Puzzles is the brainchild of Kaylin Marcotte. While working long hours at an all-consuming job with a startup, Marcotte, a self-described “chronic multitasker,” would use puzzles as a way to de-stress and stay focussed. At one point, she was completing 1000-piece puzzles every week, but given the generic and stock-photo-like images on them, she would generally just break them up and put them back in the box after completion. At one point in time, Marcotte even started a Snapchat series called “ugly puzzle selfies,” where she posed with puzzles featuring unflattering and boring images. 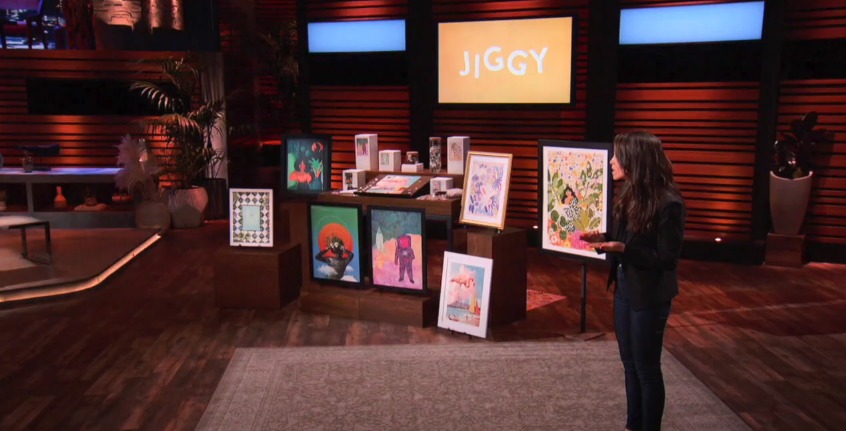 The need for prettier, more interesting-looking puzzles led Marcotte to begin attempting to reinvent the age-old puzzle. From 2015 onwards, she started collecting images of the kind of art she would like to see on puzzles and eventually launched Jiggy Puzzles in 2019. The puzzles feature art from emerging female artists from around the world, who then get a share of the profits from the sale of their puzzles. Through this model, Marcotte can simultaneously make engaging, artistic puzzles while also supporting female artists, something she is passionate about.

Based in Brooklyn, New York, the company goes further and provides customers with the means to display their completed puzzles like the art pieces they are. Each puzzle comes with a specially formulated clear glue as well as a straight-edge tool to apply it, essentially allowing the completed puzzles to be displayed like paintings.

Jiggy Puzzles: Where Are They Now?

Jiggy Puzzles launched in November 2019 with its Debut: 2019 collection, featuring six designs from six emerging female artists. After the initial push for holiday season sales, Marcotte noticed that orders were starting to dwindle. However, with the Covid-19 pandemic and the subsequent lockdown, sales got an unexpected boost as more and more people looked for fun activities to beat the boredom at home. Reportedly, her sales went up 550%, and traffic to her website also saw a jump of 250% during the lockdown.

However, supply chain issues soon forced Marcotte to innovate again. Aware of art galleries closing down and a lack of work commissions for artists during the pandemic, she came up with the concept of “Originals.” These were blank puzzle templates that were sent to the artist to be hand-painted and then auctioned off, with the proceeds going to the artists as well as relief funds. She also tied up with well-known personalities to help boost the campaign, and her puzzles featured art from the likes of Lili Reinhart, Sophia Bush, and Allison Williams.

Since their launch, Jiggy Puzzles has received widespread publicity, partly because of their innovative, socially helpful, and artistic offering, and also because of their fortunate timing. There are few companies, especially new ones, that benefited from the Covid-19 lockdown, and Jiggy Puzzles is one of them. The company has been featured on publications like Forbes as well as in Ellen DeGeneres’ Be Kind Box of socially conscious, small business products. They also got a shout-out on The Drew Barrymore Show.

Hollywood star Gwyneth Paltrow also bought a Jiggy puzzle for her 14-year-old son Moses. The puzzle, named “Boobs,” featured art by Brooklyn-based freelance illustrator Julia Heffernan and portrays a collection of breasts of various shapes and sizes. Apart from featuring various collections like ‘Tis the Season: Holiday 2020 and even the lockdown-inspired Staycation: Summer 2020 collection, Marcotte has also collaborated with local artists to make one-off hand-painted puzzles called ‘Originals.’ The 450 piece and 800 piece puzzles cost $40 and $49 respectively and feature themes for children as well as adults.

A little over a year into launching Jiggy Puzzles, the company has generated sales of over $1 million. In January 2021, they launched the Jiggy Puzzle Club, a monthly membership-driven program that offered to deliver a specially curated 500 piece puzzle to subscribers every month. There is still speculation about how puzzle sales will be affected once the pandemic subsides. However, in the meantime, Marcotte’s artistic, socially conscious puzzles continue to support emerging artists and promote mental wellbeing.

Read More: Update on The Scrubbie From Shark Tank