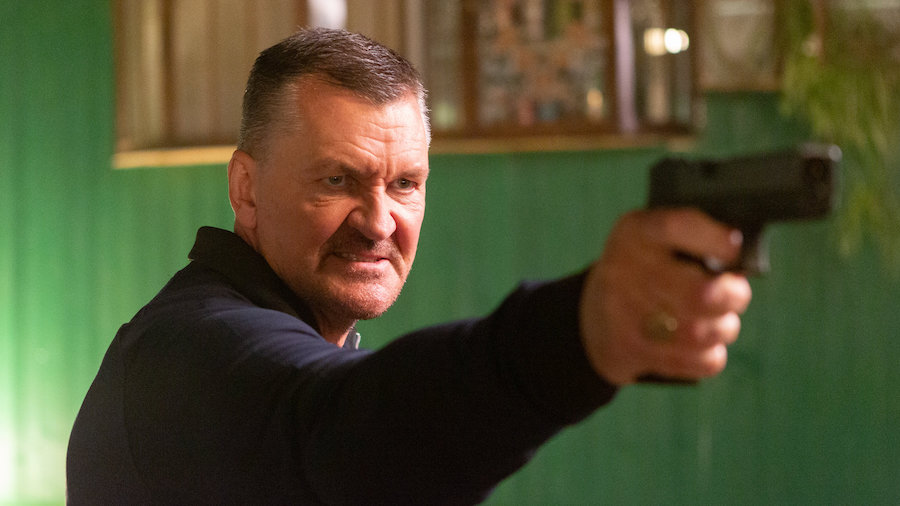 ‘Villain’ is a British crime drama that follows the story of a man named Eddie Franks. His whole life has been submerged in crime and violence, and after spending some time in prison, he decides to leave the past behind. He plans to move on and reconnect with his estranged family. However, when his brother falls into trouble due to the debt owed to a drug lord, Eddie is pulled back into the world of crime. What happens next is a streak of blood and mayhem and a startlingly raw portrayal of the criminal world, the insight into which makes us wonder if the story takes its inspiration from real events. Is Netflix’s ‘Villain’ based on a true story? Let’s find out.

Is Villain based on a true story?

No, ‘Villain’ is not based on a true story. It is based on an original script written by Greg Hall and George Russo. The title of the film was conceived by Hall, who wanted to pay homage to the Richard Burton movie. The idea took hold of the writers when they started thinking about making a movie that wouldn’t be like most other British crime dramas, but would also be appreciated by the audience in the terms of being financially successful. Russo had wanted to write a character-driven drama, but he found that funding for such projects was hard to come by.

In an interview with Vulture Hound, he said, “I tend to write drama, and unfortunately, a drama is hard to find funding for. It just so happened on the off chance, through my agent, I met Bart. I decided that I wanted to write a drama script, one that I could raise money for and get made. I knew the crime genre is a popular genre, and I’m familiar with that genre.” What further pushed him to make such a film was the fact that he found that most crime writers were unfamiliar with the world they were writing about. “I’ve grown up in the east ends, and I’ve grown up around that stuff. A lot of the scripts I get sent are written by people who have no idea of how that stuff works. It’s a fantasy of that world, and I just have a more grounded understanding of how that stuff works. So I knew I could write a decent British crime movie, but with a character driven element,” he said.

Greg Hall happened to be in agreement with his thought process. Both of them had been finding their place in “the underbelly of the independent British film industry”, where they discovered that audience popularity was what got financing to the projects. But in the habit of pleasing people, these stories would be “overly cliched and inauthentic.” “The worse examples of these films are deeply misogynistic, subtly racist and treat working class people like they are idiots,” said Hall. Despite this, they loved the crime genre and had grown up watching Scorsese’s work. They found similar work lacking in the British industry.

“Unfortunately for a number of reasons the British industry has produced a majority of poor substandard crime / gangster genre films despite some bigger budget stand out gems. Therefore we wanted to write a low budget crime thriller that challenged the norm, we wanted to write a genre film that ticks all of the boxes of the conventions and motifs but is a Trojan horse for a drama that shows working class characters in an authentic way and tackles issues of race, class and crime in a nuanced and believable fashion. This is the attitude we apply to writing all of our genre work, whether it’s crime or horror, to satisfy the genre expectations but also tell a story with authenticity and ingenuity,” he said.