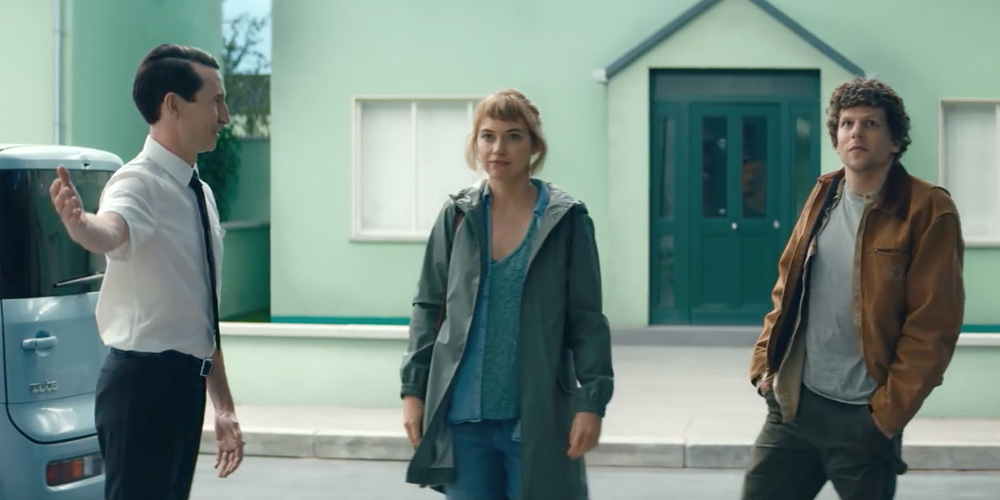 ‘Vivarium’ opens with a graphic scene depicting a cuckoo’s nest from which other offsprings are being brashly pushed off by just one bird demanding to be fed. A few moments later, Jesse Eisenberg’s character, Tom, finds one of these offsprings laying dead on the ground. In a rather casual manner, he claims that it’s a tough world out there and buries the bird. And it’s these initial moments of the film that very well capture the essence of its themes.

With what follows, from being comical and funny, the film subtly drops its tone into a darker domain and presents a story that oozes with absurdity and existentialism. At times, it feels like you’re watching something very familiar and then, other times, it seems extremely mundane. Well, if the film’s entire premise, especially its ending, left you wondering what it was all about, here’s an explainer for you.

Starring as Gemma and Tom, Imogen Poots and Jesse Eisenberg are a young couple who are thinking of buying their first home. While trawling around looking for all the options that they have, they end up meeting a strange yet convincing real estate agent who takes them to a suburban development called Yonder. Initially, the suburban development seems like an ideal place where almost anyone would want to have a family home.

It has perfect girded streets with identical houses stretching towards the horizon. But things take a very grim turn when the real estate agent abandons them there. When they attempt to leave, they realize that they somehow end up going in circles and return to their House #9. What started off as a dream to own a new home soon turns into a living nightmare for the couple.

The Boy and the Vivarium, Explained 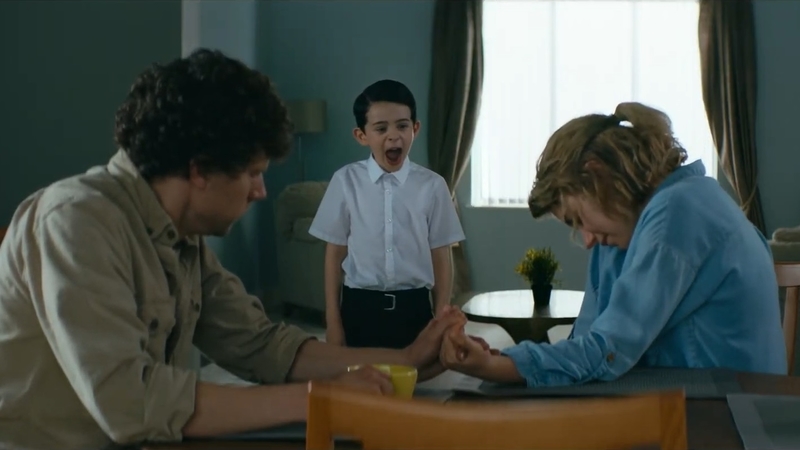 A simple one-dimensional explanation for the movie would be that it depicts some sort of an alien invasion. As the title suggests, Tom and Gemma were kept in a vivarium—an enclosed environment with semi-natural conditions for the purpose of observation. This theory also explains all the supernatural incidents that take place throughout the runtime of the film. Tom and Gemma never really see the people who have kept them there but they still get supplies almost every day. Moreover, during the second half of the film, Tom obsesses over digging a hole in his garden and eventually ends up finding a dead body in it. Later, he, too, gets mysteriously poisoned by something and dies.

The package in which they had received the baby came with a note that said: “raise the child and be released.” Being released did not mean that they would be left out in the world. It meant that once they’re done raising the child, they could finally rest in peace and be released from the vivarium forever. In another scene, the boy gets a strange book from somewhere, which contains a mysterious alien language and diagrams of human reproduction. And when Gemma asks him to imitate the person who gave him the book, he turns into this weird creature with frog-like anatomy. So going by all of this, it becomes pretty evident that the couple was abducted by an alien species who used them as a host and then “released” them. 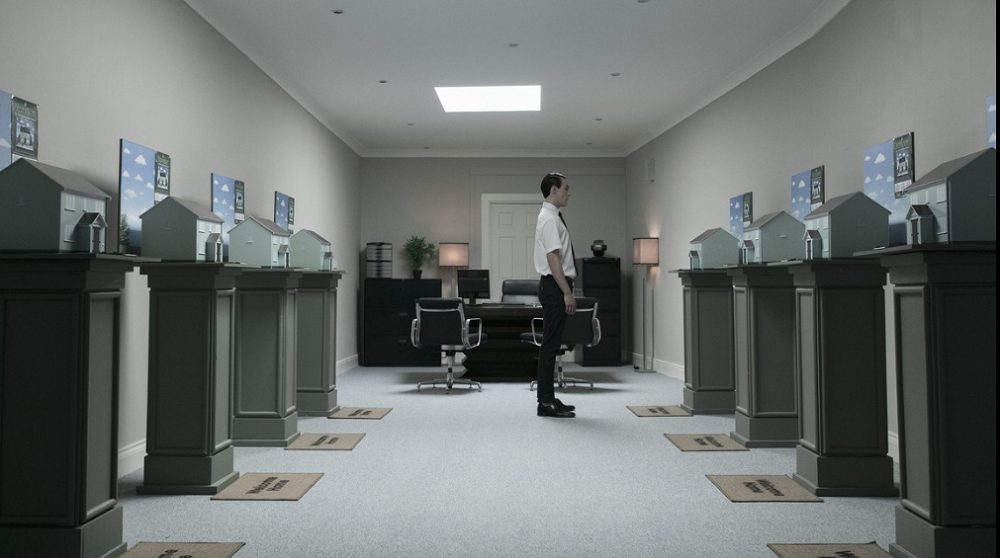 In the final moments of the film, Tom dies and Gemma tries to kill the boy. When she attacks him with a shovel, he turns into an alien again, lifts up the sidewalk, and disappears underneath it. Gemma follows him and finds herself in a trippy web where other similar kids seem to be abducting and torturing other human couples. This scene suggests that Yonder Development is a whole web of households where many humans are being kept in the vivarium and are being forced to raise mutant alien children. In the end, even Gemma dies, and both Gemma and Tom are buried in the hole that Tom had dug up.

In the closing moments, the boy who was being raised by Gema and Tom arrives at the same Yonder office which was depicted earlier in the film. By this time, the real estate agent from the early moments of the film seems to have grown old. The boy puts him in a body bag, takes his chair, and lures another couple into his web. The ending suggests that the lifespans of these aliens are extremely short.

Compared to the boy who grows into a man in a matter of months, Gemma and Tom remain the same. And in the meantime, the first real estate agent grows old and dies. These aliens species shown in the movie are basically parasites who use humans as hosts and then kill them. That’s why both Gemma and Tom die once he’s mature enough to take over the Yonder office and spread this trap even further. This also explains why the boy tells Gemma that a mother’s job is only to prepare her son for the world while he puts her in a body bag. And all this while, House #9 probably represented 9 months of childbearing, until the boy could step out in the real world.

A Parody of the Suburban Dream 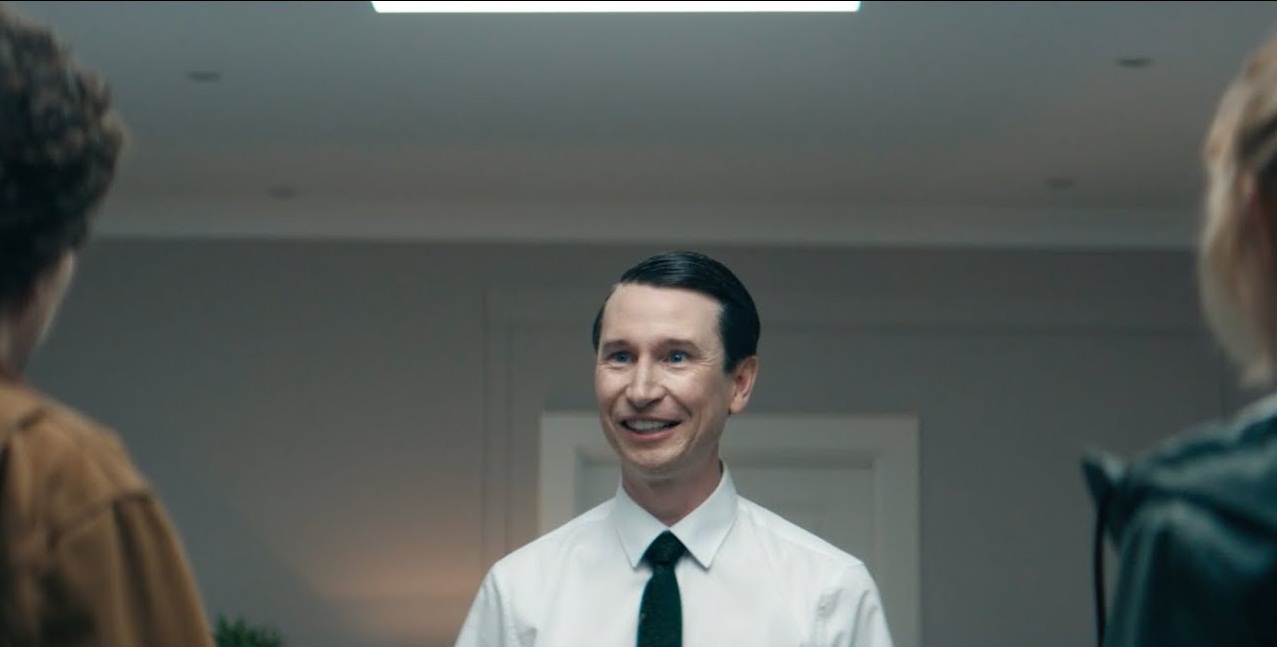 If we take a three-dimensional view of the movie and its themes, it actually serves as a metaphor for the loop that almost all of us tend to live in. It sheds light on the impact of our shallow dreams that revolve around the ideal suburban lifestyle and domestic anxieties. The moments in the film in which Gemma and Tom perceive the boy as an alien is a depiction of how parents often live in the fear of not being able to be on the same frequency as their children.

Gemma and Tom are in a kind of suburban limbo that they cannot escape exactly how many people try to get on the “property ladder,” but later struggle to sell any of it. Their death signifies how in real life, many of these suburban properties are left undone when the government pulls out and they are simply left as graveyards for the ones who end up buying them. Tom sees his garden as a means of escaping back into his old life but the more he digs deeper into it, the more he gets closer to his own death. This shows how one may regret buying into the whole social contract of having an ideal home and family. And by the time one tries to escape it, it’s too late.

I wouldn’t say that it’s a direct reflection of the society in general, but it does make you ask several questions about the direction in which many of us are heading in. Are middle-aged men tirelessly working themselves to death and are incapable of love just like Tom? On the other hand, are women like Gemma forced to live a lonely life that is confined to raising an ungrateful child? There are no answers to these anywhere in the movie, nonetheless, these notions are presented in a very intriguing manner and make you wonder if human existence is utterly futile.

Read More on Explainers: Color Out of Space | Annihilation