Was Toledo a Real Person? Who Is He Based on?

In ‘Ma Rainey’s Black Bottom,’ we learn more about the legendary blues singer and her band as they try to record some songs at a studio on a fateful afternoon in 1927. Even though Ma Rainey’s name is in the title, the bandmates play an equally important role in the film. For this reason, we couldn’t help but wonder if Toledo (Glynn Turman), the pianist, was based on a real person. If you’re curious about the same, then don’t worry, because we have got your back.

Was Toledo a Real Person? Who Is He Based on?

No, Toledo was not a real person. By all accounts, he seems to be the brainchild of the esteemed playwright, August Wilson, who wrote the eponymous play that the movie is based on. The pianist is an older man who has definitely seen a few things in his lifetime. This is evident from his thinking process and the way that he deals with Levee, whose unfiltered optimism can come across as irrational confidence. 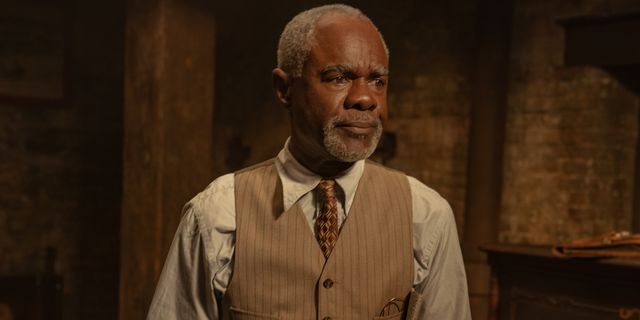 In one of the beginning scenes, the group talks about what it means to have a good time. Toledo strongly feels that there must be more to life than simply enjoying it, otherwise, it would make for a redundant existence. He even states that African Americans simply talk about a good time, but no one discusses how to improve their plight. Toledo thinks that it is the collective responsibility of the community to uplift themselves.

Subsequently, the conversation changes and everyone tells Levee to steer clear of Ma’s girlfriend, Dussie Mae. Toledo, who now understands the subtleties of relationships after his own marriage fell apart, states that he is a fool who has tried everything once but doesn’t go down the same erroneous path twice. He recalls how he was married to a great woman and saw a future with her. But when she joined Church, she realized that he wasn’t a good Christian man and left him because he was a “heathen.” He understands that he couldn’t give his ex-wife what she needed.

From these instances, we learn that Toledo is a man who understands the status quo. Life has always been his teacher, and he instills these morals and values in himself. There is no man on Earth who hasn’t made mistakes, and the pianist is the same. However, he does learn from them. Furthermore, he philosophizes about the plight of the black man and has some well thought out arguments as well.

Even though Toledo is a fictional persona, we think that it is highly likely that the playwright could have sought some inspiration from one of the real bandmates, Dave Nelson. He, too, was an established musician who was well-versed with the trumpet and the piano. Furthermore, he was also a composer. He was a part of the Wildcats Jazz Band that toured with Ma in 1924.

In one scene, Toledo improvises a tune and a few lines in which he refers to the black community as “leftovers.” This could allude to Dave’s ability to compose new music as well. Even though not much is known about his personal life, Dave often worked with his uncle, King Oliver, and even collaborated with big names in the game such as Ida Cox, Jelly Roll Morton, and Richard M. Jones. This experience would likely have been invaluable to Dave. We think that he fits the bill based on these professional similarities.

Read More: Was Cutler a Real Person? Who is He Based on?