Were Marlon Brando and Frank Sinatra Friends or Did They Hate Each Other? 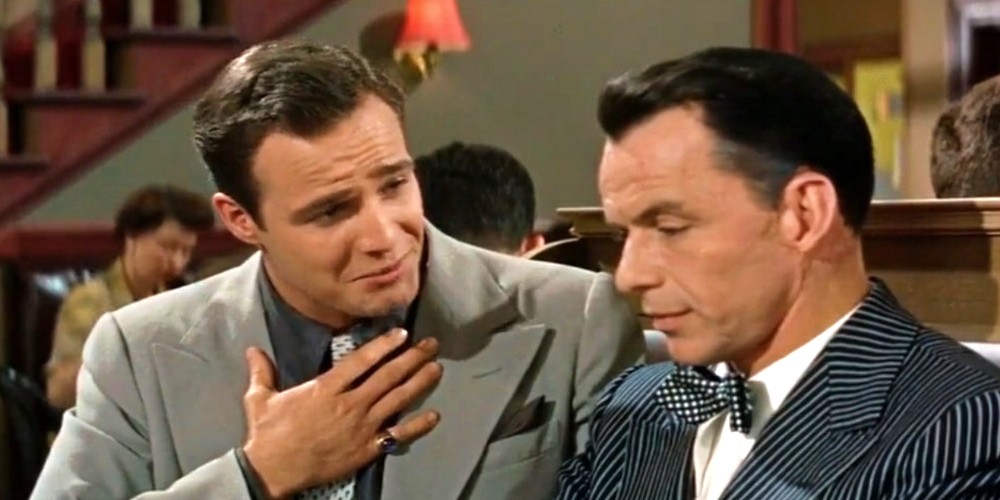 Created by Michael Tolkin, ‘The Offer’ is a biographical drama series that revolves around the production of Francis Ford Coppola’s 1972 gangster film ‘The Godfather.’ The series depicts producer Albert S. Ruddy (Miles Teller) and his creative team overcoming several obstacles in making the seminal film. In the show’s fourth episode, the team meets with actor Marlon Brando to discuss his desire to star in the movie.

While Ruddy assumes that Brando is impressed with the script, Brando reveals that he wants to star in the movie to get back at Frank Sinatra, who hates author Mario Puzo’s novel ‘The Godfather,’ which the team is adapting. Given the episode’s allusion to a feud between Brando and Sinatra, viewers must be curious to learn more about their relationship in real life. If you are wondering whether Brando and Sinatra were friends or if they hated each other, here is everything you need to know!

Marlon Brando and Frank Sinatra are among the most revered names in Hollywood. Sinatra began his career in music during the 1930s and delivered several hit songs. On the other hand, Brando began his acting career in the 1940s by starring in several stage plays. By the 1950s, Brando was an emerging star in Hollywood. Meanwhile, Sinatra had transitioned to acting. After a few minor roles in the 40s, Sinatra had become a leading man by the 1950s. Thus, at the time, Brando and Sinatra were two of the most shining names in Hollywood.

The two were in consideration for the leading role in the 1954 crime drama film ‘On the Waterfront’ directed by Elia Kazan. Initially, Kazan wanted to cast Brando in the role of Terry Malloy, the film’s protagonist. However, Brando turned down the part. Kazan then approached Sinatra to play the role, and they reached an agreement in principle. However, Sinatra had not signed a contract. Later, Brando reconsidered the role and signed a contract to star in the movie, leaving Sinatra out of the frame. The incident would spark the start of a difficult relationship between Brando and Sinatra.

Shortly after the incident, the two men were roped in for ‘Guys and Dolls,’ a musical comedy film directed by Joseph L. Mankiewicz. Sinatra was vying for the lead role of Sky Masterson. However, the part once again landed on Brando’s plate. The incident reportedly led to animosity between the actors. Sinatra was cast as the second lead, Nathan Detroit, and shared the screen with Brando. However, during their time on the film’s set, Sinatra and Brando reportedly did not see eye to eye.

Sinatra’s purported resentment for Brando grew after the latter won an Academy Award for his performance in ‘On the Waterfront.’ The tension between the two was high during their time on set together. It was reported that while Sinatra dubbed Brando “Mumbles” for the actor’s tendency to shoot several takes, Brando deliberately forgot his line to get back at Sinatra. Brando’s close friend Carlo Fiore alleged that it seemed that the actor “wanted to choke Sinatra” while filming a scene that required the former to grab the latter’s neck to conceal the bowtie.

Things escalated after Sinatra’s wife, Ava Gardner, allegedly spent a day on set with Brando in Sinatra’s absence. According to Brando’s close friends, some goons with alleged connections to Sinatra threatened the actor. Brando was abducted while out riding his motorbike and roughed up by the goons. However, the actor never accused Sinatra of the act. Ultimately, given the circumstances between Brando and Sinatra, it is safe to say that they had an ongoing feud that was never fully resolved. Hence, Brando and Sinatra were definitely not fond of each other and were farthest away from being friends.

Read More: Is Francoise Glazer Based on a Real Person? Is She Dead or Alive?