Review: West Side Story is a Fresh Look at an Emotional Story 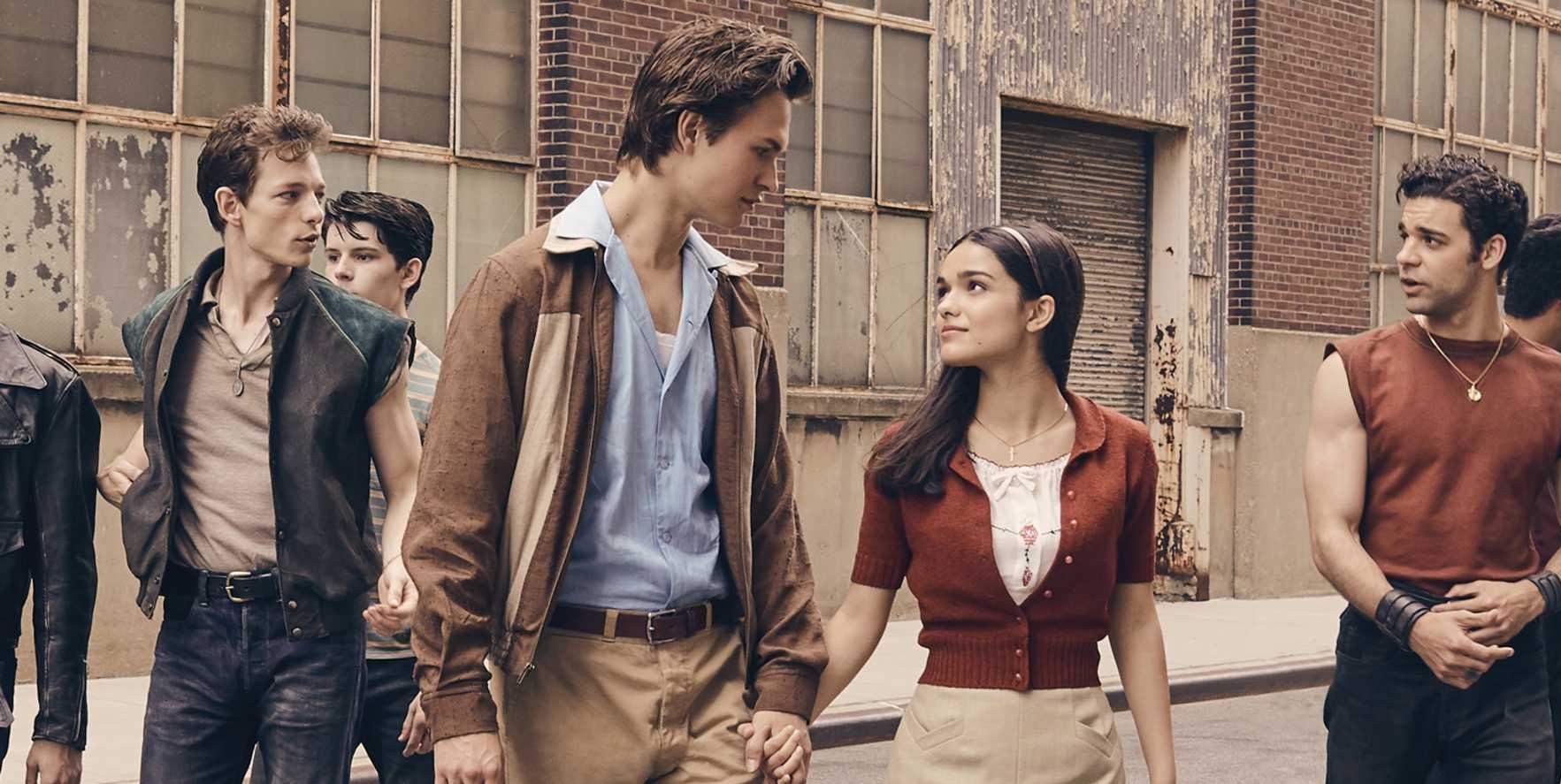 Making a new adaptation of the film West Side Story is a bold move for any filmmaker, even Stephen Spielberg. Both the original 1957 musical and the 1961 film, which won the Oscar for Best Picture, are beloved by theatre and film fans alike. However, the 2021 film provides enough new material in Tony Kushner’s screenplay to transform it into something all its own. The previous film has rightfully often been criticized for casting white actors in Puerto Rican roles. Spielberg’s film casts Latinx actors in these roles, righting one of the wrongs of the past, even though it would have been better to see more Puerto Ricans in a film largely centered around them.

This film retains the music by Leonard Bernstein and most of the original lyrics by Stephen Sondheim (with some changed for cultural sensitivity). Spielberg and Kushner set their version explicitly in the late 1950s, during the time when the Lincoln Square area, home to the San Juan neighborhood, was being cleared to make room for the Lincoln Center.

The Jets, a gang of white boys including Polish- and Irish-Americans, are continually in conflict with the Sharks, who are Puerto Rican. But they’re also antagonized by the law, as personified by Lieutenant Schrank (Corey Stoll) and Officer Krupke (Brian d’Arcy James), and gentrification. The impending loss of their turf looms over all of them, even as they fight for who has control of it as they await eviction.

The film begins with a ballet of the Jets painting over a Puerto Rican flag mural, resulting in a scrabble between the two groups. Despite the beautiful dancing, there’s a real sense of danger from the beginning. The Jets are led by Riff (Mike Faist), a scrappy and sarcastic young man who, despite his rough exterior, is dedicated to the other guys in his gang. He’s willing to do anything to protect them and their control on the neighborhood – though it’s clear that Riff himself has an idea that their fight might be futile.

Bernardo (David Alvarez), the leader of the Sharks, is a boxer who dreams of earning enough money to return to his homeland, though his girlfriend Anita (Ariana DeBose) would prefer to stay in America where she hopes to one day have her own dress shop. Bernardo has an easier time garnering respect and admiration from the other Sharks than he does from his 18-year-old sister, Maria (Rachel Zegler). After taking care of their father in Puerto Rico for years, she has come to join Bernardo in America and is eager to make a life for herself. Spielberg’s Maria is headstrong and testing the boundaries of her independence, eager to assert herself as a young woman who’s not a child any longer. 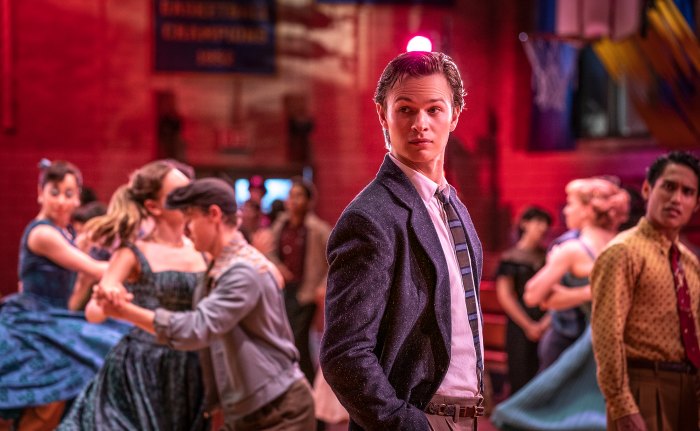 It’s no wonder that Tony (Ansel Elgort) is drawn to her when he first sees her across the crowded gym during a dance. This version of Tony is now on parole from being imprisoned for a year after an incident in a fight with another gang. He’s working at the drugstore for Valentina (Rita Moreno), the Puerto Rican widow of a white doctor. This new character perhaps explains why Tony thinks that things could work out with Maria when he falls in love with her after one conversation. He’s naively hopeful that he can convince Bernardo to let him be with Maria, insisting “I’ll make him like me.”

There are other changes to the original storyline as well, like making the role of Anybodys, played by non-binary actor Iris Menas, more explicitly transgender. Bernardo and Anita’s relationship is given more weight and their excellent chemistry, compared to the duller chemistry between Elgort and Zegler, makes them seem like the central relationship of the film. Spielberg and Kushner also recontextualize songs like “I Feel Pretty” and “Gee Officer Krupke” to make them more tongue-in-cheek.

The film is every bit as beautiful as you would expect one made by Spielberg to be. The camera weaves impressively through the rubble of the buildings being torn down and Janusz Kamiński’s cinematography plays with reflections in shiny floors and puddles in creative ways. They recreated a long-lost version of New York City and Paul Tazewell’s costumes are beautifully designed to accentuate the dance numbers.

Unfortunately, the choreography by Justin Peck (informed by Jerome Robbins’s original choreography) doesn’t always work well with the cinematography. At times, it feels like the camerawork is hiding rather than showing off the dancing. 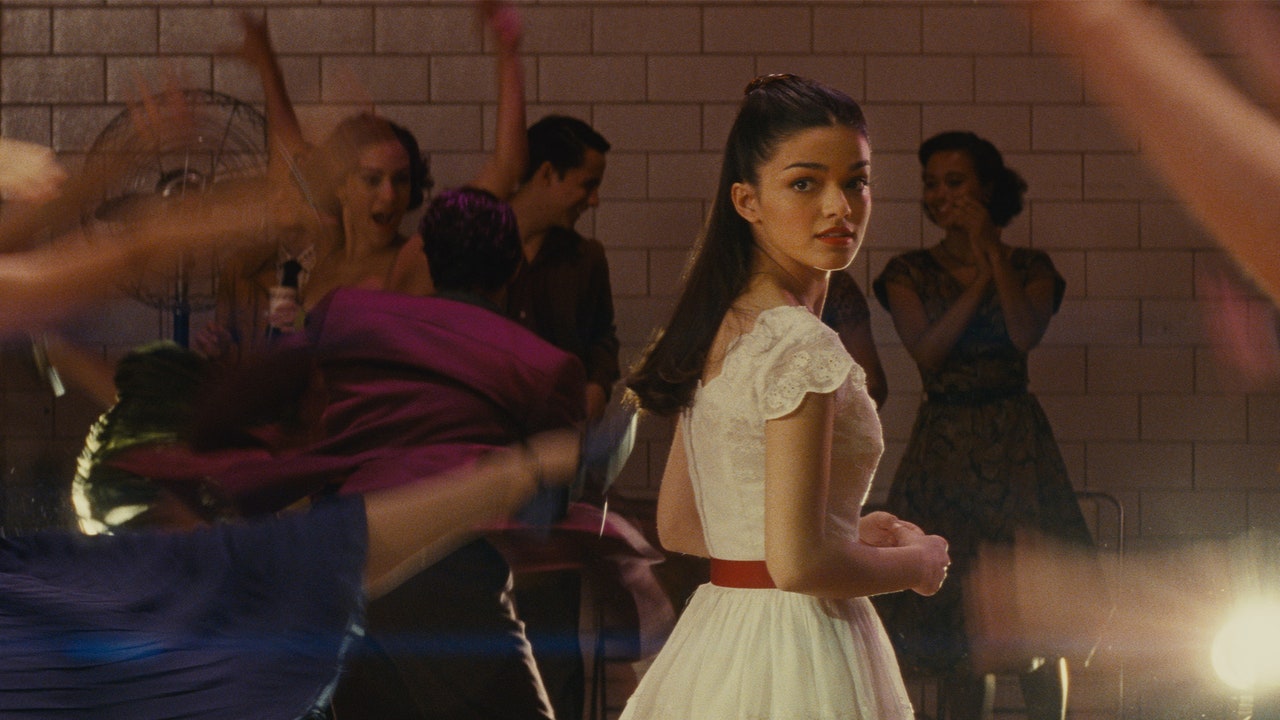 The film largely still works due to the fantastic performances. Zegler makes her film debut as Maria and not only is her singing fantastic, but her acting is certainly up to par with her older castmates. It’s a special thing to see an actress in the process of becoming a star and Zegler certainly is, with two major studio movies already lined up. Her counterpart Elgort is less successful as Tony, never seeming to fully capture his lovesickness or make us believe that he was once the leader of the Jets alongside Riff. He’s decent in most scenes and his singing is passable, but he has moments that are actively bad – most notably his over-the-top reaction in his most emotional scene.

The supporting cast shine from Moreno, the 1961 film’s Anita, as the wise Valentina to James, whose Officer Krupke seems genuinely concerned for the young men he’s policing. Alvarez is fantastic as Bernardo, who maintains a façade of bravado while figuring out how to build a life in America. The true standouts of the cast are Broadway actors Faist and DeBose, who both have a magnetic presence in addition to their singing, dancing, and acting talent.

Faist is a less tough and physically intimidating Riff than we’ve often seen in the past, but his dedication to the Jets, regardless of where that might lead, is chilling. DeBose steals every scene that she’s in. It’s not an easy feat to share the screen with an actress who previously won an Oscar for the role you’re playing, but DeBose deserves her own awards and every scene in the last third of the movie could be her “Oscar scene.”

Despite some flaws, this new adaptation does justify its existence though Spielberg struggles to balance realism and theatricality, a tough challenge for any musical director. The cinematography is gorgeous and the performances are phenomenal, so West Side Story excels as a film even when it doesn’t as a musical.

Read More: Is West Side Story Based on a True Story?