Where Are Shawn Benson and Justin Jensen Today? 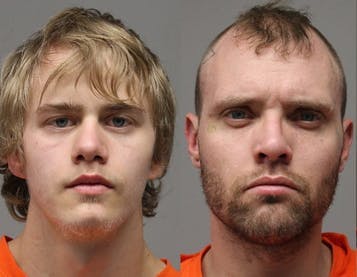 ID’s ‘Dead Reckoning’ follows several murder cases whose details had to be put together to clearly depict what happened to the victims in several murder cases. In its first episode, ‘Murder in the Park,’ the episode retraces the murder of a 19-year-old single mother named Cheyenne Clough, who was beaten and shot to death in Crow Springs County Park, Minnesota.

Clough, who was left to die on 1 June 2016, was allegedly spotted by a girl on her way to school. Even though she was taken to the hospital, she soon passed away due to the grave injuries she had suffered. Clough, the mother of a three-year-old son, took four bullets to her head, neck, and shoulder. The devastating murder led to the arrest of six individuals.

Who Are Shawn Benson and Justin Jensen?

Cheyenne Clough’s autopsy report revealed that she was shot with a .22 caliber weapon. Soon after her death, then 21-year-old Shawn T. Benson was arrested. Benson, who is from Buffalo, was charged with second-degree murder by Wright County Court. Justin Jensen, who was 28 years old at the time, was arrested and charged with aiding and abetting second-degree murder. Four others were also arrested and charged for their involvement in the murder.

The investigators alleged that on 31 May, Clough had a serious argument with Natasha Brandenburger and several others, including Benson and Jensen. It had something to do with one of them calling a bounty hunter to get her boyfriend arrested on an outstanding warrant. She allegedly threatened to call law enforcement and have Callie Anderson arrested on her own outstanding warrant. Reportedly, she also got into a physical rift with Brandenburger. After this, Jensen allegedly felt that Clough would snitch on all of them, and he made a plan that would end in the tragic death of Clough.

After the argument, which took place at Jensen’s residence at Maple Lake, he gave a .22 caliber gun to Benson and Edward Zelko, asking them to kill Clough. Jensen placed the gun in the car. According to a report, around 2:00 AM, both Benson and Zelko injected meth. As per the plan, they told Clough that they would be dropping her home. Instead, they took her to Crow Springs County Park, where they beat and shot her to the verge of death, and left her to die.

Jensen, Benson, and Brandenburger were caught at International Falls, as they were allegedly attempting to flee. Zelko was arrested at Todd County and subsequently charged with aiding and abetting second-degree murder. Thomas Nicholson, of International Falls, was arrested and charged with aiding an offender to avoid arrest. Later, Wright County Attorney Tom Kelly stated that they were apprehended while trying to flee to Canada.

In March 2018, Benson pleaded guilty to second-degree intentional murder. The first-degree premeditated murder charge against him was then dismissed. He also agreed to serve a sentence of 40 years in prison, which is the statutory maximum. In May 2018, he was sentenced to 40 years in prison with credit for the 721 days he had already served. Jensen, too, pleaded guilty for aiding and abetting to second-degree murder and entered an Alford plea. According to Attorney Brian Lutes, “It’s a legal case that permits someone to plead guilty by establishing what happened by the testimony of other people.” At the time, his lawyer stated that he would be sentenced to a little more than 27 years. However, a later report stated that both Benson and Jensen received 40 years each for their involvement in the crime.

Zelko later pleaded guilty and was sentenced to 30 years in prison, with credit for the 778 days he had already served.

Where Are Shawn Benson and Justin Jensen Now?

Since they were sentenced, there have been no reports concerning their whereabouts or any other case updates. However, since they pleaded guilty and were sentenced, one can definitely assume that they are serving their respective prison sentences. (Feature Image Credit: Kstp.com)