Where Was A Clockwork Orange Filmed? 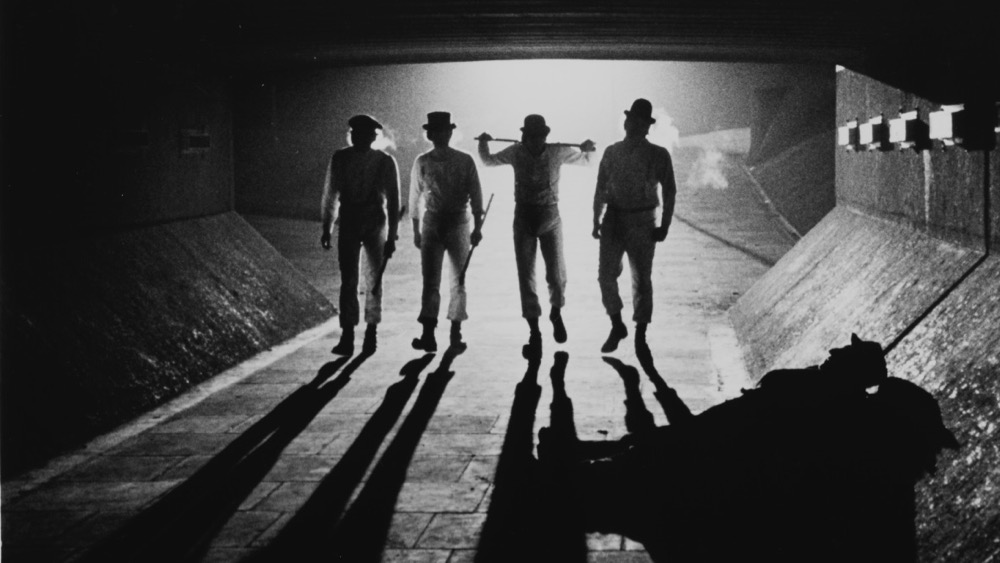 Directed by Stanley Kubrick, ‘A Clockwork Orange’ follows Alex DeLarge (Malcolm McDowell), an “ultraviolent’ individual, who along with his “Droogs,” commit horrific crimes. When captured by the police, he chooses to be a part of the Ludovico experimental technique, which is based on an aversion therapy that aims to rehabilitate the criminals back into society within two weeks to avoid overcrowding the prisons. The outcomes are not what anyone expected.

Based on the eponymous 1962 book by Anthony Burgess, ‘A Clockwork Orange’ was steeped in controversy, upon its release. However, over the years, it has become one of the defining works in the entertainment industry to highlight mental health issues and delinquency.

One of the most iconic filmmakers of all time, Stanley Kubrick, is known to be a perfectionist who would ensure that he translated on the screen what he had in mind with utmost sincerity and detail. As the movie is based in London, most of the scenes were filmed in London and the surrounding regions. It was shot between September 1970 and April 1971, which makes ‘A Clockwork Orange,’ the quickest film shoot in his career. Here are the specific details!

London and the Home Counties, England

‘A Clockwork Orange’ was filmed in Berkshire, Buckinghamshire, Hertfordshire, and Essex, located in Home Counties, which surround Greater London. Starting with London, which provided most of the settings for the film, the interiors for Parkmoor Prison were filmed at Woolwich Barracks Prison in Woolwich, and Wandsworth Prison on Heathfield Road was used for the exteriors. At the Wandsworth Bridge Roundabout is the place where the Droogs attack a drunken person, who later exacts his revenge.

Notable moments in the movie take place at the Flat Block Marina, which is an artificial lake called Southmere Lake, on Thamesmead South. To portray the dystopian city that serves as the backdrop for the story, Thamesmead South Estate played a significant role. This Estate was built bit by bit over time between the 1960s and 1980s. One of the most memorable scenes takes place on Binsey’s Walk, where Alex throws Dim (Warren Clarke), one of his Droogs, in the water and chops off his hand to assert his authority over the others.

Alex’s housing estate was on this property as well, with the exteriors being filmed at Tavy Bridge Centre on A2401 Yarnton Way, which now does not exist. A few scenes were also filmed at the Chelsea Embankment in London. Alex’s favorite record store was filmed in the basement of the Chelsea Drug Store, which opened in 1968 on Kings Road. Today the building is the Chelsea branch of MacDonald’s.

Other significant places for filming were the Nettleford Hall at West Norwood Library that hosts the press conference where Alex is humiliated. Tagg’s Island, Kingston-upon-Thames is the theatre where the gang fight breaks out. Berkshire featured during the filming at the Ward Royal, Windsor. The Pinewood Studios at the village of Iver Heath in Buckinghamshire was also part of the production for ‘A Clockwork Orange.’ 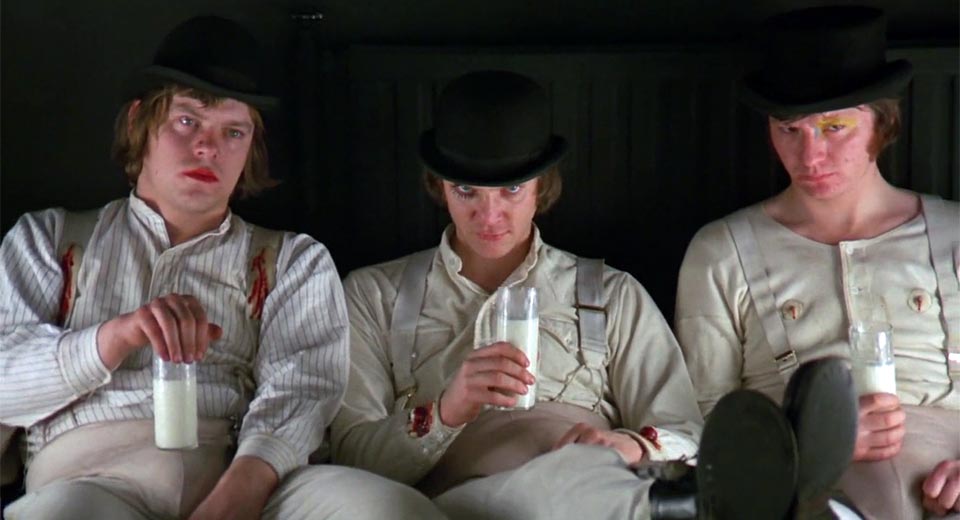 Hertfordshire, another Home County, provided quite a few locations for filming. Korova Milk Bar is an integral part of the story, where the Droogs drink milk laced with psychedelic substances before they venture out on their spree of crime. This was a set built in an old factory on Elstree Way at Bullhead Road, close to the EMI-MGM Elstree Studios.

However, the building does not exist anymore as it has been converted into a petrol station. The studios were also used to film the scene where Alex is getting checked in at the prison. The bathroom and hallway for Mr. Alexander’s house were also filmed here. It was in this house that Mr. Alexander gets him back and takes care of him, without realizing that Alex is the same person responsible for maiming him and raping his wife. 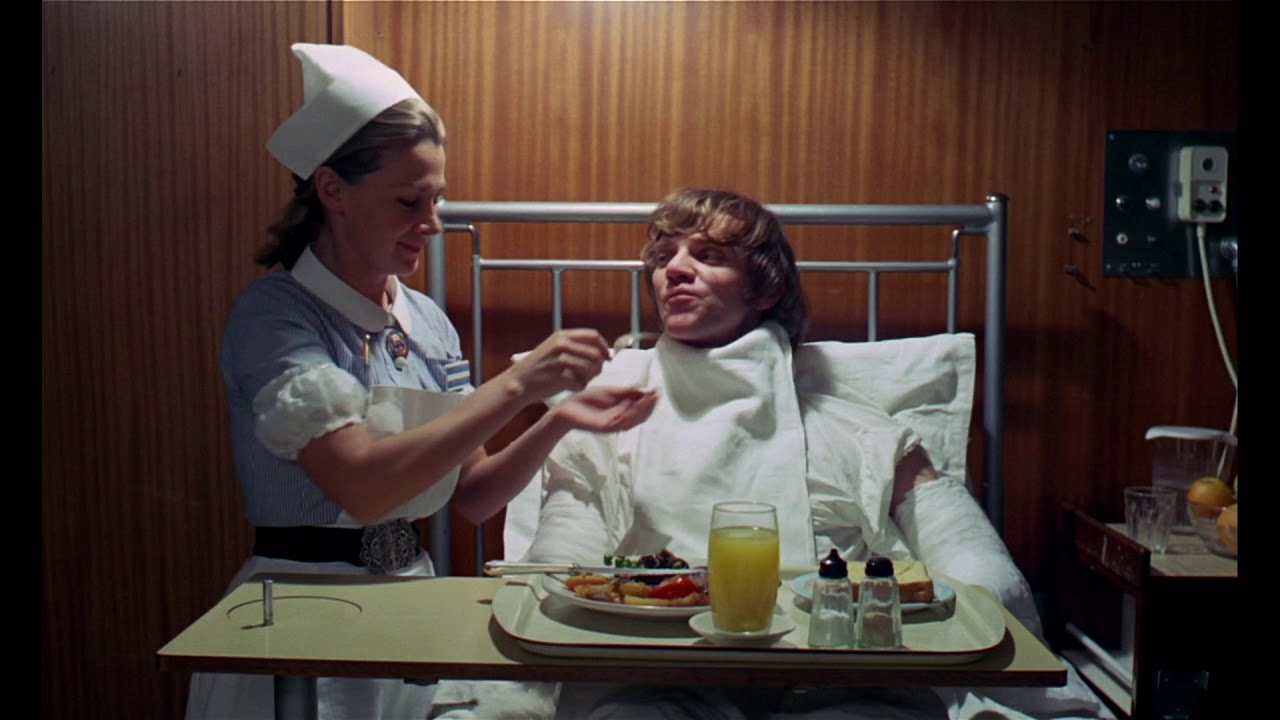 For Mr. Alexander’s home, most of the scenes feature the Skybreak, a property at The Warren in Radlett. Alex’s Municipal Flat Black 18 A, on Linear North was an important setting, which is on Stratfield Road in a high rise building called the Canterbury House. It belonged to a couple who were moved out for the duration of the filming, and the house was restored to its original state before they moved back in.

Miss Weathers’ (also known as the Cat Lady) house in the film is Woodmere Health Farm, which used to be the Shenley Lodge in Blenheim Mews. It is now the Manor Lodge School on Rectory Lane in Ridge Hill, Shenley. Some other significant spots are at the Edgwarebury Hotel on Barnet Lane, where Alex jumps out the window, and the Radlett Aerodrome Hangers, where the snow rape fantasy sequence is filmed. At the end of the film, the hospital scene is shot at Princess Alexandra Hospital, Harlow, in Essex.

The infamous Ludovico Medical Facility, where Alex undergoes aversion therapy, is one of the most uncomfortable scenes to watch. In the filmed sequence, an actual ophthalmologist administered the eye drops to ensure that Malcolm McDowell’s eyes do not dry up or get damaged. However, his corneas were scratched due to the metal holders, and he temporarily lost his eyesight. 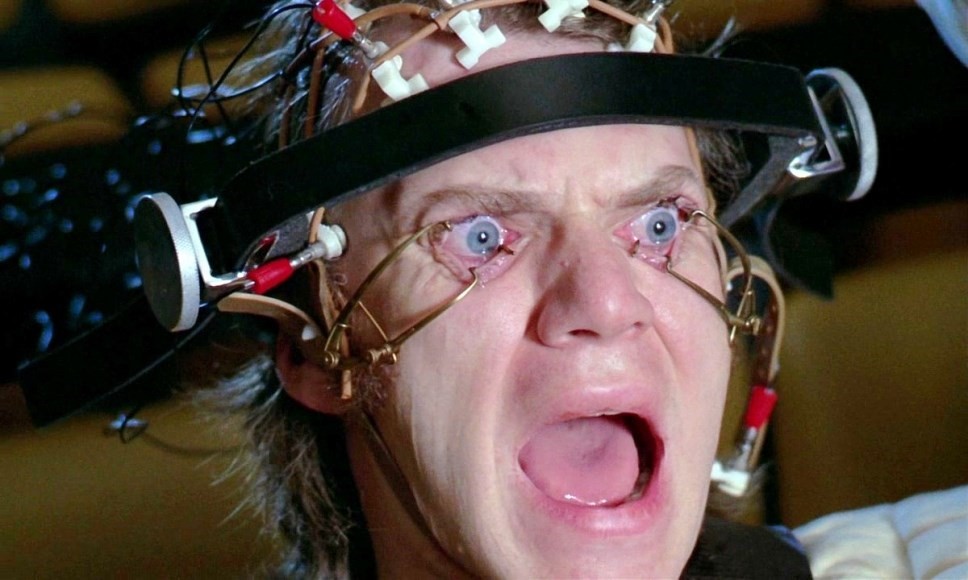 This iconic scene was filmed at the Lecture Centre at Brunel University, on Kingston Lane, near Uxbridge. The entrance lobby of Alex’s apartment was also filmed on this campus, at Tower D, although the apartment itself was filmed in Hertfordshire.

New House, 4 Church Street on Shipton Under Wychwood stood in for the exterior of Mr. Alexander’s house, although the interiors were filmed at Skybreak in Radlett. This Church Street house was built up in 1964, although now it is not visible from the street because it is hidden by tall trees.