Where Is It’s a Sin Filmed?

‘It’s a Sin’ is a five-part British drama miniseries that revolves around a group of gay men living in the United Kingdom. When the group dares to embrace themselves for who they are, everything seems perfect at first. They hope that the world will accept them for their sexual orientation. The men confront their loved ones and become vocal about their identity. But then something happens that changes everything. HIV/AIDS starts spreading, and with it, rumors also spread that it only kills gay men.

Now, the group finds themselves in a spot as they face demonization and public shaming. As the story progress, they realize that they need to face the disinformation campaign against them. The show depicts the courageous journey of these men as they fight for themselves and millions of others who are facing unjust persecution around the world. If you too loved the show and want to know where it is filmed, you have come to the right place. Here’s everything you need to know!

‘It’s a Sin’ is filmed entirely in the United Kingdom. Located in northwestern Europe, United Kingdom has a significant influence on the entertainment industry and has produced many artists who have attained international fame and recognition. We learned more about the specific filming locations, so let’s have a look at them.

Manchester is the primary filming location for ‘It’s a Sin’. The shooting in the city began in October 2019. Paton Street, near Piccadilly Station, was used for most of the outdoor shots. Several important scenes were filmed in Star and Garten pub on Fairfield Street. The Old Wentworth High School in Eccles was turned into a studio, and the interior filming for the series was done there. In the show, Jill, Ash, Ritchie, Roscoe, and Colin live on Paton Street, Manchester. 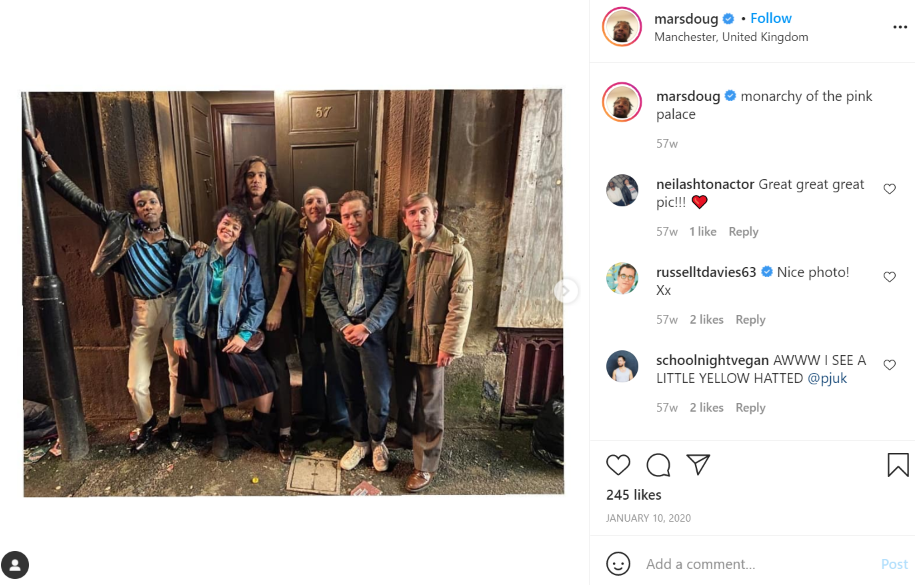 A dilapidated Manchester school was used to create the first dedicated HIV ward. Manchester also doubled as London for many scenes. Even though the show is set in London, it was not used as a shooting location. Victoria Baths, the Thirsty Scholar on New Wakefield Street, Manchester Crematorium on Barlow Moor Road, and The Embassy Club on Rochdale Road also served as filming sites for several scenes on the show.

Liverpool is another important shooting location, and production began there in early 2020. The streets around Cunard Building were primarily used for filming. On one side, the shooting for a London hotel was conducted on Brunswick Street, while on the other side, Water Street was transformed into a New York street. Vintage cars and hot-dogs cars were also used to give the scenes a more realistic look.

We were thrilled to support @REDProductionCo on their visit to #FilmLiverpool🎥 as they transformed two streets into London 💂🇬🇧 & New York 🚕🇺🇸 pic.twitter.com/59ooqsTPsH

To add to the authenticity of the location, the team used a combination of 2D and CG VFX techniques. Here’s a picture from the show that depicts how the production team skillfully transformed the Liverpool streets into those in New York.

Other noteworthy filming locations include the University of Chester, Padgate Campus in Warrington. The protests scene was shot at Le Mans Crescent, located in Bolton. It is a prominent filming location, and several other shows like ‘Peaky Blinders,’ ‘The Strange,’ and ‘White Lines’ have been shot there. A few locations in Greater Manchester also served as a filming site, including Eccles Shopping Centre in Eccles and Jackson’s Boat in Sale. Several important scenes were filmed at Joseph Street, in Darwen, Lancashire.

Several cities in Wales were also used for shooting. Rhos-on-sea, in Conwy County Borough, was used to film the seafront scene with Valerie. The seaside town doubled up or the Isle of Wight. The walled market town of Canowy, located on the north coast of Wales, was also used for filming. Some scenes were also shot in Bangor, the oldest city in Wales.