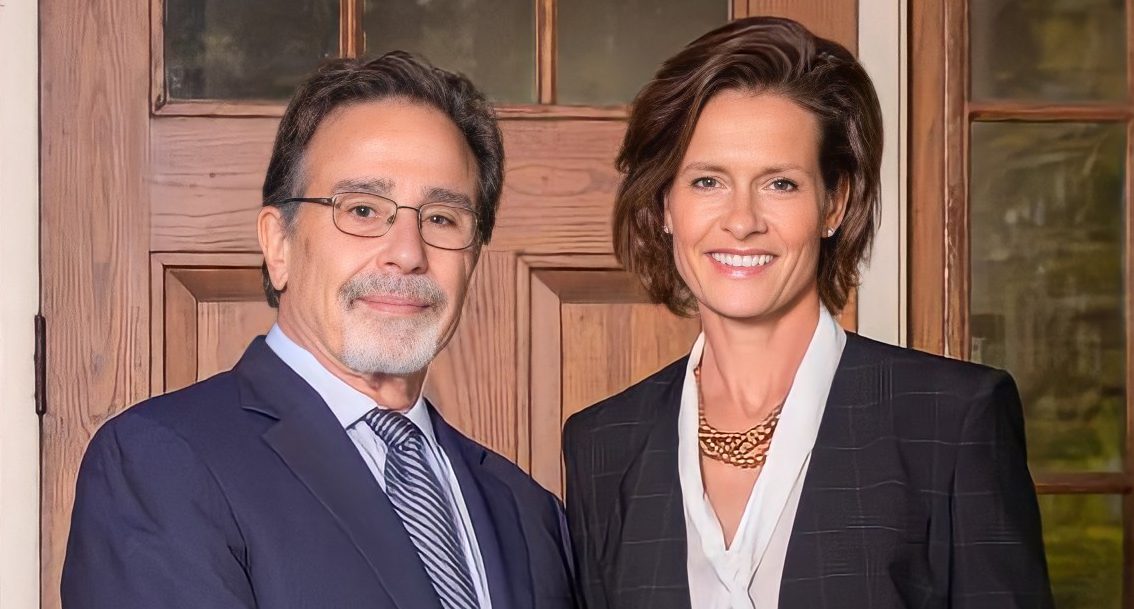 Inspired by a true story, HBO Max’s crime series ‘The Staircase’ centers around the murder of Kathleen Peterson, who is found dead at the bottom of a staircase in her home. David Rudolf becomes the lawyer of Kathleen’s husband, Michael Peterson, who eventually gets convicted for the murder of his wife. After two rejected appeals, Rudolf decides to step down as Michael’s lawyer.

In the sixth episode of the show, Rudolf informs that he is stepping down due to a personal concern, specifically for his marriage. If you are eager to know more about David Rudolf’s wife and their current whereabouts, you’re at the right place. Here’s everything you need to know!

Who is David Rudolf’s Wife?

Sonya Pfeiffer, a reporter who covered Kathleen’s death and Michael’s trial, is David Rudolf’s wife. At the time, Sonya was working for ABC11/WTVD and met Rudolf as Michael’s attorney. They eventually formed a bond that led them to their matrimony. In 2004, the year after Michael was convicted for killing Kathleen, Sonya enrolled at the University of North Carolina at Chapel Hill for a Juris Doctor degree and graduated in 2007. Rudolf and Sonya also got married in the same year, on May 5, 2007.

Sonya’s career as a lawyer began in the Mecklenburg County Public Defender’s Office, where she worked in both the Misdemeanor and Felony Drug Unit. She also worked in the business litigation division of Womble Carlyle Sandridge and Rice LLP (presently known as Womble Bond Dickinson after merging with Bond Dickinson LLP). In 2011, Sonya joined Rudolf Widenhouse, a law firm based in Charlotte, North Carolina, and started working alongside her husband.

The couple has a daughter named Zayne. Currently, Sonya is living in Toronto. In 2021, she received a work permit to practice law in the city and joined Brauti Thorning LLP. Her areas of expertise are criminal law and high stakes/high conflict civil litigation. Still, she continues her practice in North Carolina. Recently, she bought an art gallery named Elder Gallery of Contemporary Art with Rudolf and serves as the Owner and Creative Director of the same.

Yes, David Rudolf is still married to Sonya Pfeiffer. In 2021, the couple completed their move from North Carolina to Toronto with their daughter. “Our goal has always been to raise a child who has a sense of global citizenship—someone who makes the world a better place for others. We wanted her to have a sense not only of personal responsibility, but responsibility to other people. That message was not being reflected in the U.S., so we thought, ‘Let’s see what other opportunities are out there,’” Sonya told Toronto Life about their move to the city in an interview in October 2021.

As far as their connection is concerned, the pair celebrated their 15th wedding anniversary in May 2022. Marking the milestone in their relationship, Sonya shared an adorable picture of the two, alongside a heartwarming caption that read, in part, “15 years ago today we said I do. To each other, to adventure, to the exciting unknown. I never imagined our adventure would include celebrating 15 years by isolating from each other in separate countries, but then again, we’ve never really done things the expected way.”

“Thanks for rarely shooting down my crazy ideas, buckling in for all the rides, and squeezing every bit of life out of each day with me,” she added. On the occasion, David also expressed his affection for his partner. He wrote, “Happy Anniversary to my soul mate. You make me the best version of myself (and I’ve got plenty of people to back me up that one up). Here’s to what’s next.”

According to Sonya, her and Rudolf’s long-term plans are indefinite. “I don’t think we [Rudolf and Sonya] know what our long-term plans are yet. We’re taking things day by day. I still have my practice in North Carolina,” the lawyer told Toronto Life. “As long as I can continue my work there [North Carolina] and find purposeful work here in Toronto, we’ll be here,” Sonya added. Reports suggest they currently live in a rented house in a Toronto neighborhood named Hoggs Hollow.

Rudolf and Sonya work together at Brauti Thorning LLP and are seemingly still affiliated with Rudolf Widenhouse, presently also known as Pfeiffer Rudolf. The power couple are the co-hosts of a podcast titled ‘Abuse of Power,’ which focuses on the victimization of the people by law enforcement and the justice system. The couple regularly speaks at events related to crime and law together as well.

Read More: Was Larry Really Michael’s Neighbor? Where is He Now?