Will Tsukasa and Hyoga Die in Dr. Stone? 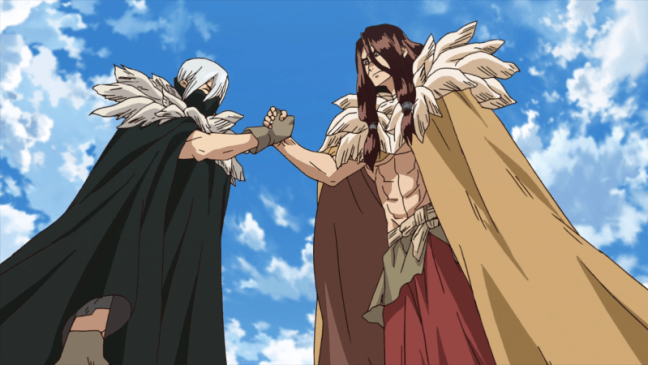 Developed by TMS/8PAN Studios, ‘Dr. Stone’ is a shounen post-apocalyptic science fiction anime show based on a Japanese manga series written by Riichiro Inagaki and illustrated by the South Korean artist Boichi. It tells the story of a world in which almost all humanity was petrified by a yet-to-be explained flash of light. 3,700 years later, science prodigy Senku Ishigami wakes up discovering that the world he knew and loved is gone. However, with the help of his friends and descendants of the astronauts who escaped petrification because they were in space at the time, Senku begins the arduous task of bringing the human civilization back.

But his views on humanity and science have their share of detractors, most prominent of whom is Tsukasa Shishio. He is the third person from the old world to be revived in the new one, after Senku and Senku’s best friend, Taiju Oki. Although he initially promises that he will protect Senku and those he revives, they soon realize that their views about the new world directly contradict each other. After falsely believing that he has killed Senku, Tsukasa establishes the Kingdom of Might. Hyoga is one of the first people that he revives.

Hyoga is almost as physically capable as Tsukasa and even more cunning and ruthless. The two of them make a fierce and nearly undefeatable team. If you have watched the penultimate episode of ‘Dr. Stone: Stone Wars,’ you might be wondering whether the two characters will survive after what happened to them and continue to appear in future seasons. Here is what we know. SPOILERS AHEAD.

Will Tsukasa and Hyoga Die in Dr. Stone?

No, Tsukasa and Hyoga will not die, that is, if the anime show continues to follow Inagaki and Boichi’s manga series. However, if the showrunners decide to go in a different direction from the source material, then there is a chance that the two characters will die in the upcoming episodes. But the possibility of this happening is almost non-existent.

Even though the showrunners have made minor and major changes here and there, they have, for the most part, followed the outlines set by the source materials. Killing two characters who are set to play important roles in future storylines is counterproductive and might cause the overarching plot irreparable damage. In ‘Dr. Stone: Stone Wars’ episode 10, Tsukasa gets impaled by Hyoga’s spear while protecting his newly-revived sister, Mirai.

He and Senku subsequently team up against Hyoga. Eventually, Senku takes Hyoga out by electrocuting him with his makeshift taser powered by manganese batteries. In the manga, Hyoga is subsequently put in a holding cell. Homura, another former member of the Empire of Might, is also detained by the Kingdom of Science. When Kohaku comes to give them their food, Hyoga declares that he knows that he has dealt a fatal blow to Tsukasa.

In response, Kohaku tells him never to underestimate Senku and his knowledge of science. Her words prove to be prophetic as Senku saves Tsukasa’s life by putting him to cryosleep. During the ‘New America City Arc,’ Senku revives him, and the former leader of the Empire of Might reunites with his sister, Senku, and others. In the intermediate period, Hyoga has also been petrified. At Tsukasa’s request, Senku brings back Hyoga as well.