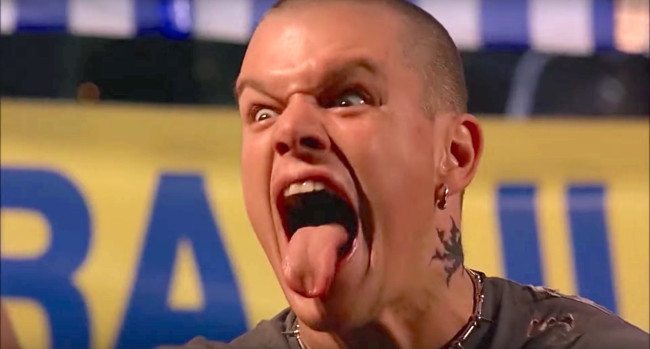 Some movie cameos are awesome. Some are dumb. Some are strange. Others, like the following, are strange for hilarious and/or bizarre reasons. Enjoy.

This Farrelly Brothers film stars Matt Damon and Greg Kinnear as (non-identical) conjoined twins. The silly premise is played out in some pretty funny ways without feeling mean-spirited. At the end of the film, the two brothers decide to have surgery in order to separate them. The doctor who appears, post operation is non-other than former U.S Presidential candidate and current Secretary of Housing and Urban Development, Dr. Ben Carson. Carson is now most famous for looking tired most of the time, speaking slowly and being, simultaneously, a talented brain surgeon and really, really dumb. The cameo is only strange now because of hindsight but it threw me for a loop.

In the Planet of the Apes movie that everyone would like to forget happened, Charlton Heston (star of the 1968 film) has a cameo as Zaius, a chimp elder who warns the apes’ general, Thade (played by Tim Roth) about the evils of humanity. All of this makes perfect sense right up until the scene begins. The crux of Zaius’ argument here is that humanity’s technology is their deadliest attribute and their worst quality; specifically: GUNS. Charlton Heston, the actor, was a long-time fire arms advocate and president of the National Rifle Association. If you’ve ever seen Michael Moore’s Bowling for Columbine, you may also know that Heston was a huge dick about it. He brazenly held NRA conventions in major cities that had recently suffered tragic shootings, which gained widespread attention. Despite everything terrible about Tim Burton’s remake, getting Heston to unknowingly make an ass of himself in full chimp make-up is worth a tip of the hat.

Mel Gibson is a man who clearly has some demons. Aside from the tabloid fodder about anti-Semitism and other drunken escapades, Mel Gibson clearly has a serious case of Catholic-guilt. He decided to make his Jesus movie by focusing on the last 12 hours of his life…… the part where all the torture happens. Mel also decided to have the dialogue spoken in 3 dead languages and originally didn’t even want subtitles included. Even for Mel Gibson, this was a little too crazy and in the end, he let us have those pesky words on the screen. Mel Gibson, not feeling guilty enough for J.C. doing him a favour by accepting the burden of sin, decided that metaphors be damned, he literally had to get his hands dirty. When Jesus offers Mary Magdalene his hand during the film, the hand we see is actually Gibson’s, not Jim Caviezel’s. Stranger still, during the crucifixion scene, the hands that hammer the nail into Christ’s palms are…. You guessed it; Mel Gibson’s. It wasn’t enough that he made a Jesus movie which makes SAW look like the Disney Channel. Mel decided that he had to nail JC to the cross, himself.

U.S. Senator Patrick Leahy really loves Batman. He has appeared in a slew of Batman films despite the disadvantage of having nothing to do with the character and not being an actor. He has appeared in films with every Batman from Val Kilmer to Ben Affleck. He cameoed in both Schumacher films. He was the elderly gentleman who reminded Heath Ledger’s Joker of his father during the banquet scene in THE DARK KNIGHT. He appeared again in THE DARK KNIGHT RISES and despite already appearing in 2 separate cinematic Batman universes, he decided that the third time was the charm when he again, showed up in Batman v. Superman. An appearance in this year’s JUSTICE LEAGUE would not be a surprise.

5. Stephen Colbert knows Tolkien better than anyone – THE HOBBIT: THE DESOLATION OF SMAUG (2013)

The host of The Late Show has a bit of a fascination with all things Tolkien. He constantly makes references to it on his show and even has a replica of Aragorn’s sword on his set. Because Colbert was able to best Philippa Boyens at a Tolkien trivia battle, he was invited to shoot a cameo for the 2nd installment of Peter Jackson’s Hobbit trilogy. He appears with his children as a Lake-Town spy. It’s a “blink and you’ll miss it” type of cameo but Stephen earned it. Philippa Boyens (the person he out-Tolkien’d) co-wrote all of Peter Jackson’s Middle Earth movies and was the resident Tolkien expert since the beginning. She actually lived in Middle Earth (New Zealand) for over ten years and Colbert was still able to claim victory over with his super-human level nerdiness.

In 1998, most people knew Bob Saget from ‘Full House’ and ‘America’s Funniest Home Videos.’ Those who knew him personally were aware of his unhinged vulgarity but the general public (me included) remained largely oblivious. In Dave Chappelle’s stoner comedy, Chappelle goes to an AA style meeting where he confesses he is addicted to marijuana. Bob Saget stands up in the crowd, berating Chappelle’s character by declaring marijuana isn’t a real drug. *PROFANITY WARNING* Saget proceeds to talk about the horrors of his REAL addiction by declaring that he used to “suck dick for coke.” If you were unaware of Mr. Saget’s proclivity for filth, this cameo hits you like a ton of bricks and makes you question everything you thought you knew.

7. Keith Richards dresses up like a pirate, refuses to stop being a rock star – PIRATES OF THE CARRIBEAN: FRANCHISE (2007-2017)

Johnny Depp freaked everyone out when he starting filming ‘Pirates of the Caribbean: The Curse of the Black Pearl.’ Depp did his thing and we all know how that worked out. Depp got his first Oscar nomination and has been playing Captain Jack Sparrow for the last 14 years. As many are now aware, Depp based his character, largely on Keith Richards of the Rolling Stones. Depp concluded: Pirates = Rock Stars. Keith Richards ended up joining the cast in subsequent films, portraying Jack Sparrow’s father. Makes sense. Richards, a rock star who was dressed like a pirate, acted like both on set. He played a vintage guitar and was stone drunk during filming. There are rumours that Sir Paul McCartney is going to cameo in this year’s ‘Dead Men Tell No Tales’ which is all kinds of insane and amazing. Johnny Depp with a Beatle and a Rolling Stone, all dressed like pirates. What an amazing world we live in!

This film features a cast of young adults traveling through Europe. There is a scene at the beginning of the film, featuring a punk band at a party. The band’s lead singer calls out the main character, Scott’s girlfriend as “The freakiest little sex puppet I know,” dedicating the next song to her. The song proceeds to mock Scott’s obliviousness to the singer and Fiona’s sex lives, culminating with the chorus (and title of the song) “Scotty Doesn’t Know.” The lead singer is Matt Damon with a shaved head, fake tattoos and piercings. He lip-sings the song on stage but sells the character fully. Hilarious and random.

Kevin Smith’s religious comedy features a brilliant ensemble cast, profound insight on theological questions, Jay & Silent Bob, and a rubber poop-monster. Alan Rickman plays the Metatron who acts as the voice of God for the duration of the film. The character of God is only revealed near the end of the film and it’s……. Alanis Morissette. She smiles, does some hand-stands, comforts the heroes and makes Ben Affleck’s head explode. She never says a word. Earlier in the film, Selma Hayek’s character, Serendipity, reveals that God is a woman but when she is revealed it was mind-blowing (not the same kind of mind blowing Ben Affleck got). Jagged Little Pill was apparently, bigger than the Bible.

Adam Sandler is now known for getting paid to take vacations with his friends in tropical locations. He used to make some decent films. Little Nicky is one where he plays the naïve, sweet tempered son of Satan. During a few scenes in the film, he encounters a street preacher with a thick “Baptist-preacher” accent who freaks the hell out whenever Nicky is near him (he’s blind so can’t see Nicky). This street preacher is non-other than Quinten Tarantino for some reason and…… It’s sort of brilliant.