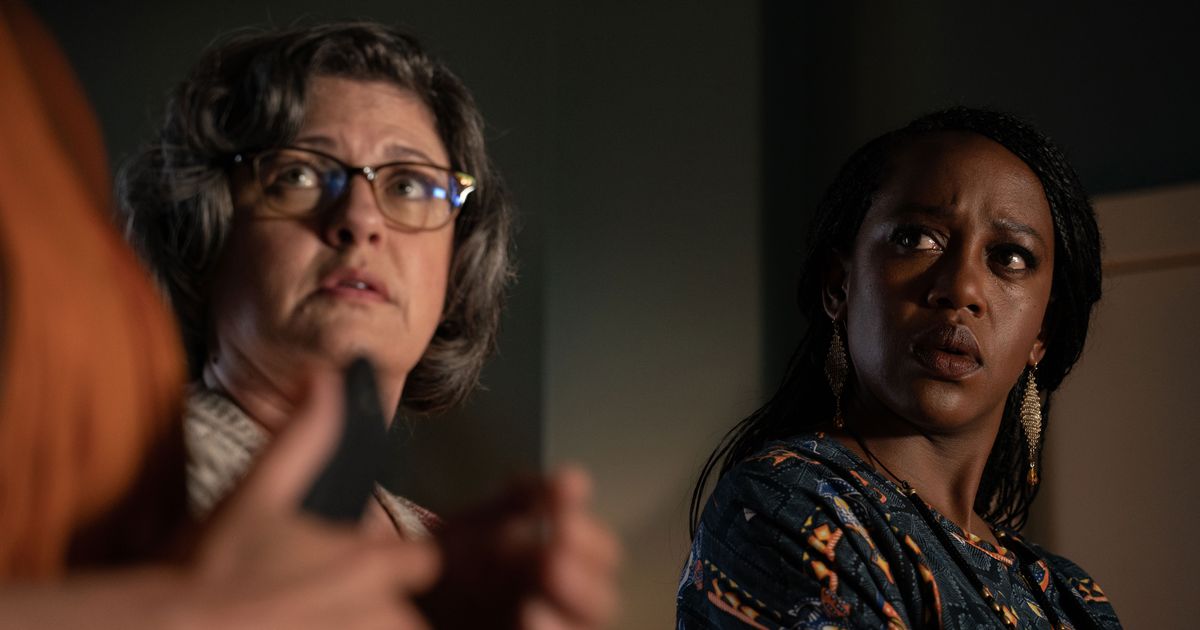 In ‘Saints,’ the 6th episode of the Showtime series ‘Yellowjackets,’ Lottie’s (Courtney Eaton) connection to the supernatural is all but established in 1996. Love and exploration are in the air for Travis (Kevin Alves) and Nat (Juliette Lewis as adult and Sophie Thatcher as teenager), which leads to an incredibly awkward conversation between the former and Coach Scott. Meanwhile, as the fear of pregnancy starts to take hold of Shauna (Melanie Lynskey as adult and Sophie Nélisse as teenager), desperate times call for desperate measures.

In 2021, Taissa (Tawny Cypress as adult and Jasmin Savoy Brown as teenager) and Simone take Sammy to see a therapist, but it is revealed that their problem lies elsewhere. It’s Jackie’s (Ella Purnell) birthday, and the Sadeckis have their annual lunch with the parents of their friend/former girlfriend. Here is everything you need to know about the ending of ‘Yellowjackets’ episode 6. SPOILERS AHEAD.

The episode begins with a flashback to Lottie’s childhood. She is in a car with her parents and has what seems like her first episode. Startled by her scream, her father doesn’t start the car even though the signal is green. Suddenly, there is a crash in front of them. Afterward, her mother thinks that Lottie can see the future, but her father believes that their daughter is mentally unwell and decides to take her to a therapist. In 1996, Lottie sees a deer with bloodied antlers. And later, she catches Taissa eating dirt in the forest. No one else sees the deer, and when she speaks to Taissa, the latter appears to be dismissive. As medicine isn’t there to curtail her delusions, she turns to faith. This leads to Laura Lee baptizing her.

Between the guilt of having slept with her best friend’s boyfriend and the prospect of having a child in the middle of nowhere, Shauna struggles with her secret and sense of mortality. She tells Taissa the truth and later decides to abort the fetus with an underwire from a bra. Taissa offers her help, but Shauna ultimately doesn’t go through with it.

In 2021, Shauna and Jeff have lunch with Jackie’s parents. Jackie’s mother constantly belittles Shauna, prompting Jeff to eventually defend his wife and revealing that he and Shauna started having sex when he was still with Jackie. The episode draws a parallel between the development of Nat’s relationship with Travis in 1996 and with Kevyn in 2021.

Yellowjackets Episode 6 Ending: Who Is the Woman in the Trees?

This episode makes a startling revelation by heavily insinuating that Taissa is the woman that Sammy has seen in the trees. In 1996, when Lottie sees Taisa eating dirt, we presume that this is another of her schizophrenic delusions. But then, towards the end of the episode, one of the terrifying moments of the first season takes place. Taissa seems to be in a trance. Her hand is bleeding, and there is dirt all around her mouth. She regains her senses when her phone starts to vibrate, reminding her that there is someone blackmailing them and they are setting up a trap for whoever it is.

It seems that Taissa had these blackouts even in the early days when they became stranded. It is even possible that it predates the crash. When they are bathing together, Van observes that there is dirt in Taissa’s fingers. These episodes are probably triggered when she is under extreme stress and doesn’t seem to have any recollection of them when she gets out of the trance. Taissa is probably the one who wrote the word “Spill” on her door in blood-red paint and then left the container in Sammy’s room. These deeply rooted issues have persisted within her throughout the years. Given her skeptical views on therapy, she likely never reached out to anyone for help.

Does Lottie have Visions or Is She Mentally Ill?

Episode 6 provides an alternative explanation for Lottie’s visions that is different from schizophrenia. It sets things up in such a way that makes us consider the possibility that Lottie might have the gift of premonition. Travis and Nat kill the deer with the bloodied antlers, which Lottie initially thinks doesn’t exist and is part of her delusions. When Shauna cuts open its belly, the stranded group discovers that it’s filled with worms. For the first time in her life, Lottie starts to believe that she isn’t mentally unwell and draws courage from her newfound faith.

Who Is Jessica Roberts? Why Does Misty Kidnap Her?

Jessica Roberts has been hired by Taissa to find out who among the survivors spoke to her opponent. As the story keeps evolving, it’s very much possible that Taissa herself called her opponent with the information and just doesn’t remember it. All the survivors are acutely aware of how dangerous Misty (Christina Ricci as adult and Sammi Hanratty teen) really is and actively try to keep her out of their lives. It seems that Taissa apparently hadn’t explicitly warned Jessica about Misty, which leads Jessica to carelessly walk into a trap that Misty has set up for her.

Jessica is sedated and brought to Misty’s home. When she wakes up, she finds herself restrained and gagged in the basement. Understandably, she is terrified. The young Misty in 1996 seems to have this unsettling curiosity and cruelty of a serial killer in the making. She likely perfected her methods in those 19 months. She likely has kidnapped Jessica for information about the sender of the postcard and might not kill her. But the experience is bound to terrify the fake journalist, and she might stop the investigation.