‘2001: A Space Odyssey’: The Most Important Movie Ever Made

Life is a mystery, there is no doubt about it. Of course, we have had scientific theories and postulations, but they have never been definitive. And since time immemorial, human beings have been on a quest for answers; answers to all the mysteries surrounding our existence and our future. Despite 8 million years of civilization, we still don’t have all the answers, and I don’t think we ever will. But, that has never stopped us from asking questions. I for one, often wonder about the existence of complex life in the universe other than ours. And, if there indeed is alien life, would they be more advanced living systems than us? And if so, have they been leading the way for us, without us even knowing; something like a “God”? It may seem far-fetched even by science fiction standards, but think about it a little, and the possibilities are infinite and endlessly fascinating. 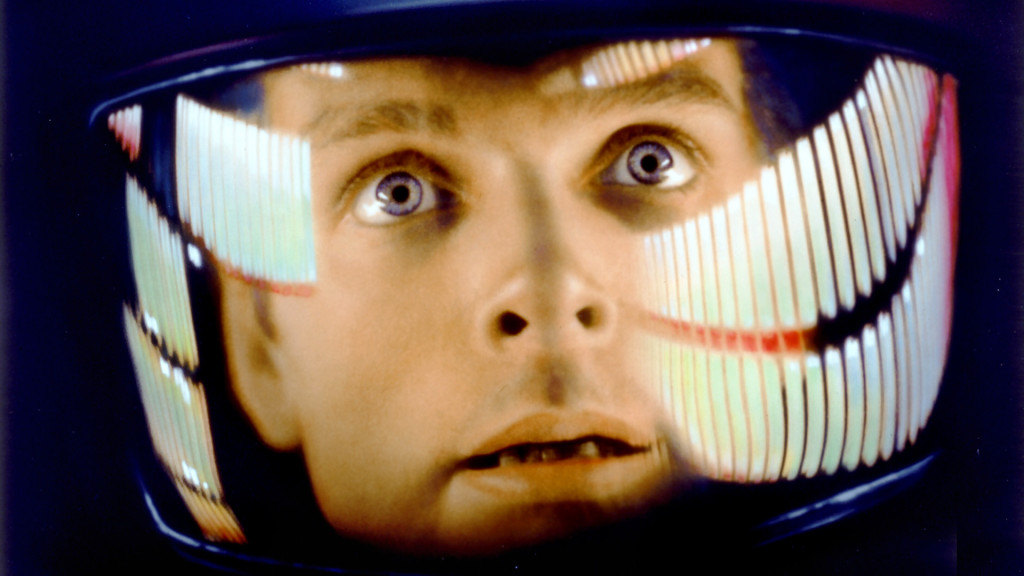 Art and cinema, in particular, have often explored these ideas of life and existence with varying degrees of success. Movies like ‘Prometheus’, ‘Contact’ and to a small extent ‘Interstellar’ touch upon the idea of an advanced life form guiding us through our evolution. But the fact remains that while these movies are fascinating, none of them have successfully managed to display the scale and absolute magnificence of the ideas they promulgate.  In fact, it is nearly impossible to do that, since that would require complete abdication of the human element from the art, as a means to rise above it, to portray something greater than life; something beyond our comprehension. As I said, it is impossible, and yet that is exactly what ‘2001: A Space Odyssey’ does!

When the first screening of ‘2001: A Space Odyssey’ was held back in 1968, audiences walked out expressing disgust and chastised the director’s indulgence and lack of a narrative structure. Critics hated it and many even called it the worst film ever made. Even the ones who loved it didn’t know what to make of it. Looking back, the response isn’t surprising considering the fact that the movie broke every rule there is to break in cinema. Portraying two major turning points of human evolution over millions of years, the movie has no tangible plot, no characters, and no emotional arc. What then made the movie so great? Why does it turn out to be the experience of a lifetime? The answers aren’t so simple.

A mysterious black monolith suddenly appears before a group of man apes, in the midst of a confrontation with a rival tribe. The monolith mysteriously guides them into using a bone as a tool. Millions of years later in 2001, a similar monolith is discovered on the moon. A journey ensues across time and space in attempt to understand the message behind the monolith and what it signifies. This is the plot stripped down to the bare minimum, but it isn’t so straightforward. The pace is excruciatingly slow and the narrative basically non-existent, which actually works here. The portrayal of something that is actually too huge to comprehend should not be easy to decipher, and Kubrick’s writing and direction makes sure that the viewer is left baffled. There are very few dialogues; and even when our characters speak, it is usually short and cryptic.

If there is one aspect of ‘2001: A Space Odyssey’ that could be unequivocally praised, it is its technical prowess. With viscerally stunning visuals, long takes and an accurate depiction of space travel, the sheer beauty in the imagery will blow you away. I watched the movie only couple of years ago, yet I have never been more mesmerized by any movie in my life. For a movie almost half a century old, it goes on to say a lot about its scientific accuracy and attention to detail. The cinematography is ground-breaking; Geoffery Unsworth manages to capture the miracle of the universe with absolute perfection. The screenplay by Kubrick is radical; despite breaking all the rules of conventional screenplay, it manages to create something so great that deciphering its philosophical underlings is not easy. The movie, basically has everything that is usually derided, but the same qualities are what makes it so powerful.

Like most technical aspects in the film, the music too is quite unconventional, to say the least. For a movie with sparse dialogue, the music contributes a lot to the narrative. But unlike conventional cinema where music has a dramatic quotient and drives the story forward, the music here complements the eerie stillness and slow pace. The sequences with dialogues have no music and the silences are long and nerve-wracking.  The tracks are quite singular, without any flourishes — which not only contributes to the movie’s texture, it enhances it. The decision to use classical music was a masterstroke by Kubrick as it exemplifies the grandeur and magnificence of the visuals. The classical pieces were inserted with such precision that it almost seemed the spaceships and the celestial bodies were choreographed to the music. The iconic theme track is so brilliantly used by Kubrick that it gives me the creeps every time I hear it. This is arguably one of the finest soundtracks in a movie. Period.

There are many themes and ideas that the movie explores; some of them are quite obvious, some not so much. The black monolith could most definitely signify the presence of an extra-terrestrial life. In a brilliant display of Kubrick’s intuitiveness, the movie never shows an extra-terrestrial entity. This manages to keep the mystery behind the monolith intact; an advanced life form could easily be able to break the conventions of space-time and gravity, existing as a formless, spaceless entity. The black monolith appears two times, both when human life is at the cusp of evolution; it could imply that we have always been guided by advanced life forms.  The “star gate” and “star child” sequences are the more mind-bending allegory the movie put forth, which is sure to mystify audiences on the first watch. The monolith leads man into something which cannot be explained, something beyond our understanding. It is a visual metaphor signifying ultimate knowledge, something transcending all our understanding of the universe; about our past and our future as a civilization. And in turn “star child” could mean someone who has gained that ultimate knowledge, or in religious terms, a prophet!

Beyond all the religious allegory and philosophical underlings, the movie also manages to give us one of cinema’s greatest villains, which incidentally isn’t human. The HAL 9000 computer powering the spaceship following the monolith’s signals, said to be the most advanced AI ever made, becomes self-aware. For a movie which portrays scientific, technological and philosophical advancement, ‘2001: A Space Odyssey’ offers a damning critique of the advancements in artificial intelligence, in turn it gives us a display of the double-edged nature of technology. In a testament to Kubrick’s writing prowess, Hal, with only its voice and a red camera eye, manages to create more impact than most human characters in cinema.

What Kubrick managed to create with ‘2001: A Space Odyssey’ is pure, unbridled visual poetry. Sure, it isn’t easy to understand, and for that same reason I never tried to understand it. I let it wash over me, and was surprisingly moved. It is unusual, especially when there are no characterizations or emotions to soak up, but then there is nothing usual about the movie. I was moved by the spectacle I was witnessing: a spectacle spanning millions of years, something which showed how small we are in the grand scheme of things. Life is all about finding answers, and while ‘2001: A Space Odyssey’ doesn’t answer any, it makes us want to ask questions. And that is exactly what the movie made me do; it forced me to revisit my notions of science, philosophy and religion. I am an atheist, but the movie made me revisit the idea of God; the idea of someone or something guiding us. That is what science is about; it asks us to never to be satisfied; never to stop asking questions. And in a way, despite being a science-fiction movie about an advanced alien guiding humanity, the movie is also a critique of organized religion, where it is encouraged not to question the status quo, whether it is regarding faith, culture or tradition. Of course you will never have all the answers, but that does mean you should ever stop questioning. That is what the universe teaches us. That is what ‘2001: A Space Odyssey’ teaches us.

Cinema is probably the most manipulative art form ever — it uses basic human emotions to evoke a response from the viewer. But Stanley Kubrick, through his non-verbal style in ‘2001: A Space Odyssey’, manages to break any barrier there is in art; the movie connects directly with your subconscious, both metaphysically and philosophically. There is no pretense, no artistic flourishes; everything is stripped down, displaying art at its purest. When ‘2001: A Space Odyssey’ released, nobody had ever seen anything like it before. 48 years have passed; and we are yet to see anything like it since. Art is subjective; so as such there can never be one greatest film. But I don’t have any qualms in proclaiming ‘2001: A Space Odyssey’ as the most important film ever made. I don’t think anybody can argue with that!