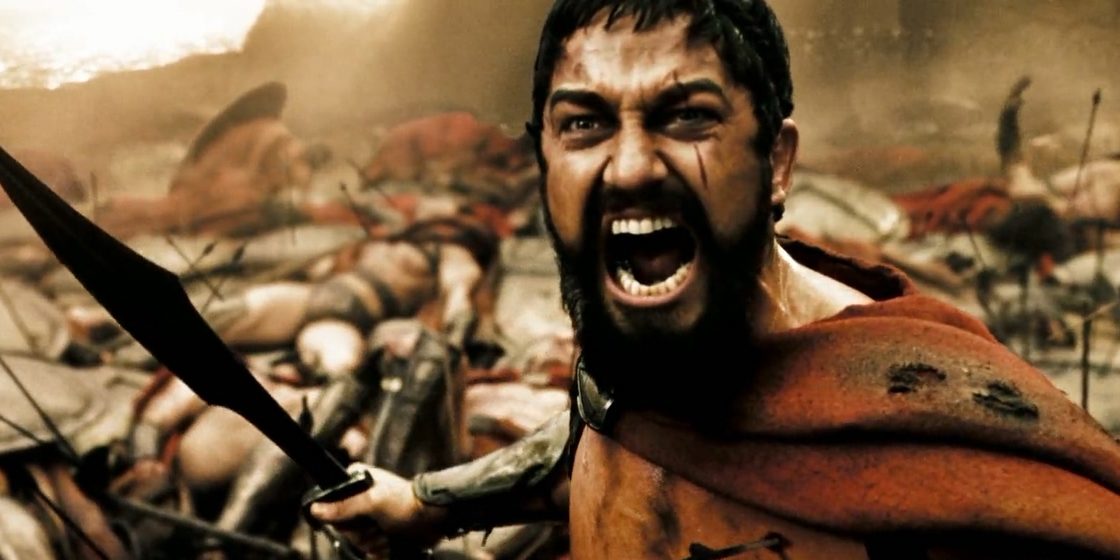 The Spartans lived their lives to serve in the war, and a glorious death was the preferred choice over cowardly submission. Zack Snyder adapts the famous graphic novel by inker and novelist Frank Miller for the screen in the enthralling 2006 war movie ‘300.’ The story follows Spartan king Leonidas (Gerard Butler) and his fearless troop of three hundred as they march to the Hot Gates to defend their kingdom.

The enemy is the formidable battalion of the Persian Empire, led by godly King Xerxes. The ending of the historical epic movie is decidedly gory and tragic, but there is a ray of hope. Do the Spartans win the war? Allow us to recollect the final moments from close quarters. SPOILERS AHEAD.

Dilios, a hoplite soldier late in the Greco-Persian War, tells how King Leonidas unleased a beast about a year ago, in the battle of Thermopylae (or the battle of Hot Gates). Past snippets recollect Leonidas’s upbringing, from his rigorous life in the agoge to ascension to the throne. A troop of Persian messengers reach the court and ask for earth and water as tokens of submission to King Xerxes. Leonidas does not like the tone, and the messenger and his party of archers go into a potentially bottomless well.

Leonidas visits the Ephors, prophetic inbreds who must keep the oracle drunk. The king’s plan entails luring the enemy into a narrow strait called the Hot Gates. The oracle states that Greece will fall if they do not respect the celebration of Carneia. But Leonidas does not care much for the concerns of the council. With some boost from the Queen (and wife) Gorgo, he casually ventures out north with 300 of his best warriors as “bodyguards.” The movie tells the story of their mighty defeat and victory against the Persians.

300 Ending: Is Leonidas Dead or Alive? Does He Submit to Xerxes?

After surviving the horde of magical creatures, the Spartans seem invincible. Their formation seems unbreakable. While some of the soldiers die on the battlefield (including the son of the General), their spirit remains strong as ever. After the betrayal of Ephialtes, however, the Arcadians lose several of their soldiers. The Persian army attacks the garrison at night. Arcadian General Daxos comes to deliver Leonidas and the Spartans the devastating news. The Arcadians retreat, but a Spartan does not know how to flee the battleground.

But by the third day of the war, the Persians have surrounded the Spartans, with some help from Ephialtes. Leonidas prepares the remaining soldiers for one final blow. In the final sequence, Xerxes meets Leonidas, asking him once more for submission. Ephialtes comes out of the crowd to speak on behalf of Xerxes. Leonidas opens his Corinthian helmet, drops his shield on the ground, and his spear is next to fall. He kneels before Xerxes, and we think of the act as Leonidas’ submission for a moment. 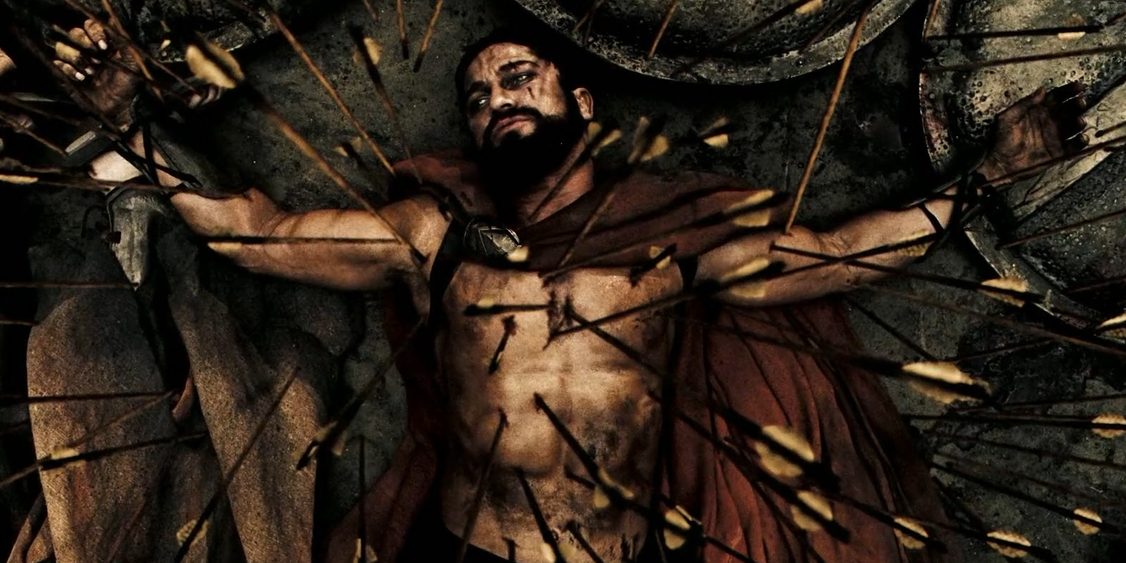 But let us not be naïve, viewers. We both know that Leonidas is not the king to submit to an enemy. It turns out that he frees his head only to make his vision clearer. His shield is weighty and obstructs him from hitting a far-off target. As Leonidas kneels, Stelios kills the arrogant Persian General. Leonidas picks up his spear and aims for Xerxes. Although he misses the head by inches, Leonidas manages to wound Xerxes. After the act, Xerxes can’t allow the Spartans to leave the battlefield alive. Persian soldiers growl, arrows rain on the Spartans, and an ending shot (akin to a mural) unveils King Leonidas as dead, along with his army.

Do The Spartans Win The War?

King Leonidas and the troop meet some Arcadians and other Greeks on the way. They expected more soldiers from the Spartan side. But the vast Arcadian army comprises people from all walks of life, whereas the Spartans are warriors from birth. Meanwhile, the Persians have summoned beasts from the darkness, and the day of the reckoning has seemingly come. When a Persian General comes their way, he is greeted by Stelios and Daxos. When the General sees the Phocian wall made of rock and Persian scouts, he threatens Stelios that he will die by noon, but soon after, Stelios slays him. The Oracle also previously states that Greece will fall. So, do the Spartans win the war?

Thankfully, Leonidas sends much of the troops back to the council to prepare to fight the war in the coming days. Dilios loses his eye in the battle and this hinders his ability to fight. Thus, Leonidas sends him back to the city-state as the messenger. Although the king and pretty much everyone can guess their final fate, Leonidas tells Dilios to tell the council about their victory. As Dilios narrates the story to his fellow soldiers, he says that the words of Leonidas came to him as cryptic. But now, a year following the death of Leonidas, Dilios assures that he now understands the meaning behind Leonidas’ confidence.

Although Leonidas has died on the battlefield with the most gifted of his soldiers, his bravery has given hope to Greece. He has shown the kingdom that the Persians can be defeated, and in the final sequence, Dilios and the Greeks head to the Battle of Plataea, the last land battle in the Greco-Persian Wars. 10,000 Spartans headed by Dilios vanguard the 30,000 free Greeks into war. Leonidas and the 300 become a myth, remembered by the Greeks as a symbol of strength and determination against adversity.

What Happened to The Real Xerxes? Was Xerxes Really A God?

Xerxes claims to be a God, asking the Greeks to bow down before his divinity. He comes off as a benevolent tyrant, but a tyrant nonetheless. When Leonidas rejects Ephialtes, the hunchback Spartan joins hands with the Persians. He goes to the Persian war tent to spill the secret of the other path before the king. The king shows Ephialtes a hedonistic life, enough to win command over Ephialtes. Xerxes also has the power to summon the “beasts from the darkness,” the soulless fantastical creatures who unleash hell on earth. With the mighty army, Xerxes may as well think of himself as God incarnate.

While Xerxes’ words may come off as obstinate in the day, kings always speak in lofty and condescending tones. The religious association is not unnatural since the Persian Empire had the concept of “Khvarenah,” which refers to the idea of a divine mystique force aiding the ruler. The name perhaps arrives from the early Mesopotamian culture where kings like Shulgi of Ur were revered like deities after their deaths. The concept, which translates as the “glory,” also has a second meaning, that of “good fortune.” 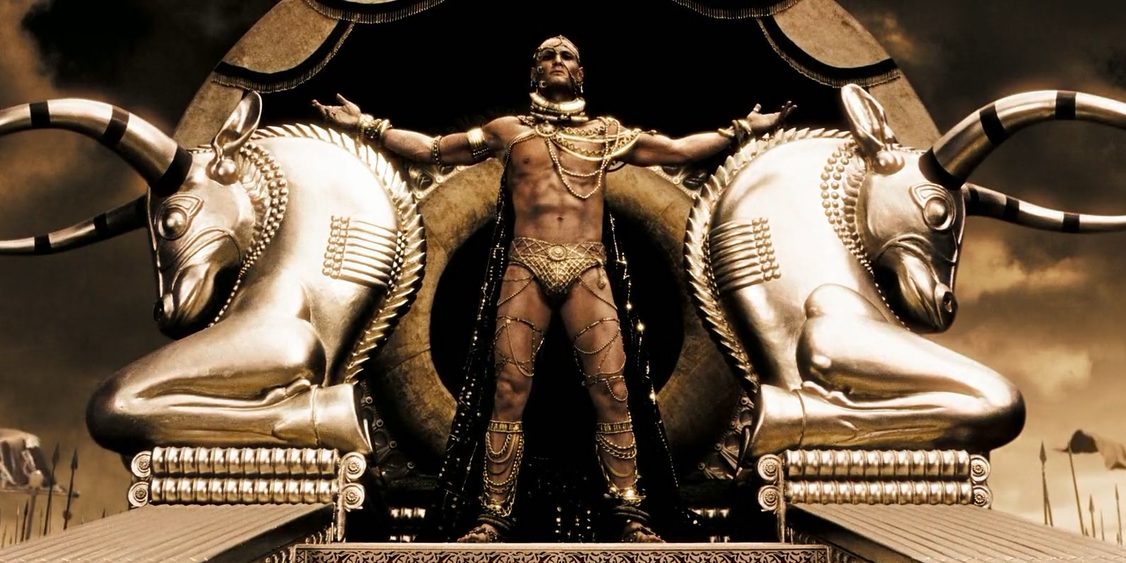 Coincidentally, Xerxes does not die in the movie due to sheer fortune. Leonidas seemingly aims for the head of Xerxes, but he misses the target. The king lives to see another day, and history tells us that he would go on to burn Athens after the Battle of Thermopylae. After capturing Athens, Xerxes would have control over the entire mainland Greece. However, his victory was short-lived, as Greeks retaliated in the Battle of Salamis.

According to Herodotus’ account, Xerxes retreated to Asia, fearing the Greeks would trap his army in Europe. Another reason for his return was the growing unrest in Babylon, which was a key province within the Persian Empire. However, when Leonidas’ spear wounds Xerxes, we see him bleeding. The injury proves that Xerxes is no king. When the myth is shattered, the Greeks gather all the more courage to defeat the Persians on the battlefield.