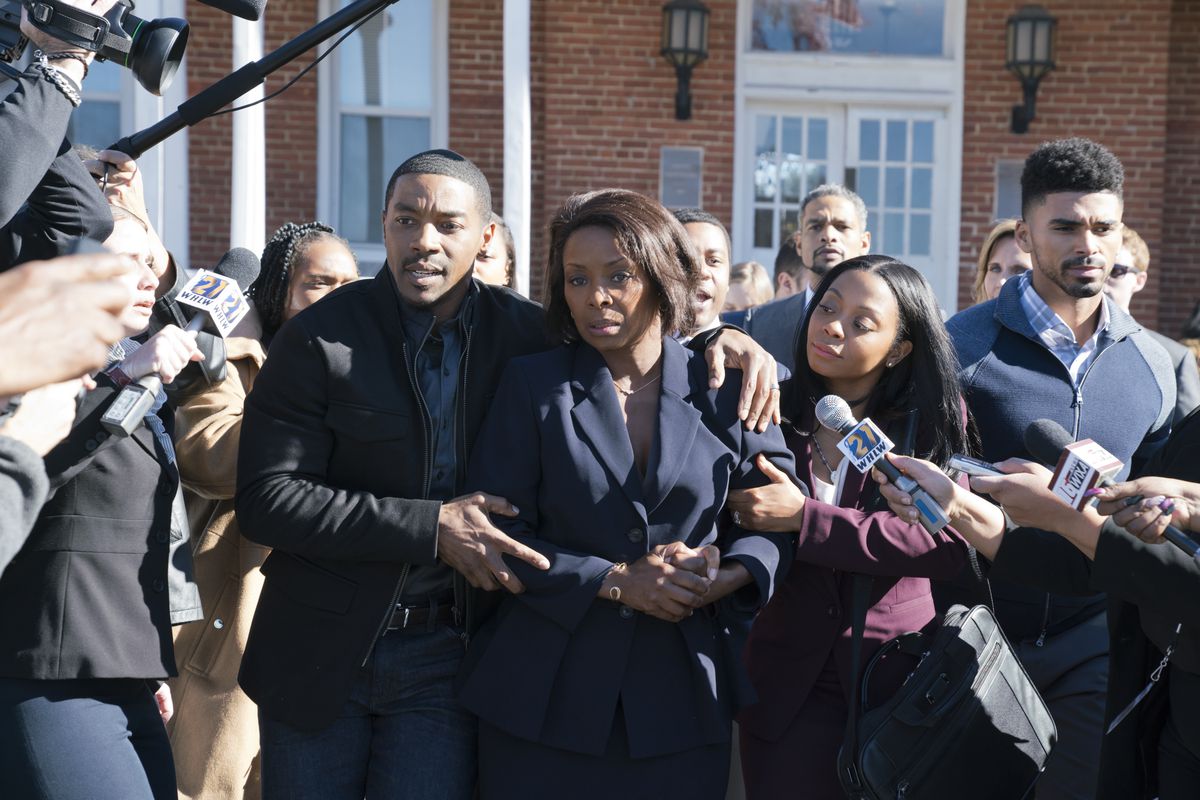 ‘A Fall from Grace’ marks Tyler Perry’s entry to the impactful and relatively new domain of Netflix. Perry is widely celebrated as one of the most influential and successful media personalities of our time. He is known to venture into new terrains and master them all. This can easily be seen with the diverse and significant work he has done on cinema, television and stage, while also having written a successful n0vel. Perry has worked intensively in bringing forth Black narratives, and creating content surrounding people of colour. With ‘A Fall from Grace‘ he does this particularly well with the film’s strong female leads, who are women of colour, and of course, their stellar performances.

The film ends up being a refreshing thriller despite all the tropes it makes use of because of the cast and crew involved. This provides a unique lens to the otherwise clichéd and somewhat flawed feature that was clearly made in a rush. Even in today’s day and age, there are hardly any films in the thriller genre that are run entirely by women, let alone women of colour. Along with this, and despite its flaws, ‘A Fall from Grace’ manages to surprise its audience with all of its audacious twists, leaving the biggest of them for the end. SPOILERS ALERT! 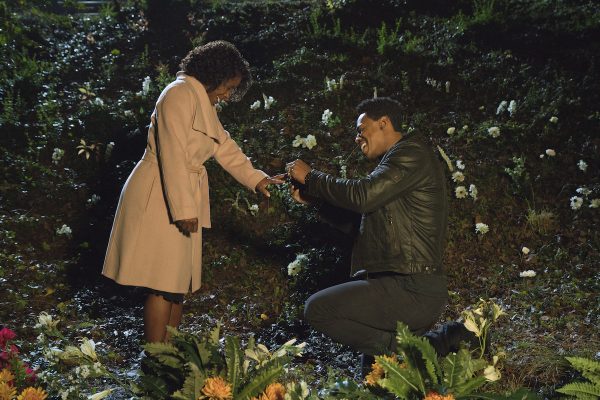 Jasmine is given the case of Grace Waters who is accused of killing her husband, Shannon, and takes it reluctantly. Though she is meant to work on plea deal for Grace, after her interactions with the woman, Jasmine soon realizes there is more to the case than meets the eyes.

The flashbacks take us to Grace’s tragic story as she speaks of her divorce and loneliness. Her best friend, Sarah Miller, helps her get back on her feet in the department of love. Grace eventually meets Shannon, a photographer, at a gallery, and the two feel an instant spark. Despite her initial hesitance, Grace completely falls for Shannon, who is kind and a complete gentleman. Soon the two get married, and it seems like the happiest time for Grace.

But things take a dark and dramatic turn as she loses everything she worked on all her life and is framed for stealing hundred thousands of dollars and also discovers a mortgage on her house of nearly the same amount. She realizes that someone has stolen her identity, and soon discovers that it’s Shannon. Despite seeking help, she is continuously harassed by the man who doesn’t leave, and an impulsive moment, bashes his head with a bat. Interestingly, there is never a body found.

Jasmine who is haunted by her own ethical dilemma begins to question her purpose as an attorney. Convinced about Grace’s innocence, she decides to defend her. But this becomes risky as it is her first time defending a client and an unfortunate mistrial leads to Grace being proven guilty, and convicted for murder. Despite this, she fights all odds to get to the truth.

The Ending: The Big Twist 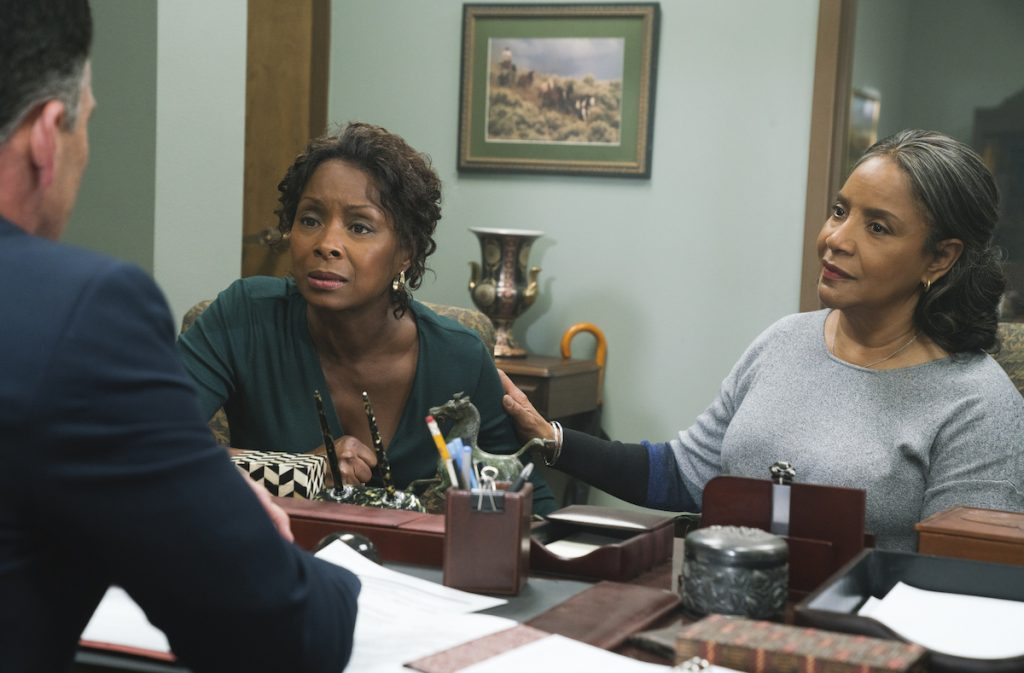 The big twist in ‘A Fall from Grace’ is revealed to us bit by bit as each of the characters gradually figure the different aspects of the truth. Grace is the first to crack the case when she sees Sarah wearing the Uzzo necklace Shannon was wearing the first she met him at the gallery.

Looking back at her relationship with Shannon, she suddenly realizes that Sarah was a major part of it. Not only does Sarah ask her to go to the gallery, she also drives her to their dates, often reassuring her that she needs to let herself feel loved. Even when she begins to get harassed by Shannon, Sarah is always present, of course, as a “friend” to Grace. She also realizes that Shannon was always photographing her when she was around her laptop, which is how he gets access to her personal information.

The second major reveal takes place as Jasmine decides to go pay Sarah a visit. Once there, she meets the weird old lady who says certain odd things to her, about how this isn’t her house, and she doesn’t want to go back. Finally, the old lady suddenly remembers her address, and Jasmine cracks the entire case open. During a conversation with Grace before her trial, Grace revealed how she had gone to the address because it was the notary through which the mortgage took place. But it turns out to be an abandoned house.

We learn that the owner of the house, A. McKathy, is actually Alice, the old lady. Alice speaks of how she doesn’t want to have the same fate as the others who lived there, and includes a bunch of names which includes Shane, the lady who jumps off the roof in the first scene of the film. The scene suddenly connects to the larger narrative and we learn that Shane was actually a photographer, that Shannon took over her identity, and the photos in the exhibition were also hers.

Jasmine looks around the house and discovers several old women in a desolate condition, all whom are kept chained as prisoners. She realizes Shannon is alive as he tackles her and ties her up, and soon we get the big revelation that Sarah and Shannon are mother and son. This builds an immediate connection to all the times Shannon speaks of his mother.

“It Ain’t Over”: The Con Continues

Jordan realizes something is wrong when he learns that Sarah has changed her identities in the past and heads to her place to save Jasmine. He finally finds her, but Sarah manages to run away. We realize that Alice runs away from the building as well. As he is trying to help Jasmine, Shannon attacks him. In an impulsive attempt to save herself and Jordan, Jasmine shoots him.

The scene shifts to media covering the incident, as all the old women that were trapped inside finally get released and walk free. The journalists reveal the history of the whole scam that the mother-son duo were operating. We learn that Shannon’s real name is Maurice Mills, while Sarah is actually Betty Mills.

The duo had been kidnapping elderly women and taking their wealth, holding them hostage for their social security. Maurice is wanted in 9 states for crimes that include bigamy and racketeering, along with several other crimes. He is also wanted in several states for conning over 16 middle-aged women. This horrendous scam operation has been taking place for over 25 years, with the duo stealing several millions from their victims.

All of this connects to Sarah’s (Betty) previous interactions with the other characters, particularly, Jasmine, especially as she mentions how she is the caretaker and landlady of the old women who live in the building, and calls Alice her tenant. It also becomes eerie in retrospect as we realize we never see any of the tenants from the building except Alice, who is in such a bad condition that she looks like a ghost.  Sarah feeds these women keeping them alive for the social security. We also hear her talking about serving breakfast to the women, but in retrospect we realize this is exactly why she gets rid of Jasmine almost immediately.

In light of the new evidence on the scandal, the state apologizes to Grace Waters and removes all charges from, making her a free woman. Jasmine gets praised for uncovering the scheme and saving the lives of all these women. But there is still no information about where the all the money went, and we realize that Sarah (Betty) is still on a run. When a journalist asks Grace if she’s glad it is all over, she answers by saying that is not.

The scene then shifts to Sarah, having changed her identity, in another place, talking to a young woman about her experience in taking care of the elderly. We realize that the con continues as she finds herself another victim, LuAnn, who she will be the “caretaker” of. She casually asks the daughter about LuAnn and we realize how she carefully preys on her victims based on their wealth and connections. LuAnn worked with a financial institution just as Grace worked with the bank. With the way the feature ends, we can certainly assume that the scamming operation is far from being over.