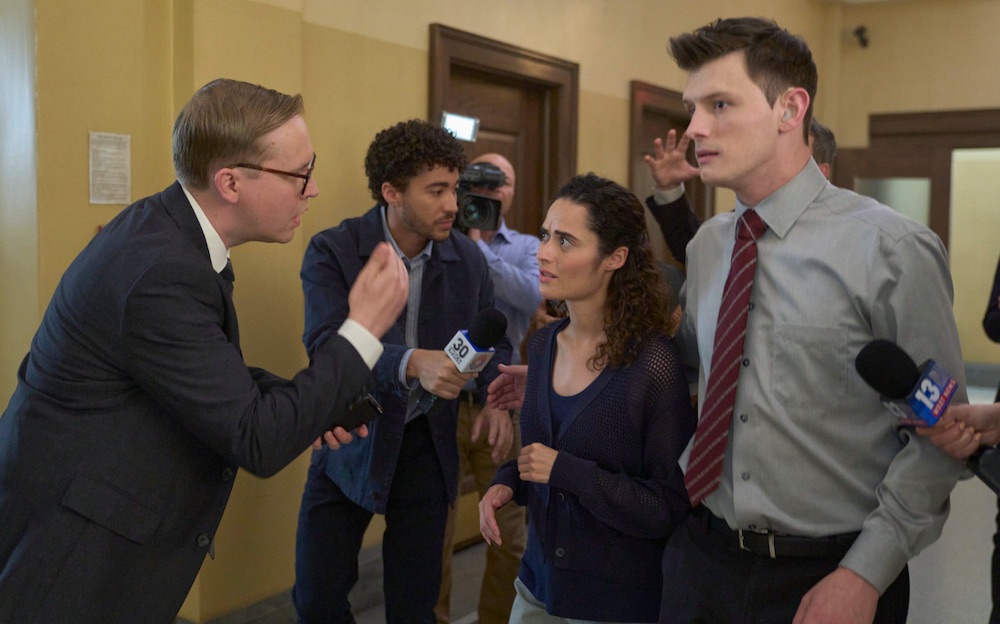 The second episode of ‘Accused’ follows the story of a woman named Ava who finds herself turned into a criminal following her role as a surrogate for another couple. The episode looks at a very sensitive issue from Ava’s point of view and makes the audience question their own beliefs on the matter. The viewers become the jury and they have to decide whether Ava should be given a guilty verdict for her actions. While things seem straightforward in the beginning, the flashbacks reveal a backstory that changes our perspective toward her. Here’s a breakdown of all that happens in the episode and what the ending means for Ava. SPOILERS AHEAD

Ava is a deaf person, and she is the surrogate mother of Jenny and Max’s child. The relationship between the parents and the surrogate is very loving and there is a sense of understanding between them. However, things change when the baby is born and revealed to be deaf. This comes as a blow to Max, who is a musician and wanted his child to go down the same line. Because the baby, christened Lucie, is deaf, it completely destroys all of the hopes and dreams he has for his child. They want their daughter to have a normal life, so they decide to get her cochlear implants at a young age.

Ava, on the other hand, believes that the choice should rest with Lucie and that her parents shouldn’t go forward with the surgery. When she realizes that they have no intention of changing their minds, she takes a drastic step to ensure Lucie’s safety. She kidnaps her and plans to find a legal loophole that will allow her more rights as her surrogate mother. However, things don’t turn out in her favor and she finds herself in front of a jury trying to prove her innocence in a case that appears to be very clear-cut.

As a deaf child, Ava didn’t have an easy life. When she was two, her father walked away, never to return. Her mother blamed this on Ava and her deafness, refusing to love her or even show any shred of empathy towards her daughter. Over the years, Ava found it difficult to express herself and became a butt of other children’s jokes. Eventually, she was enrolled in a school for deaf children, she learned sign language and found her community and culture which enriched her life. When she found Lucie in a similar environment, with a father who didn’t want a deaf child, she felt like history was repeating itself.

For all that Ava had suffered as a child, she didn’t want the same thing to happen to Lucie. She advised Jenny and Max to not go through with the implants, because not only did it take away their child’s chance to choose for themselves, but it also felt more like mutilation. They were forcing Lucie to be someone she wasn’t, and Ava knew that such pressure from parents could damage a child. Seeing that the couple might not want Lucie anymore, she started to find ways that would allow her to become Lucie’s legal guardian. Through her lawyer friend, Ava found out about a case where a surrogate mother ran away with the child to a different state where laws were in her favor, allowing her to become the child’s legal mother. Ava wanted to do the same, but then she discovered that the other woman’s case was very different than hers.

When Ava realized that she’d committed a crime and there was no legal loophole that could help her out of it, she found it best to surrender. She gave Lucie back and was arrested for kidnapping and child endangerment. Despite this, she maintained that she never meant to harm Lucie and was actually trying to save her. Her lawyer advises her to take the plea deal which would reduce her sentence to two years, but she remains steadfast in her belief that she is not guilty of anything. The case goes to trial and when her lawyer struggles to paint her in a good light, he gives the case over to another lawyer, who is also deaf.

The change in representation works miracles for Ava, who is told that the jury needs to hear her story in order to understand the reason behind her actions. If she tells them their real motivation, they might be moved to reconsider the opinions they’ve already formed about her by now. With the lawyer’s help, Ava succeeds in making her point. She talks about her own childhood and how the negligence of her parents and their unwillingness to understand her or even empathize with her led to her troubled relationship with her mother, which continues to this day.

Ava reveals that she was heartbroken to see Lucie end up in a similar state. She could see Jenny and Max’s marriage crumbling in front of her eyes, as both of them wanted Lucie to be something that would fit their idea of the child that they’d expected. Ava didn’t want Lucie to grow up feeling like she had disappointed her parents. She also believes that the idea of giving cochlear implants to Lucie should happen with her consent, which is something that Ava would have wanted for herself if she was in that situation.

Seeing things from Ava’s point of view impacts not only the jury but also the judge. Jenny and Max also get the full picture, realizing that Ava only had Lucie’s best interests at heart, even if she took a rather illegal route to make her point. In the end, they decide not to pursue a case against her anymore. They promise to be better parents, saying that they will learn sign language and not force the implants on their daughter. They even invite Ava to visit them and Lucie sometime, confirming that they have forgiven Ava for kidnapping their daughter, while also learning a very valuable lesson.